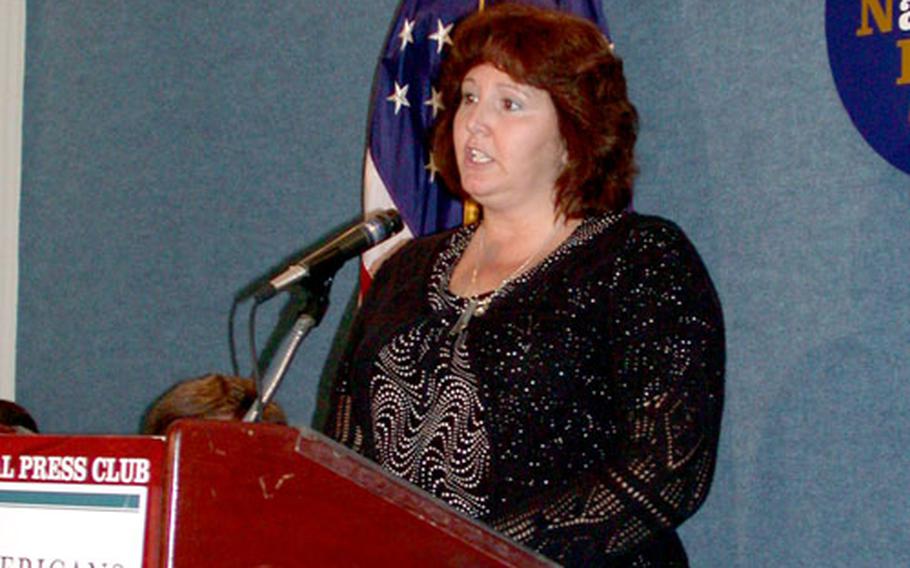 WASHINGTON &#8212; A pair of Wiccan widows has sued the Department of Veterans Affairs for not allowing them to put their religious symbol on their veteran husbands&#8217; gravesites.

The legal action, filed Monday by the Americans United for Separation of Church and State and several Wiccan congregations, asks for the VA to add the pentacle to the accepted list of religious symbols.

The National Cemetery Administration currently allows 38 different religious symbols to be put on veterans&#8217; headstones and plaques, but none for pagans or Wiccans.

At a news conference Monday, officials from Americans United said the petition for a Wiccan headstone symbol has been pending for more than nine years, and that the slow reaction time has grown from nuisance to religious discrimination.

&#8220;They have given convoluted explanations about their rule making, yet no coherent reason about why action was not taken,&#8221; said Barry Lynn, executive director of the group. &#8220;The VA is clearly dragging its feet, and that is why we are filing litigation to compel the agency to act.&#8221;

The VA had no reaction to the lawsuit. Officials have said that the department is currently reviewing their regulations for headstone symbols, but have offered no time line for when that may be completed.

The lawsuit, filed in the U.S. District Court in Wisconsin and the federal court of appeals, charges the department with violating Wiccans&#8217; First Amendment rights.

&#8220;Because their loved one lacked the good sense to subscribe to one of the department&#8217;s officially approved religions, the National Cemetery Administration forbids them to acknowledge the faith the way that other veterans&#8217; families do,&#8221; the lawsuit states.

Among those named in the lawsuit are Roberta Stewart, whose husband, Sgt. Patrick Stewart, was killed in combat in Afghanistan in 2005, and Karen DePolito, whose husband, Jerome Birnbaum, was a veteran of the Korean War who died last year.

Stewart said she wants Wiccan and pagan soldiers &#8220;just to have the same freedoms as any other soldiers have.&#8221;

Rev. Selene Fox, a senior minister at the Wisconsin-based Circle Sanctuary, said she has been working with VA officials to try and get the symbol accepted, but after years without progress she believes a lawsuit was the only way to force action.

According to 2005 Defense Department statistics, more than 1,800 active-duty servicemembers identify themselves as Wiccans.