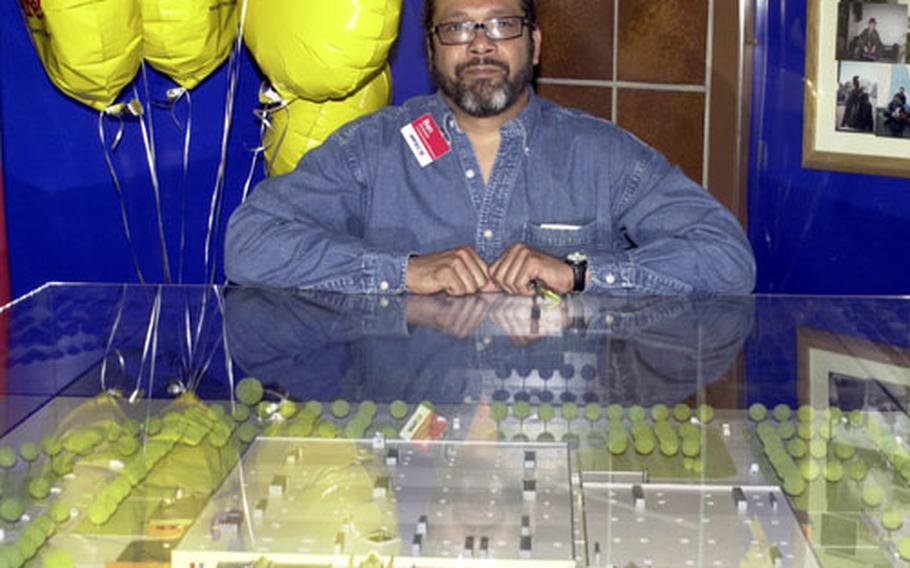 Ben Volkman, a hard lines (nontextiles) manager at the Vilseck, Germany, post exchange, with a model of the Grafenwöhr post exchange, due to open next summer. (Seth Robson / S&S)

GRAFENW&#214;HR, Germany &#8212; Wireless Internet, Starbucks coffee, a health spa and &#8220;retailtainment&#8221; are a few of the many attractions planned for a new on-post shopping complex due to open here next summer, the Army and Air Force Exchange Service says.

AAFES is still negotiating with businesses over space in the $29.5 million mall &#8212; rapidly growing in the middle of Grafenw&#246;hr&#8217;s main post &#8212; but several key components of the facility have been decided, Grafenw&#246;hr consolidated exchange manager Matt Mennona said Wednesday.

&#8220;A mezzanine floor above the food court will feature a coffee shop selling Starbucks coffee. And there will be Wi-Fi (wireless) Internet,&#8221; he said.

AAFES is also planning &#8220;retailtainment&#8221; that could include anything from musicians to car shows every weekend to draw in shoppers, Mennona said.

Is this what a soldier wants after a hard day&#8217;s training?

The mall will feature two competing cell phone shops, an optician, a beauty parlor/barber, an online gaming parlor and a food court including Popeyes, Charlie&#8217;s, Taco Bell, Baskin-Robbins and Subway, he said.

There will be a commissary with 27,000 square feet of sales space, PXtra (sporting goods) and a Toyland store built into the complex as well as a 12-pump gas station and a car park with space for almost 1,000 vehicles, he said.

AAFES is negotiating with several German businesses that might take space in the complex, including Nachtman Crystal and Bazooka, a chain of stores that sells snowboards, skateboards and street wear, he said.

&#8220;These things are still a work in progress. As we get closer, we will have more people who want to come in and we will try to get the best in there,&#8221; Mennona said.

The centerpiece of the mall will be the post exchange with 130,000 square feet of floor space &#8212; about three times the size of the Vilseck post exchange, he said.

The post echange will carry such lines as Est&#233;e Lauder and Clinique, which are not available at Vilseck, and there will be more branded merchandise from manufacturers such as Columbia and Jack Wolfskin, he said.

&#8220;It will become the shopping hub for Grafenw&#246;hr, Vilseck and Hohenfels. We anticipate people traveling from as far away as Hanau to take advantage of the all-in-one shopping,&#8221; he said.

The shopping complex is due to open in summer 2007, Mennona said.