‘Why was I arrested at all?’: Reservists investigated for using Army-provided housing allowance fight to clear names 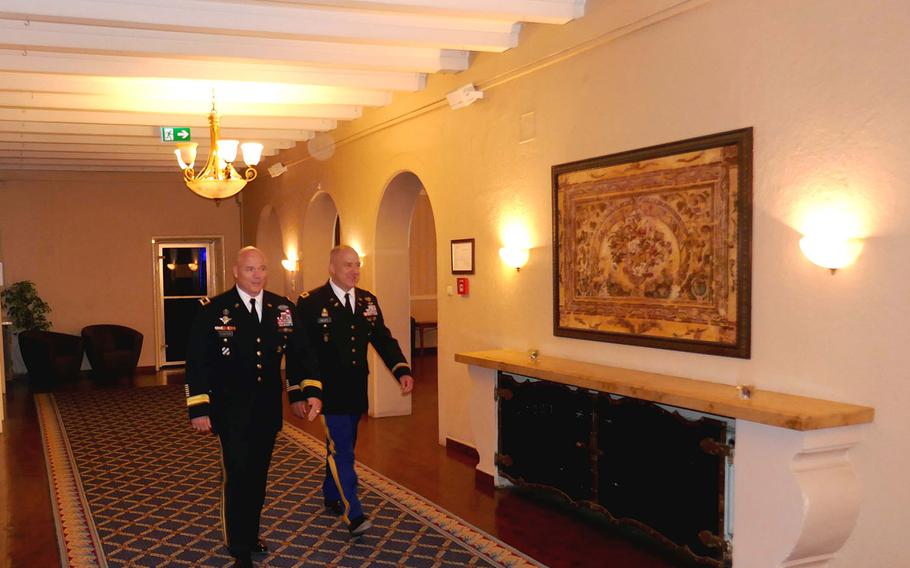 STUTTGART, Germany — A few hours before he was lauded by U.S. Africa Command brass for a 30-year military career that culminated in helping run day-to-day operations at his Stuttgart headquarters, Richard Gulley was read his rights, fingerprinted and treated like a crook by Army investigators.

Gulley, a reservist colonel with top secret clearances and a seat at the table on discussions about some of AFRICOM’s most sensitive missions, stood accused of getting a housing allowance for which Army finance officials say he wasn’t qualified.

But Gulley, like a growing number of reservists who have been snared in a dispute with the Army over their right to certain living allowances, says he is the victim of an investigative process in Europe that has run amok, as finance officials and agents from the Criminal Investigation Command are operating with little oversight.

“This is a complete dereliction of duty. I want them to know I will never stop fighting until my name is cleared,” Gulley said.

His case is much like that of seven Army Reserve officers who filed a lawsuit in federal court against the Army in April, accusing the service of “gross negligence” for withholding basic allowance for housing, or BAH, and imposing debts for past payments received. Like Gulley, the soldiers were criminally processed, accused of larceny and fraud and issued general officer reprimands. 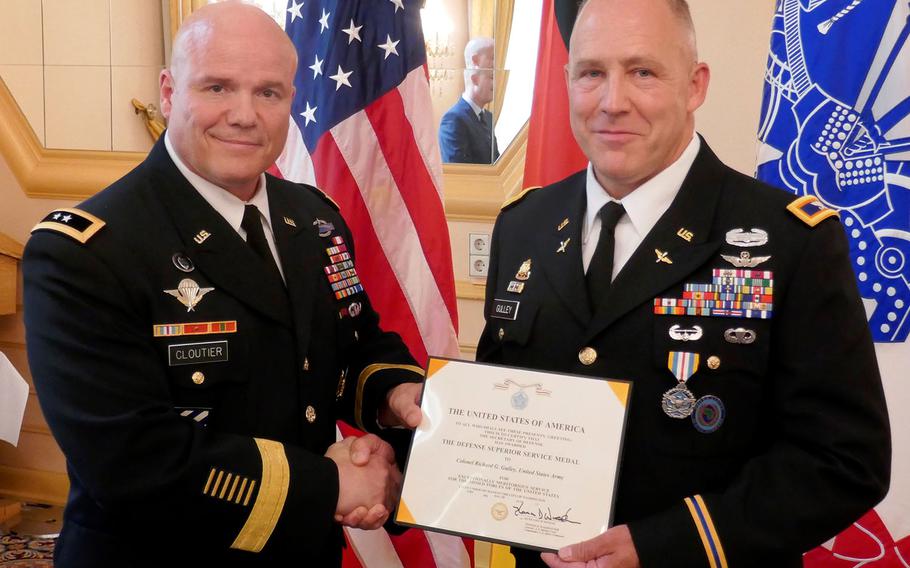 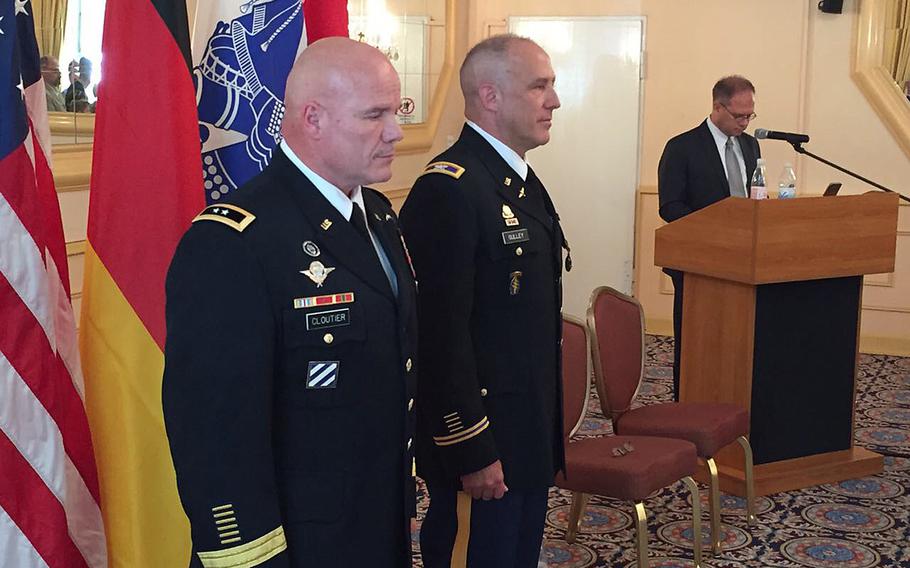 In recent years, the Army has made a point of cracking down on cases where it sees abuses in the allocation of allowances. In 2012, the Army’s 266th Financial Management Center in Kaiserslautern, Germany, won a servicewide award for a project that “eliminated erroneous payments of Basic Allowance for Housing,” producing more than $3.5 million in savings.

But in their push to find savings, Army finance officers are coming under scrutiny for improperly interpreting regulations and imposing rules designed for full-time, active-duty troops on reservists, who have different entitlements.

At least 140 reserve soldiers — and possibly as many as 350 — were caught up in investigations over the past couple years in Europe, according to the federal complaint filed by soldiers that could grow into a class action case. Millions of dollars could be at stake if the case moves forward.

Patrick Hughes, a Washington-based attorney representing at least seven soldiers in the lawsuit against the Army, says what’s missing is greater oversight from Congress on abuses by finance officials and agents for the Criminal Investigation Command, which is commonly referred to as CID, a throwback to the days when it was the Army’s Criminal Investigation Division.

“However, to date Congress has continued to defer to the Army and refused to take any substantial investigative steps,” said Hughes, a former judge advocate general who runs Patriots Law Group with a group of former military attorneys.

The Defense Financing and Accounting Service, which standardizes finance functions throughout the military, has already reviewed the case of one plaintiff, Col. Bradley Wolfing, and found that the Army erroneously denied Wolfing’s BAH benefits, Hughes said.

High honors and a mugshot

For Gulley, the investigation came to a head as he was preparing to retire from the Army. On June 30, AFRICOM chief of staff Maj. Gen. Roger Cloutier officiated at a retirement ceremony in Stuttgart with 100 people in attendance.

AFRICOM commander Gen. Thomas Waldhauser signed off on one of the military’s highest noncombat medals — the Defense Superior Service Medal — which was presented to Gulley during the ceremony.

“The distinctive accomplishments of Colonel Gulley reflect great credit upon himself, the United States Army, and the Department of Defense,” Waldhauser wrote.

It came only hours after CID agents read him his rights and an official letter of reprimand was put in his file.

As a well-paid commercial pilot in civilian life, Gulley said he can financially rebound from the $103,000 debt imposed by the Army in connection with the accusation that he shouldn’t have been paid BAH.

But the consequences are hurting him on the job. The Army never prosecuted, but every time Gulley pilots an international flight, he is stopped for questioning by police at customs. The electronic trail of charges means he’s been flagged. He also can’t obtain a gun permit, which compromises his ability to protect the cockpit, Gulley said.

“Why was I arrested at all? Why is it still on my record, and why do I get stopped at customs every single time?” he said.

Gulley also said he was subjected to harassment from CID agents, who staked out his home in Germany, followed him around and questioned neighbors back at his New York City home as part of their investigation.

In addition, scores of senior AFRICOM officials got sucked into the probe, Gulley charged.

“At one point, I had AFRICOM’s legal adviser threaten me and my wife. He started pointing his finger at me, shouting ‘Never talk to me again.’ My wife started crying.”

Other reservists describe similar tactics. One Army captain in Wiesbaden blamed his wife’s miscarriage on stress from the Army’s investigation, which resulted in massive debts and criminal probes.

An Army spokeswoman said it can’t comment on the matter, citing “ongoing litigation.”

At issue is the distinction between benefits owed full-time servicemembers and reservists.

When reservists mobilize overseas, they receive BAH because they cannot work the civilian jobs that pay their mortgages and rent. They also receive overseas housing allowance when ordered by the Army to live off post, as the plaintiffs were in Germany because of a lack of available housing. Most full-time troops get one or the other.

The benefit for reservists are spelled out in the Joint Federal Travel Regulations, which govern how allowances are paid: “A Service member called/ordered to active duty in support of a contingency operation is authorized primary residence-based BAH/OHA beginning on the first active duty day . . . This rate continues for the duration of the tour.”

A “Criminal Prevention Flyer” distributed by the CID office in Wiesbaden to various commands, and obtained by Stars and Stripes, gives some insight into the Army’s reasoning.

The January 2017 CID flyer described the issue of BAH fraud as a “hot topic” because of an increase in cases over the past few years.

“Due to this ongoing trend, the Army has been taking measures to crack down on BAH/OHA fraud by conducting local audits and targeted investigations with the assistance of local CID,” the memo said.

Typical fraud cases involve soldiers using a false home of record to obtain a higher BAH rate, claiming dependents when there are none or using false rental contracts to get higher OHAs.

The memo also refers to unique situations involving reservists. The problem, according to CID, begins when reserve soldiers deployed on an unaccompanied tour bring their families to join them at some point. Though the soldiers bear the costs of flying families over, the fact that the families have reunited is cause for severing payments, according to the CID flyer.

“The Soldiers fail to turn off these entitlements wherein they then begin to receive the unauthorized funds,” the memo says.

However, the memo does not cite the actual regulation the reservists violated. The CID agent responsible for the memo didn’t respond to a request for comment.

Reservist Maj. Robert Feldmeier, a senior Army defense counsel who represents Gulley, submitted a complaint to the inspector general in connection with accusations that finance and CID officials in Europe lack a basic understanding of the regulations.

So far, Gulley and his lawyer haven’t gotten a response.

Feldmeier, who accompanied Gulley during questioning by CID in 2017, has called the probe “wasteful and inept.”

“Stuttgart (CID) has spent hundreds of man hours and tens of thousands of dollars investigating a theory of criminal liability,” Feldmeier wrote in an official rebuttal to Gulley’s general officer reprimand. During one interview with CID, an agent “had, by her own admission, never read the JTR. Her total lack of knowledge concerning pay allowances, however, did not stop her and her colleagues from opening investigations into purported allowance fraud.”

Provisions in the JTR were put into place after the Defense Department urged Congress in 2006 to take action to avoid the financial hardship “that my clients and the other Reserve component members affected are enduring now,” Hughes said. “It is our claim that the Army is going against the very thing that the DOD fought for in the first place.”

Alleviating hardships on the reserve force became a priority during that time, when reservists were mobilized to Iraq and Afghanistan on lengthy deployments to support an active duty stretched too thin.

But Gulley, who served three combat tours and received the Combat Action Badge during one of them, said the treatment of reservists in the battle over benefits is an example of how they are treated as second-class citizens by the Army.

For some soldiers involved in the dispute, the consequences have been financially and professionally devastating.

Capt. Alexander Gardiner, who was activated from the U.S. for an assignment in Wiesbaden in 2016, says he also was wrongly investigated and is a party to the lawsuit seeking damages.

“It has basically ruined my career and any prospects of getting a job in the future that pulls a security check on me,” Gardiner said.

Already, Gardiner said, he had an offer for a federal job withdrawn when they saw his record.

In addition, an administrative flag has prevented Gardiner from signing up for required military education in order to get promoted. A letter of reprimand placed in his permanent file is “effectively killing my career,” he said.