Why do so many South Koreans hate THAAD? It’s complicated 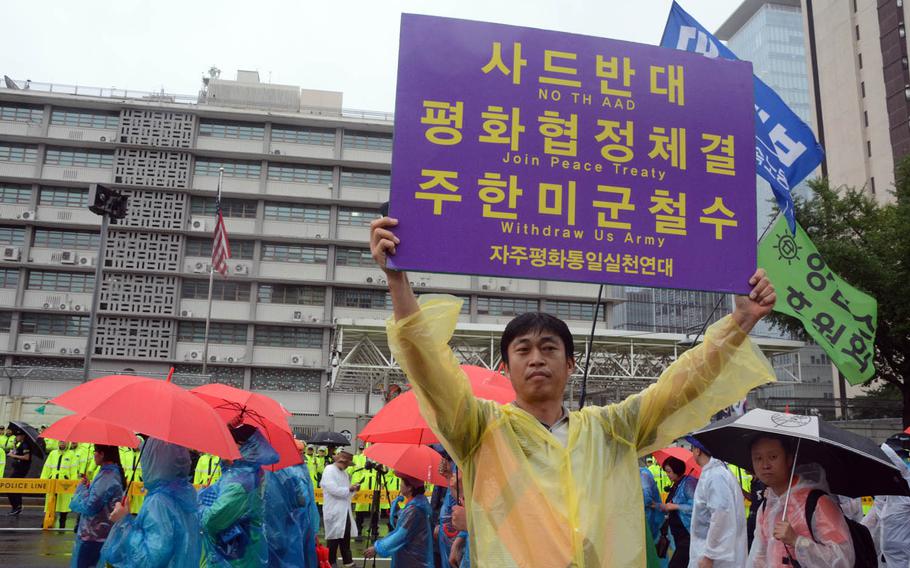 Buy Photo
A man holds a sign during a South Korean protest in front of the U.S. Embassy in Seoul, Tuesday, Aug. 15, 2017. The sign called for the withdrawal of the U.S. Army, a peace treaty with North Korea and an end to the deployment of the advanced missile defense system known as THAAD. (Kim Gamel/Stars and Stripes)

SEOUL, South Korea — How can South Koreans still oppose a U.S. missile-defense system even though the North shows rapid progress in its nuclear weapons program?

Or as Sen. Dick Durbin, an Illinois Democrat, told South Korean reporters earlier this year: “I believe that if I lived in South Korea, I would want as many missile-defense systems as possible to protect against the hundreds of ballistic missiles which North Korea could rain on the South should war begin. I don’t understand why that feeling does not dominate this conversation.”

Washington and Seoul agreed last year to station a Terminal High Altitude Area Defense system in a remote southeastern region to counter the growing threat from North Korea. But it has faced many hurdles that have delayed its full deployment on a former golf course in Seongju.

While recent surveys have a majority in support of THAAD, opposition remains widespread as evidenced by thousands of protesters who marched against it on Tuesday in downtown Seoul. They also called for an end to joint U.S.-South Korean war games slated to begin next week.

The way they see it, U.S. forces and military activities serve only to provoke North Korea instead of bringing peace to the peninsula, which is divided by the world’s most fortified border.

Add to that opposition from major trading partner China, which believes the radar could be used against its military and has been accused of waging a campaign of economic retaliation by curbing its vital tourism and other business interests in the South.

Many also were angered when President Donald Trump said in April that he would make South Korea pay $1 billion for THAAD, although U.S. officials moved quickly to reassure Seoul that wouldn’t happen.

“I’m against the THAAD deployment. It offers no advantage to South Korea,” said Song Wanseob, a 61-year-old farmer who traveled to Seoul from the southern city of Suncheon for Tuesday’s protest.

U.S. and South Korean officials insist THAAD is aimed only at protecting all of South Korea from the North as part of a layered defense system with already-positioned Patriot missiles that operate at a lower altitude.

The military began moving THAAD into place shortly with the radar and two launchers before the May 10 snap election that propelled President Moon Jae-in into office after his predecessor, Park Geun-hye, was ousted in a corruption influence-peddling scandal.

Moon, a liberal who campaigned on a promise to pursue peaceful dialogue with the North, initially suspended the further deployment of four additional launchers pending an environmental assessment. But he reversed his stance and said they should be temporarily moved into place after the North test-fired two intercontinental ballistic missiles last month.

Many marchers on Tuesday, however, said they believe that only peace talks with North Korea will ease rising tensions while U.S. forces and THAAD make the situation worse.

Much of the anger over THAAD stems from hatred of the ousted conservative government that favored a hard line against the North and made the initial agreement with the United States for THAAD.

South Koreans have lived under threat from the North for decades and generally don’t believe the communist state would launch an attack on the peninsula since that would likely mean mutual devastation for both sides.

Jin Soo-young, 33, said she believes North Korea’s missile tests are designed to force the U.S. and South Korea to negotiate for a peace treaty to replace the armistice that left the sides technically at war after three years of bitter fighting ended in 1953.

Some 28,500 U.S. servicemembers are stationed in South Korea to act as a “tripwire” against an attack from the North. That number increases with annual joint military exercises that are hated by Pyongyang, which considers them a rehearsal for invasion.

Jin said President Donald Trump was only repeating the failed policies of past U.S. administrations. While Trump has issued a string of bellicose warnings to the North, he also has pushed for strong economic sanctions and diplomatic pressure.

“In spite of their efforts, North Korea’s nuclear program has advanced and there’s still no peace after 70 years,” she added before continuing to march toward the U.S. Embassy in Seoul.

Opponents also argue any security benefits from THAAD are offset by deteriorating relations with China, which is the largest trading partner and source of tourism for South Korea.

Yonhap reported Wednesday that South Korea has proposed holding three-way talks with China and the U.S. over the issue.

The proposal for talks was made at a summit between Moon and Chinese leader Xi Jinping last month in Germany, said a Yonhap News Agency report citing “an informed source.”

It said China has not given a response, and South Korea’s presidential office has not confirmed the report.

China is also smarting from criticism by Trump that it’s not doing enough to rein in North Korea, although it has signed on to the past two U.N. Security Council resolutions tightening sanctions against Pyongyang.

Beijing says it opposes its communist ally’s nuclear program, but it fears measures that could cause the regime’s collapse because that could lead to a flood of refugees on its border as well as a possible expansion of U.S. influence in the region.

“Our government and our president are doing whatever the U.S. is asking them to do,” said protester Park Gum Lan, a 64-year-old writer. “THAAD can’t block North Korea’s nuclear threat. But China could bomb us because of THAAD.”

“I hope and believe the U.S. must take back their antagonistic policies toward North Korea,” she added. “Washington must not interfere with our efforts to achieve peaceful reunification.”

The fiercest opposition to THAAD is at its home base as local residents have staged near-constant protests in Seongju, a melon-farming region more than 125 miles south of Seoul.

In addition to concerns about radiation, they’re angry the decision was made without any consultation and believe THAAD’s location could make them a target.

The defense and environment ministries on Saturday conducted a joint site survey of electromagnetic radiation and noise from the system that they said showed levels were within legal standards.

Lt. Gen. Thomas Vandal, 8th Army commander, has said the site was chosen in close collaboration with the South Korean military to maximize its benefits. He said recently that the battery will protect 10 million South Koreans in the area outside of Seoul in addition to U.S. bases and vital seaports.

Vandal, who accompanied the ministry officials for the assessment on Saturday, also expressed regret over a widely circulated video that showed a U.S. soldier who appeared to be grinning and filming protesters with his cellphone while riding in a convoy in Seongju.

Vandal said the soldier likely wasn’t expecting protesters and had a nervous reaction, but it was unfortunate the whole situation occurred, according to U.S. Forces Korea’s public affairs office.

“Seongju residents refused to accept his apology, dismissing it as ‘meaningless,’ Yonhap reported.