Who will help Iraq’s widows? 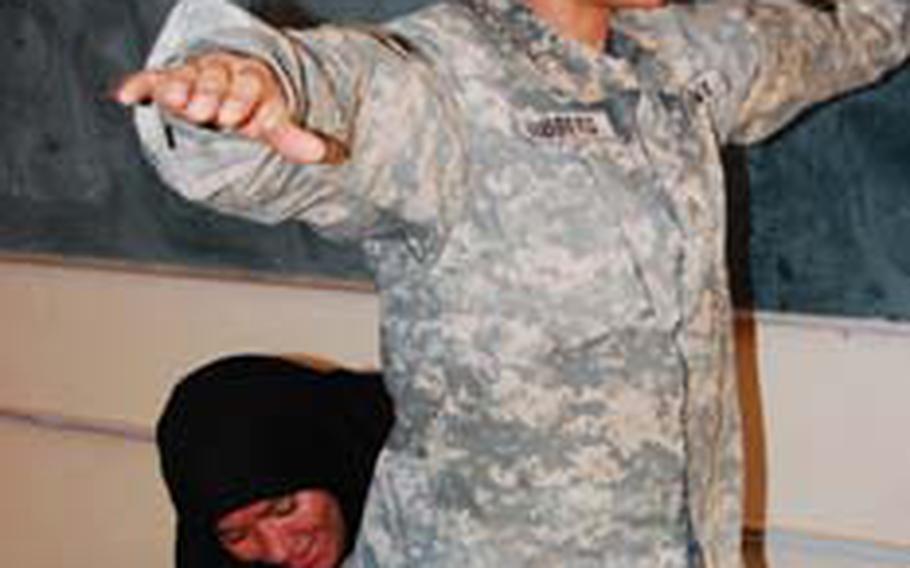 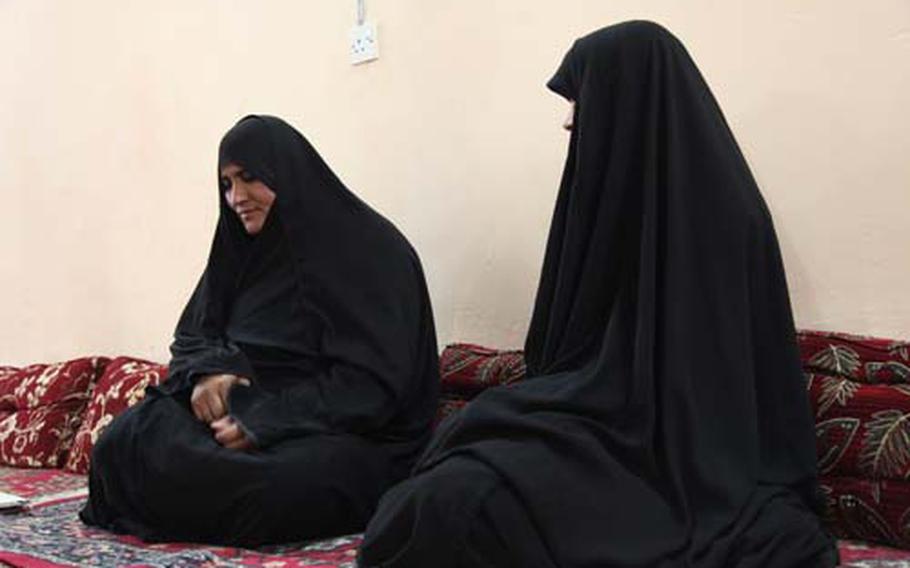 Fawzia Abdalaabi Hassan, left, whose husband was killed in a tribal dispute 12 years ago, finds herself in a similar situation as many Iraqi widows. With no government help and no family to support her, she says she is forced to rely on handouts and has already married off her two teenage daughters and taken her 12-year-old son out of school. (Samantha R. Ciaramitaro/Courtesy of the U.S. Army) 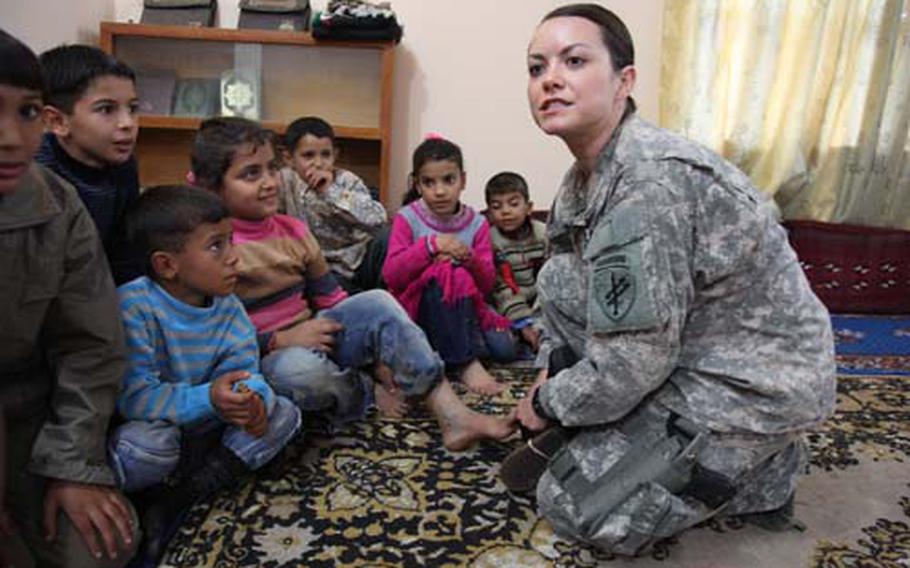 First Lt. Nicole Siemer, an American civil affairs officer, launched a program to help widows in Najaf register for government assistance programs last summer. Siemer expressed frustration that programs for women were given low priority by the military. "We&#39;re talking about more than half the population," she said. (Samantha R. Ciaramitaro/Courtesy of the U.S. Army)

BAGHDAD &#8212; The last time Safia Ismail talked to her husband over the phone, she told him not to come for her and their two daughters.

Fighting had engulfed their Baghdad neighborhood in that bleak spring of 2006, trapping them in the house. But the streets were too dangerous, she told him. The road from Ramadi, where he had gone to tend to his extended family, was worse. Wait, she told him.

But he said he was already in the car, and then he disappeared somewhere along the way. She never found his body.

Left to fend for herself and her daughters after her brother was killed later that year, Ismail was, in one sense at least, far from alone. According to one study cited by Iraqi government officials, some 900,000 widows live here, or 1 in 10 women over the age of 15, among the highest percentages in the world. Many, like Ismail, will never know what happened to their husbands.

Beneath the renewed sectarian rhetoric and political maneuvering of the national parliamentary election held Sunday, the plight of Iraq&#8217;s widows points to the scale of the social and humanitarian crises that are still largely unaddressed as the country struggles toward some kind of stability.

&#8220;Right now, the government is just sitting quietly and doing nothing to help,&#8221; says Shatha al-Qaysi, who runs a small human rights organization in Nasariyah in southern Iraq. &#8220;So if a widow is lucky, she will get some help from her family or a charity, which happens to about one in 1,000. The other options are she can be a beggar, she can sell plastic bags, she can be a servant or she can be a prostitute.&#8221;

Government assistance programs, which pay widows as little as $50 a month plus $13 per child, depending upon the husbands&#8217; jobs, are plagued by corruption and waiting lists that can stretch for years, aid officials and some in the government say. Most widows lack basic job skills and in a conservative society with high rates of unemployment, what jobs are available usually go to men.

All, officials say, are common themes.

But these are just ideas.

The women&#8217;s ministry has no dedicated budget and operated last year on the equivalent of about $450,000 transferred from the prime minister&#8217;s office. Its instructions, Ameen says, are to seek funding for programs from outside sources such as the U.N. or international aid agencies. They&#8217;ve found few takers.

A ministry request to the Iraqi parliament last year to raise the minimum welfare payment for widows to $150 a month from $50 was rejected on the grounds the country couldn&#8217;t afford it. Stories abound of corruption and bureaucratic indifference within the Ministry of Labor and Social Affairs, which administers the program.

Abdulah al-Lami, a spokesman for the Ministry of Labor and Social Affairs, downplayed those concerns.

Still, few contend that the government&#8217;s response has been adequate.

In Iraq, a large population of widows is nothing new. The toll of Iraq&#8217;s most recent war only adds to a tally started decades ago during the Iran-Iraq War of the 1980s, the 1991 Gulf War and Saddam Hussein&#8217;s brutal crackdowns against Kurdish and Shiite rebellions.

But under Saddam &#8212; at least until sanctions and economic collapse limited the regime&#8217;s ability to provide social programs &#8212; widows whose husbands died in service to the government were treated well, receiving a reliable monthly stipend and in many cases a house and a car.

While many blame the current government for a response that pales in comparison, some say the American military also has a responsibility to do far more to address the fallout of the U.S.-led invasion.

Over the summer, U.S. Army Lt. Nicole Siemer, a civil affairs officer based in southern Iraq, launched a program to help widows in Najaf register for government assistance. Many widows, she found, lacked death certificates or other paperwork required for the applications. Many couldn&#8217;t read or write.

Funded by the State Department and employing local lawyers, the program helped some 300 widows sign up for benefits. But by the time Siemer left Iraq in December, none of the widows had started receiving their money.

But Siemer, who estimated it would cost about $900,000 to run similar programs across southern Iraq, was unable to secure further U.S. funding. The main pool of money used by the military to pay for reconstruction and relief efforts &#8212; known as the Commander&#8217;s Emergency Relief Program &#8212; is designed as a way for officers to use cash to head off potential violence.

Though billions have been spent through the program on everything from schoolhouses to flocks of sheep &#8212; much of it going to bolster the authority of friendly tribal sheiks and local leaders &#8212; widows aren&#8217;t seen as a sufficient security threat.