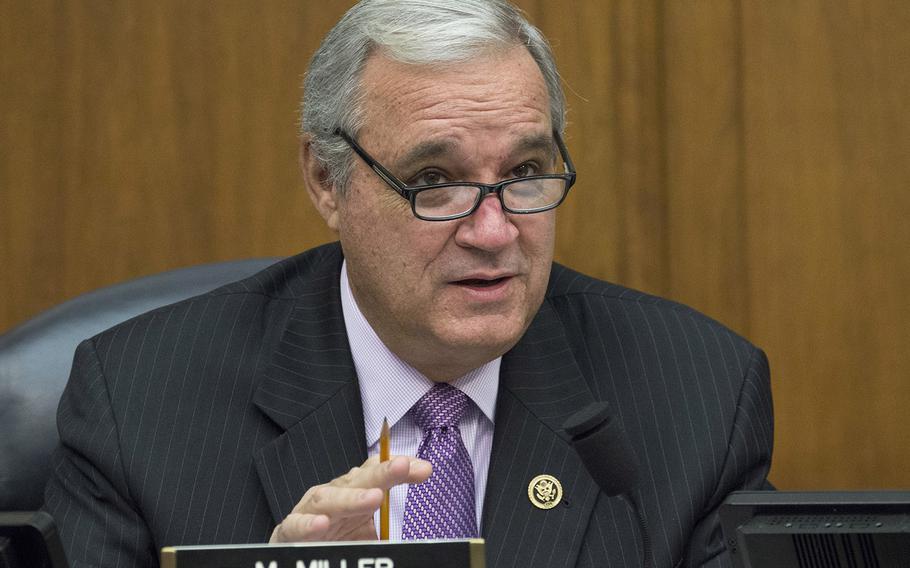 Buy Photo
Rep. Jeff Miller, R-Fla., then the chairman of the U.S. House Committee on Veterans Affairs, speaks at a hearing in December, 2015. (Joe Gromelski/Stars and Stripes)

Though President Donald Trump is notoriously difficult to predict, here are some possible contenders.

Jeff Miller’s name has been floated as a potential VA secretary nominee since Trump became president, and it emerged again Thursday quickly after Jackson withdrew.

Miller, 58, a former Republican representative from Florida, retired from Congress in 2016 after eight terms. He was chairman of the House Committee on Veterans’ Affairs for six years during former President Barack Obama’s administration, and in that role became known as a harsh critic of the VA who despised wrongdoing by the agency’s employees.

Miller’s portrait now hangs in the committee room – the site of numerous tense exchanges between him and former VA Secretary Bob McDonald.

Trump is seriously considering Miller for the job of VA secretary, multiple news outlets reported Thursday, citing a senior White House official. He already has one strong tie to the department – his former spokesman, Curt Cashour, is the VA press secretary.

At an event arranged by the Wounded Warrior Project on Thursday, Trump praised Robert Wilkie, whom he tapped in March to lead the VA until the Senate confirms a permanent secretary. Wilkie, 55, came to the VA from the Pentagon, where he worked as undersecretary of personnel and readiness.

There were initially doubts about whether Trump had the authority to appoint Wilkie as acting secretary, bypassing VA Deputy Secretary Tom Bowman, who was next in the chain-of-command. But critics appear to have retreated on the issue.

Wilkie walked into an agency reeling from the firing of former VA Secretary David Shulkin and the chaos and infighting that led up to it.

Joe Chenelly, director of AMVETS, initially called on Trump to remove Wilkie amid the confusion about whether Wilkie should legally be running the agency. In an apparent turnaround Thursday, Chenelly said: “We like Wilkie.”

“We’re happy Wilkie has kept Bowman on,” he said. “If it’s going to be Wilkie, then nominate Wilkie.”

It’s possible Trump could decide to make him the nominee. If he does, it creates the new question of who would take over Wilkie’s duties at the Defense Department.

Like Miller, Pete Hegseth was a contender for VA secretary when Trump was making his first selection.

Hegseth, 37, is an Iraq War veteran, a weekend co-host on Fox & Friends, and the former CEO of the conservative group Concerned Veterans for America, part of the Koch brothers’ political network.

CVA has gained influence and access since Trump took office, and the president has reportedly taken Hegseth’s opinion on VA matters into consideration. The Washington Post reported last month that Trump called Hegseth during a meeting with Shulkin to ask his input on legislation that would reform how the VA handles private-sector medical care.

Hegseth addressed the possibility of his nomination Thursday on Fox News.

“If the president asks me to serve, great. But he hasn’t until this point, so we’ll see,” he said.

In a public statement Thursday, Chenelly implored the White House to include women in its search for the next nominee.

Since the VA became a Cabinet-level department in 1989, there have been nine secretaries and four acting secretaries, none of whom were women.

“It’s important that he considers women in this position,” Chenelly said. “There are really good candidates out there who are women.”

According to the latest VA data, women veterans comprise almost 10 percent of the veteran population in the United States, and that number is growing. A recent study from the National Academy of Sciences, Engineering and Medicine shed light on cultural barriers keeping women veterans from accessing the VA, including that they’re often mistaken for spouses or cat-called in waiting rooms.

Last year, the veterans community saw a rise of women veterans into leadership positions – two of the largest veterans service organizations are now led by women.

During Trump’s transition into the presidency, at least one woman was under consideration for job of VA secretary – Sarah Palin, the former governor of Alaska and the Republican vice presidential nominee in 2008.