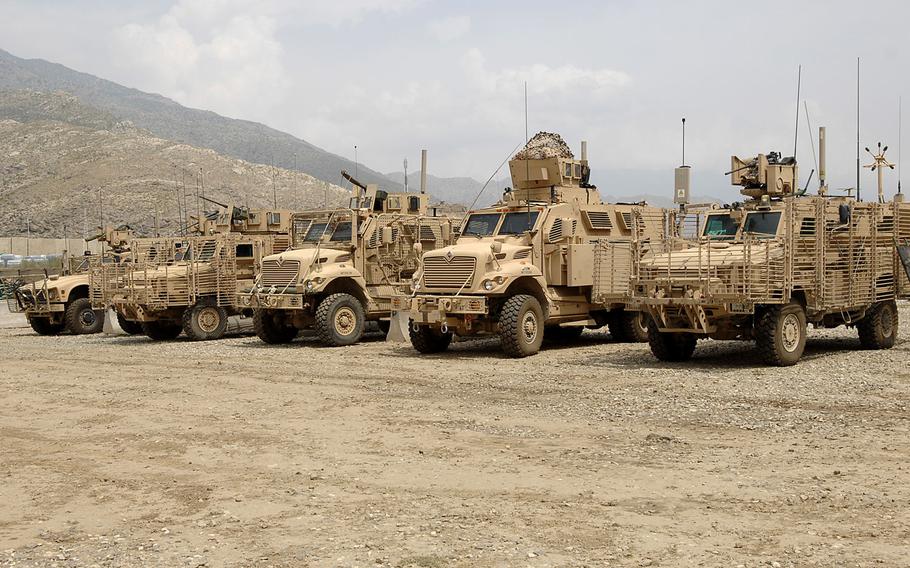 Mine Resistant Ambush Protected (MRAP) vehicles stand in a row before going out on a mission in eastern Afghanistan. A whistleblower case alleges that a defense contractor, Navistar, bilked the Pentagon out of more than $1 billion on a contract to build MRAP vehicles. (Michael Abrams/Stars and Stripes)

A defense vehicle manufacturer has been accused by one of its former employees of bilking the Pentagon of $1.3 billion by vastly overcharging the Marine Corps for components of Mine Resistant Ambush Protected (MRAP) vehicles used by troops in Iraq and Afghanistan.

The whistleblower case was orginally brought six years ago by Duquoin Burgess, who worked in Navistar Defense’s contract management department for over three years until October 2012.

Burgess alleged that his former employer and its parent company, Navistar International Corp., forged invoices, catalog prices and other documents to win the contract to build MRAP vehicles for the Marines. The government joined part of the case against Navistar Defense in September.

Navistar was awarded a contract in 2007 to build several hundred MRAP vehicles for the Marines to replace the Humvee, which was vulnerable to roadside explosive devices, the Department of Justice said Wednesday.

Over the next several years, the government paid Navistar Defense around $9 billion, and the company produced around 4,000 vehicles. But nearly $1.3 billion of the money paid out under the contract for parts including suspension systems, engines and chassis were based on fraudulent documents, the complaint said.

The fraudulent documents allegedly masked that the vehicle components Navistar Defense was selling to the Marine Corps either had no commercial sales history at all or, when they did, were worth about half the price the company was charging the government for them, the complaint said.

The company charged about $250,000 for each chassis, but sold an identical product for half the price to other customers, the lawsuit alleged. The Marine Corps paid Navistar Defense around $30,000 over the usual price for suspension systems, racking up nearly $120 million in overcharges for that component alone, the complaint says.

“Navistar Defense exploited the government’s need for vehicles that would provide American soldiers with the protection they needed in the field, and fraudulently charged the government prices far exceeding those it charged other customers for the same parts and components,” said the complaint, which was made public this week.

Navistar executives knew about the fraud and were actively involved in it, Burgess, the whistleblower, alleged.

“The Department of Justice will hold accountable those contractors who falsify information and thereby cause the military to pay inflated prices,” U.S. Assistant Attorney General Jody Hunt said in a statement Wednesday. “We will take steps necessary to protect the military’s procurement process from abuse.”

Lyndi McMillan, a Navistar spokeswoman, told Bloomberg News Wednesday the whistleblower’s complaint had no basis in fact or law.

“We believe our pricing was fair, reasonable and competitive, and we are disappointed the government has chosen to intervene in this matter,” McMillan said in an email to Bloomberg. “The company intends to defend itself as necessary and appropriate.”

The case could take three to four years to come to trial, said Vince McKnight, a lawyer representing Burgess.