While US pins peace hopes on talks with Taliban, Karzai snubs both 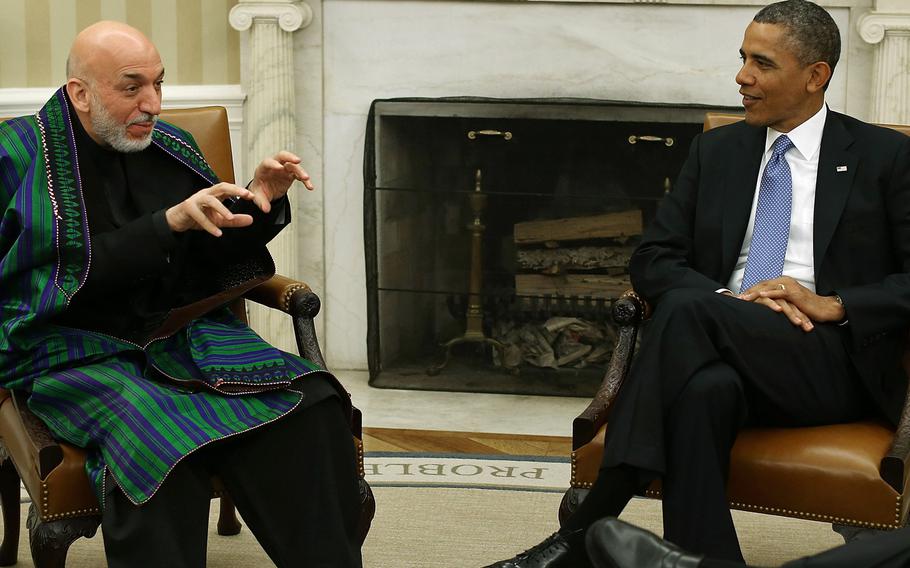 KABUL — An announcement intended to signal hope for an end to the war in Afghanistan may have derailed peace negotiations before they even started and bolstered the Taliban insurgents.

Since the opening of a Taliban office in the Gulf nation of Qatar on Tuesday, Afghan President Hamid Karzai has not only banned his peace emissaries from visiting the office, but he’s also suspended talks with the U.S. aimed at securing Kabul’s approval to keep a contingent of American troops in the country after the current mission ends next year.

The Taliban used the office opening as a public relations coup — raising their flag and acting more as a government-in-exile rather than a guerrilla movement.

The news stole the spotlight from Karzai, who announced Tuesday in Kabul that Afghan forces were assuming responsibility for security throughout the country from the U.S.-led NATO force. He appeared infuriated that the insurgents were flying their flag over their office in Qatar’s capital of Doha and referred to the mission as “The Islamic Emirate of Afghanistan” — as Afghanistan was officially known when the Taliban were in power from 1996-2001.

Shortly after the opening of the office and just hours after he said the Taliban were welcome to participate in next year’s national elections, Karzai barred members of the country’s High Peace Council from traveling to Qatar to engage in talks.

Although the State Department expressed opposition to the name — and the Qataris hastily removed the plaque — Karzai nonetheless suspended negotiations over a bilateral security agreement with the United States, which would provide legal protections to American soldiers in Afghanistan and is a crucial condition for any U.S. troop commitment after 2014, when all NATO combat troops are to leave.

“It’s a bumpy road, we always knew it would be,” State Department spokeswoman Jen Psaki said Wednesday. “But we’re focused on moving forward because we know political process is the best path forward.”

Through their provocative office opening, the Taliban managed to gain legitimacy while giving up nothing, said Kate Clark, an analyst with the Kabul-based Afghan Analysts Network.

“There’s been no concessions [from the Taliban] and the Americans look desperate,” she said, adding, the opening ceremony “was very public, very official, very respectful — it looked like an official embassy and that was the problem. It’s an insurgent group and it looked like a government-in-waiting.”

Despite the high hopes of the office opening being a major milestone to end the war, some observers say all of the attention paid to the ceremony is overblown. After all, the Taliban representatives who addressed the media on Tuesday were the same ones who have lived in Doha for years.

An insurgent offer, reported by The Associated Press and others to exchange U.S. Army prisoner of war Sgt. Bowe Bergdahl for five captured senior Taliban officials is one Washington has already rejected, said Alex Strick van Linschoten, an author and researcher who has spent years in the region studying the Taliban.

“What has really changed here? Not that much,” he said.

The episode has also left the Obama administration in an awkward position, still claiming the peace process is Afghan-led, even though Kabul is currently boycotting any talks and the Taliban have not committed to speaking with the Karzai government.

This late in the game, the Taliban don’t see it as necessary to talk to Karzai, who must leave office in April after presidential elections, said Waheed Mujhda, a political analyst and former Taliban official.

“For the current government, there are just 10 months remaining before elections and maybe the opposition parties will be running the country,” he said. “I don’t think there will be results from these peace talks in the next 10 months.”

While it may seem odd to start peace negotiations without the participation of the Afghan government, the Taliban have consistently dismissed Karzai’s potential role in peace talks, Strick van Linschoten said.

The insurgents consider that Afghanistan is under foreign occupation and refuse to recognize the “collaborationist” authorities.

Taliban officials at the Doha office did not answer their phones Thursday.

If peace talks do start anytime soon, violence is actually likely to rise as both sides dig in to strengthen their bargaining position. This was highlighted by a rocket attack also on Tuesday — the day the Taliban office opened — on Bagram Air Base, one of the largest military facilities in Afghanistan, which killed four U.S. troops, Mujhda said.

“This office can create peace in Afghanistan, but you shouldn’t think 'yesterday they opened the office, today we have talks and tomorrow we have peace,'” he said.