Where US troops train in Germany, Afghan refugees are recovering from war 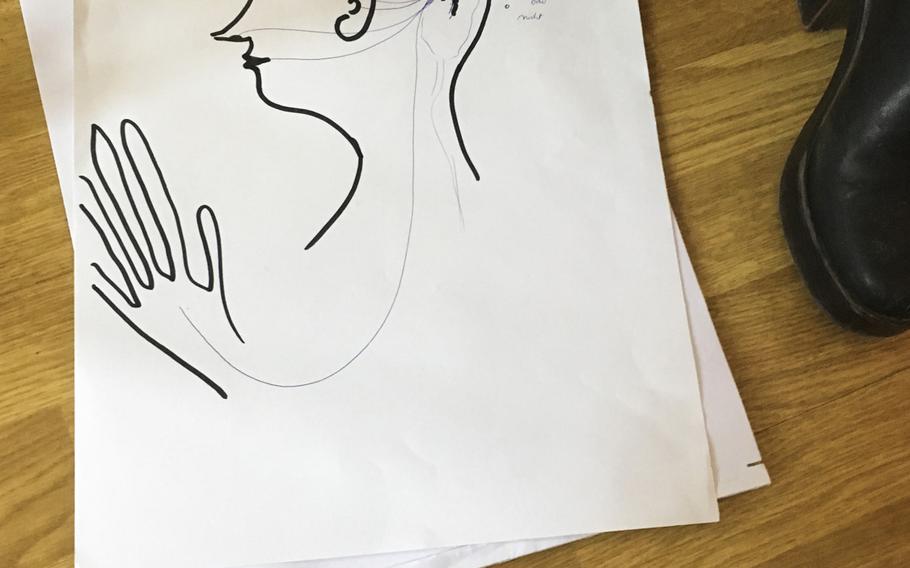 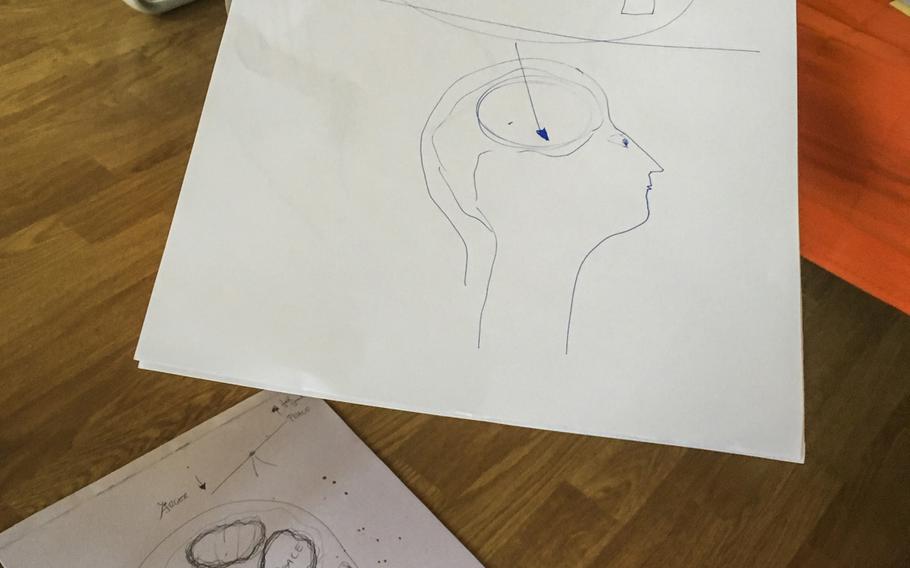 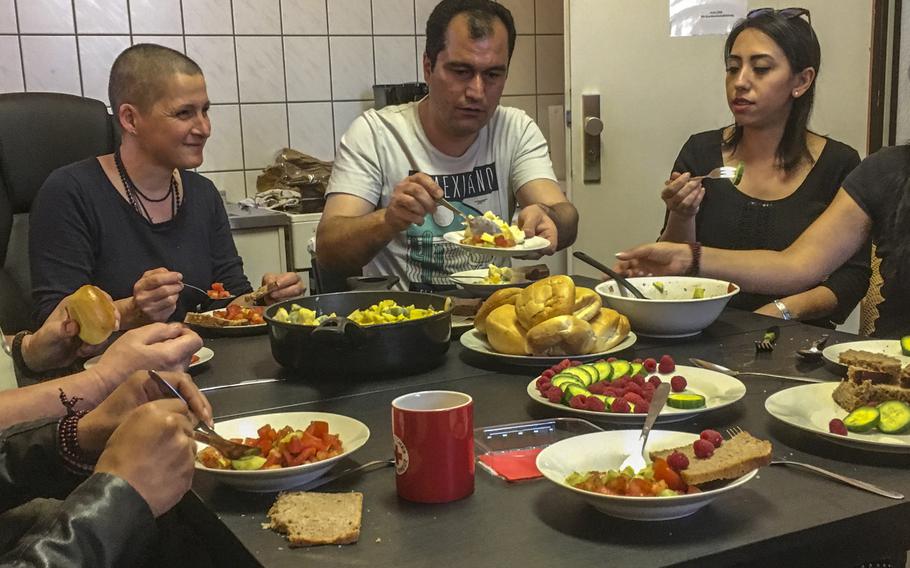 Red Cross psychologist Susanne Sage, left, her patient Farshid Salawti, center, and a translator eat dinner after a counseling sessions in Kaiserslautern, Germany, on April 19, 2018. Salawti, an Iranian migrant, is an asylum-seeker who is one of 60 to 80 patients seen by Sage since the fall of last year. (J.p. Lawrence/Stars and Stripes) 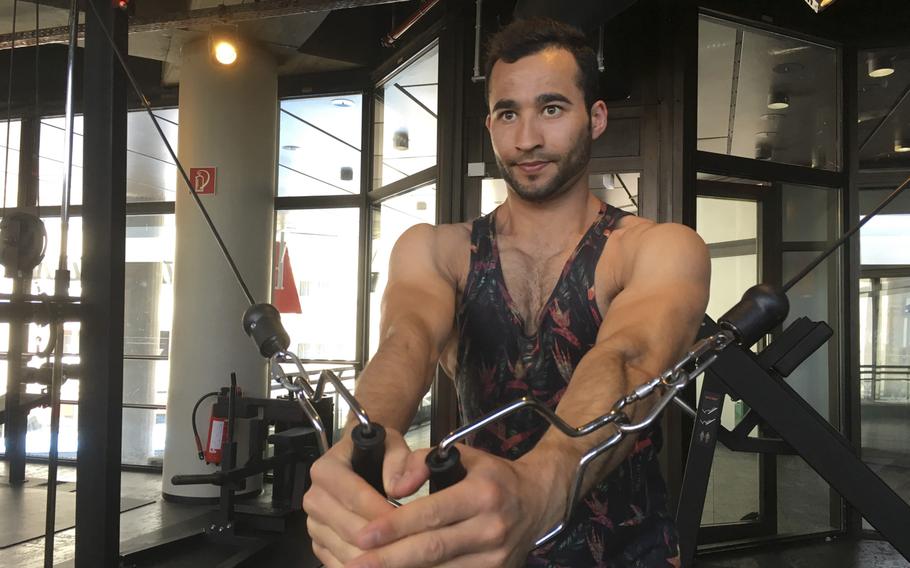 Afghan migrant Nematullah, 20, works out daily in a gym in downtown Kaiserslautern as he awaits the appeal of an asylum decision on whether he can stay in Germany. Nematullah, who goes by his first name, is one of an estimated 250,000 Afghan asylum-seekers in Germany. (J.p. Lawrence/Stars and Stripes) 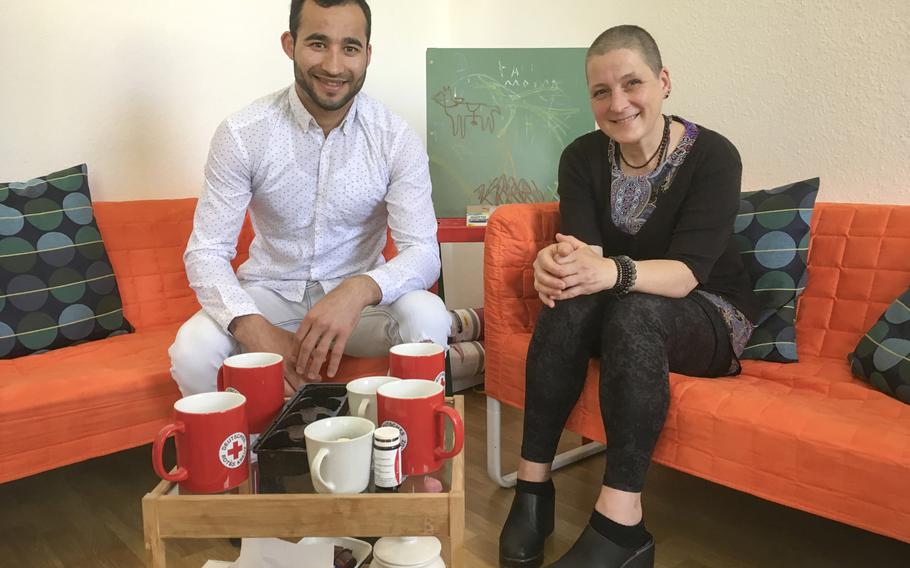 KAISERSLAUTERN, Germany — In the western German province of Rheinland-Pfalz, the mental trauma of war affects not only some U.S. troops stationed on the five military installations here, but also some of the 80,000 refugees who have arrived over the past five years.

For most, their first stop is through the country’s central processing center — the former U.S. Army Warner Barracks — before coming to German towns such as Kaiserslautern, where the Catholic charity Caritas says that 230 refugees live in apartments formerly occupied by U.S. troops during the Cold War.

In 2016, Europe experienced the largest migration of refugees since World War II. The influx of war refugees with psychological wounds such as post-traumatic stress disorder prompted the Red Cross in Kaiserslautern to offer mental health services in September.

Red Cross psychologist Susanne Sage said she has treated 60 to 80 refugees since the trauma counseling center in Kaiserslautern opened.

Her patients are often very lonely and have deep fear and anxiety, said Sage, 52. They are mostly from Syria, Iraq and Afghanistan. They often struggle with a new language. Most are men. Often, the women she treats were raped, she said.

Refugees suffer from PTSD at rates 15 to 30 times the average, according to a 2017 report in the journal World Psychiatry.

Many refugees who come to Sage are baffled by what’s happening in their brain, she said. As a psychologist, she cannot prescribe medication, but she tries to teach her patients about mental health, mostly in individual therapy but at times in groups.

Sage runs the Red Cross practice with a translator from Iran and a volunteer from Syria. When the language barrier is too great, Sage sometimes gets a sketch pad and draws what she wants to say. Lines going from the eyes, ears, nose and mouth represent the senses reacting to something and sending fear into the brain.

The road to recovery One of her patients, Nematullah, grasped his hands tightly as he answered questions from Sage one spring morning. Nematullah, who like many Afghans goes by one name, has been going to Sage’s therapy since January.

When the 20-year-old first came to her office, he suffered from depression, Sage said. He slept poorly. When he did speak, he described vivid nightmares and seemed lost in his memories. “He wasn’t always there,” she said.

Nematullah is one of about 250,000 Afghan asylum-seekers in Germany. Nematullah, an Afghan of Uzbek descent, said he grew up in the northern province of Faryab, which the Taliban has mostly controlled since 2017.

After 30 years of war, about 75 percent of all Afghans have fled within the country or abroad. Nematullah said he fled the Taliban on a path that took him to Iran, Turkey, Greece and finally Germany.

When Nematullah tried to talk about his father, who died after he left Afghanistan, Sage said the memory was too painful for him.

“He would prefer to be wounded in his body than in his soul,” she said. “The memories are much worse for him.”

Another of her clients, Qadir Jafarie, 33, said he left Afghanistan when the Taliban took over in 1996. Jafarie, an Afghan of Hazara descent, said he arrived in Germany three years ago. He shared photos on his cellphone of dead relatives. Sage said Jafarie has difficulty concentrating. He has schizophrenia, Sage said, his mind is often disassociated and his senses detached from reality.

Sage held a dinner of tomato salad and bread for her patients after sessions one night. Jafarie sat at the foot of the table. He said therapy allowed him to leave his apartment. He spoke and laughed with others at the dinner.

“Now he can go outside and speak to people and enjoy it,” Sage said. “He goes on walks around his apartment.”

Suspicion of crimes Jafarie and the other migrants at the dinner were from villages by the town of Pirmasens, about 20 miles south of the Army’s Landstuhl Regional Medical Center. The town recently made national news when it decided not to take in more refugees.

Sage said crimes attributed to migrants have hardened the hearts of Germans. An Afghan refugee in Kandel, 20 minutes from the Germersheim Army Depot, was arrested in December after police said he stabbed and killed his teenage German ex-girlfriend in the town’s drugstore. The refugee is in custody and now awaits trial.

After welcoming refugees in 2015, Germany now gives asylum to a lower percentage of Afghans. The Passauer Neue Presse newspaper put the approval rate at 48 percent of applicants last year, compared to 78 percent in 2015.

Most of her patients have had asylum applications rejected and are now waiting as they appeal the decision, Sage said.

Still, about 60 percent of Afghans who appeal their rejection succeed and gain refugee status, according to German broadcaster Deutsche Welle.

Nematullah, who was rejected, said he’s learning how to cut hair as he waits on his appeal.

As long as he is in an apprenticeship program, he cannot be deported. He is ineligible for benefits, such as language training and family reunification, that the German government provides for refugees allowed to stay in the country.

However, clashes between government forces, supported by the U.S.-led military coalition, and Taliban and ISIS guerrillas have intensified in the past two years and many analysts expect an escalation during this year’s fighting season.

“The deterioration in Kunduz and even Balkh is undermining the ‘secure north’ narrative – and the latest waves of attacks even [undermine the narrative] about ‘safe Kabul,’ ” said Thomas Ruttig, co-founder of the Afghanistan Analysts Network and a native German.

Sage said she writes testimonies on behalf of her patients for their appeals to stay in Germany. She said she knows migrants may be lying to her about their condition, either for pragmatic reasons or to protect themselves from enemies or painful memories.

Sage said the truth is in the body language of those who have been impacted by war.

“Their anxiousness and fear resides inside them,” Sage said. “Their soul is hidden somewhere far away from them.”