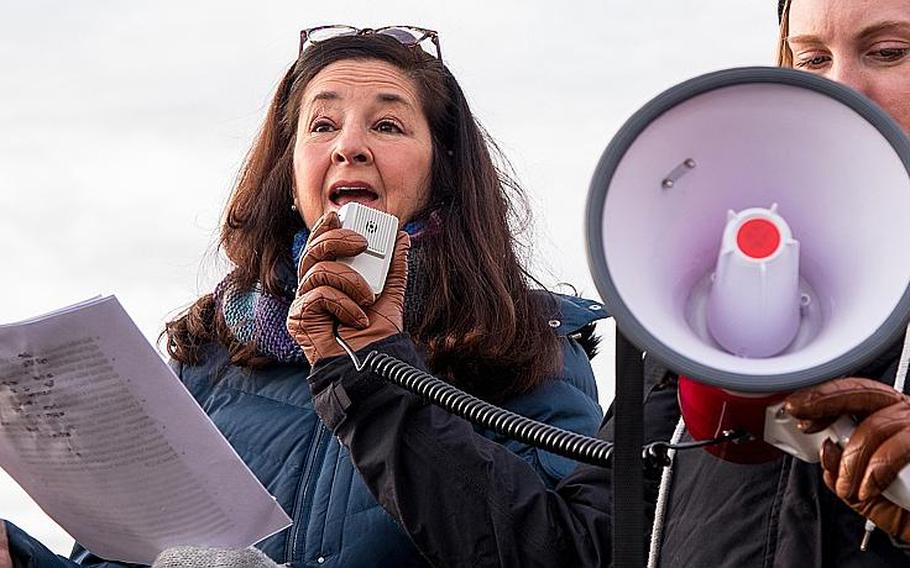 Buy Photo
Monica Medina, an Army veteran and former special assistant to the secretary of defense for former Defense Secretary Leon Panetta, speak Monday, Jan. 8, 2018 outside the Pentagon during a demonstration against sexual harassment and assault in the military that organizers called the #metoomilitary Stand Down. The event, organized by the Service Women's Action Network, was held near the Pentagon's Metro entrance as Defense Department workers entered the building. (Corey Dickstein/Stars and Stripes)

ARLINGTON, Va. — The moment was the most traumatic in her life. The last thing Nichole Bowen-Crawford wanted to do was fly across the country to stand in the bitter cold outside the nerve center of the nation's defense system and tell everyone who would listen about being assaulted by a fellow soldier and then silenced by her superiors.

But she believed she had to speak up and encourage others like her to break their silence.

On Monday — the morning after millions of viewers watched women in Hollywood declare at the Golden Globe awards that the time for sexual assault and harassment was up – she summoned the courage to fight through post-traumatic stress and step back into the limelight. She joined a small cadre of military survivors who demanded accountability from Pentagon leadership that has failed to end sexual assault in the Armed Forces.

Her hope, she said, is that the #MeToo movement that has swept through Hollywood and the halls of Congress will take hold within the tight ranks of the male-dominated U.S. military, where a culture of sexual assault, harassment and retaliation for those who come forward remains pervasive.

Despite efforts to stem military sexual assault in recent years, the Pentagon estimates more than 6,100 sexual assaults took place in fiscal year 2016, a figure similar to the two previous years and based only on data from those who've come forward to report. It also assesses that two-thirds of victims don't report, which means there were more than 18,300 sexual assaults for each of those years.

The same report found that only about 4 percent of cases resulted in conviction.

In the meantime, six out of every 10 who reported sexual assault faced retaliation, often in the form of stigma, accusations of personality disorder and being discharged with bad paper that would end careers and strip them of their veterans benefits and job prospects in the civilian world, said Lydia Watts, the CEO at Service Women's Action Network, or SWAN, which organized Monday's protest. 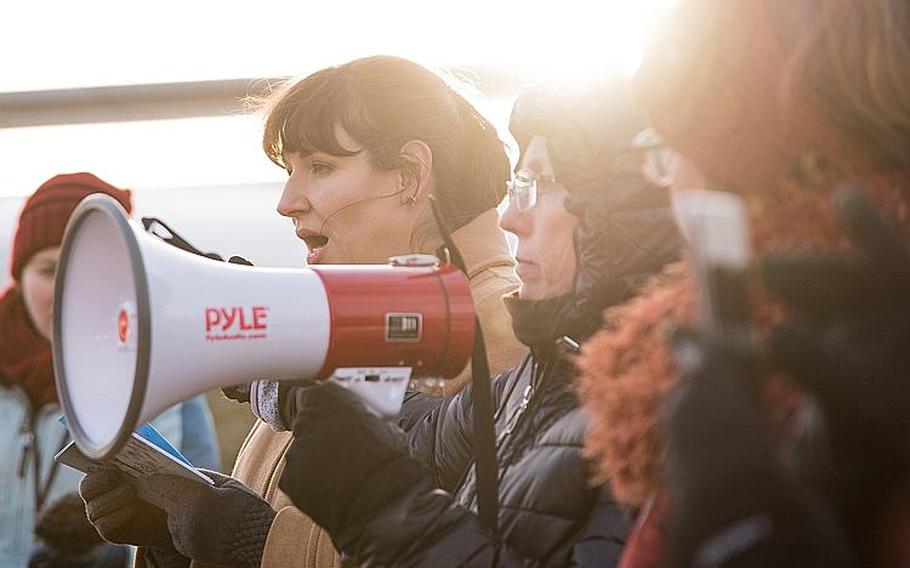 Buy Photo
Army veteran Nichole Bowen-Crawford, left, speaks Monday, Jan. 8, 2018 during a demonstration outside the Pentagon. She talked about being sexually assaulted during a deployment to Iraq and said she was silenced by her commanders. Bowen-Crawford traveled from Washington State to participate in the #metoomilitary Stand Down organized by the Service Women's Action Network, an effort to highlight sexual harassment and assault issues in the military. (Corey Dickstein/Stars and Stripes)

Buy Photo
Demonstrators hold signs denouncing sexual harassment and assault in the military outside the Pentagon Monday, Jan. 8, 2018 as Defense Department workers enter the building. The #metoomilitary Stand Down event was organized by the Service Women's Action Network. (Corey Dickstein/Stars and Stripes)

"Where is the incentive to report?" Watts said to those assembled. "Your career may be damaged, you are more likely than not to be retaliated against and then, even if a case is brought against your assailant, less than one in 20 cases will result in conviction and in the other 19 cases, the assailants will walk away unscathed.

"Military men and women are asking themselves, 'Where's our #MeToo reckoning? When do we see military perpetrators of sexual violence held to account?"

Bearing signs like "Denial is not a policy" and "Veterans demand reform," Monday's protesters want the Pentagon to take increased action to stop sexual assault by changing what several called a misogynistic military culture and taking military sexual assault cases out of the hands of commanders — a proposal that military leadership has blocked saying it undermines command authority.

Inside the Pentagon, Army Col. Rob Manning said there was "zero tolerance" for sexual assault or harassment.

"Events like this morning's underscore the importance of the department's continued efforts to eliminate sexual harassment and assault in the military," he said. "The message is that no one should have to tolerate harassment as part of their military service. The Department of Defense continuously works to eliminate sexual harassment and assault from the military, and we encourage servicemembers to report all instances of sexual assault so we can provide support services and hold offenders accountable."

Vocal advocates for victims say more needs to be done. Erin Kirk-Cuomo, a founder of the "Not In My Marine Corps" movement, said the only way to end the scourge is to change the culture and fully integrate men and women on equal footing in all of the services.

"A lot of times the military seems to be the one to push progressive change in our society but let's be honest," she said. "It's considered the biggest boys club in the world, especially the Marine Corps."

Kirk-Cuomo remembers having to carry a crowbar when she walked around base during deployment. Officers and senior enlisted — often married — would hit on her or harass her. Her case was not an anomaly, she said. "This is the stuff that happened all the time," she said. "This was normal in the Marine Corps."

Bowen-Crawford was a young soldier serving a night shift in Nasiriyah during the invasion of Iraq in 2003 when a fellow soldier assaulted her. Senior soldiers around her discouraged her from reporting the assault, saying it would harm her career. She remained silent, she said, knowing her attacker was walking around endangering other women and angry that he could get away with it. 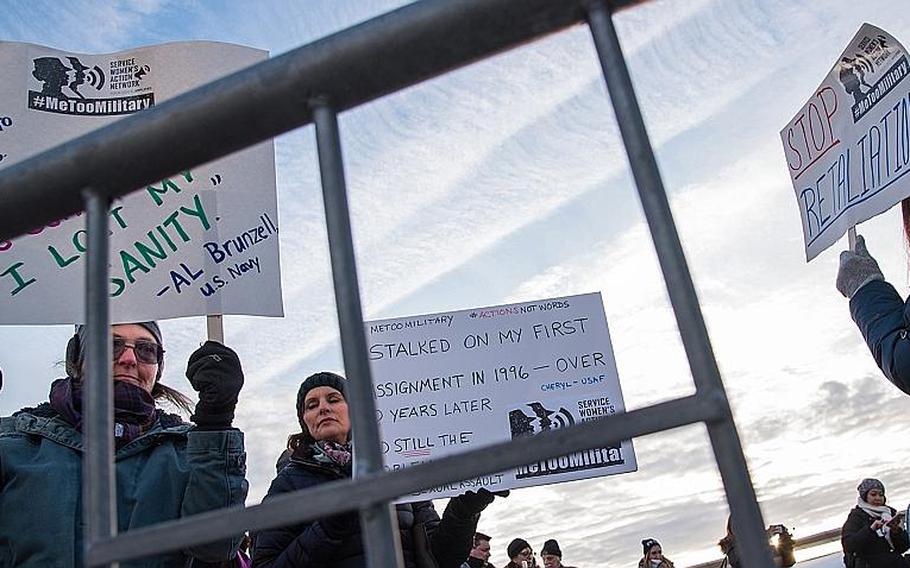 She finished her service and thought she was moving on with her life.

But, in 2011, she came forward and agreed to testify before Congress. She kept speaking out, telling her story on CNN before delayed onset post-traumatic stress disorder forced her to withdraw from public view and seek treatment.

After seeing the #MeToo and TimesUp movements take hold, she said she was compelled to step forward again, joining women and men Monday who declared that military survivors need to seize this momentum.

"Time's up, time's up!" said Monica Medina, an attorney and adviser to former Defense Secretary Leon Panetta, who helped draft protections for women in the military who were assaulted, including ensuring that victims have a lawyer and removing certain cases from the chain of command.

"Sexual assault is finally recognized as the morale-killing scourge that it is," she said. "This is the moment. #MeToo is the movement. And the military needs to use this movement and moment to encourage victims of sexual harassment to come forward."

Medina served in the Army straight out of law school, being posted to the Army general counsel's program at the Pentagon. There, she encountered a powerful senior officer and had to face career retaliation after rebuffing his advances.

It was then that she joined what she called "the #MeToo club." It was not club she wanted to join, she said, or "even one I admitted to until a couple of months ago."

On Monday, she told her story publicly for the first time, calling for change.

"I don’t think we can change it unless more women speak up," she said.

"Eighty percent – 80 percent! – of women in the military report being sexually harassed during their career," Medina said. "Women in service to their nation deserve better."