Where everyone is a winner 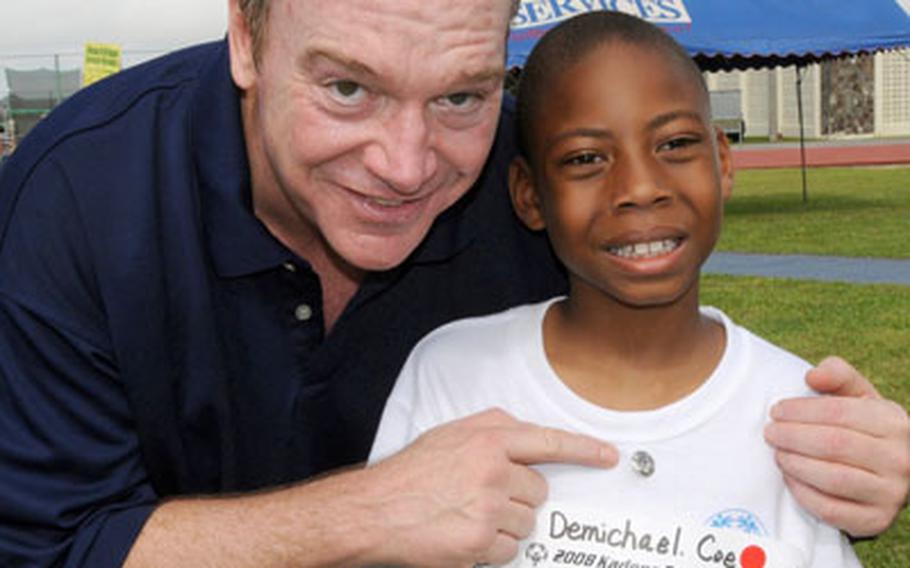 Actor Tom Arnold embraces Demichael Coe, 8, at the Kadena Special Olympics at the air base&#39;s Risner Fitness Center on Saturday. Coe, who has autism, participated in several track events. It was Arnold&#39;s first visit to Okinawa, but he has been involved in Special Olympics for 20 years. (Cindy Fisher / S&S)

KADENA AIR BASE, Okinawa &#8212; It was a day of competition filled with smiles, cheers and hugs as more than 1,200 athletes competed Saturday at the Kadena Special Olympic Games.

Thousands swarmed Kadena&#8217;s Risner Fitness Center to cheer on the participants in events ranging from the wheelchair beanbag drop to floor hockey and track events.

"It&#8217;s absolutely been a tremendous day for the athletes and the volunteers," Kadena Special Olympics spokesman Chip Steitz said.

The Kadena Games started nine years ago with about 100 athletes. Now they represent the Air Force&#8217;s largest community outreach program in the Pacific, Steitz said. Through the Games, "we have made difference" in the lives of so many Okinawan athletes, he said.

The competition also has a big impact on the few American athletes who participate each year.

Denetta Coe, the mother of 8-year-old Demichael Coe, who has autism, said it gives her son "a chance to be involved."

"I&#8217;m proud that he can participate in something he likes and that everyone is a winner," she explained, adding that the Games demonstrate how the athletes&#8217; "disabilities are not limiting."

The Games "bring out the humanity in all of us," Arnold told the athletes, families and volunteers during the opening ceremony.

It was the first Okinawa visit for Arnold, who has been part of Special Olympics for 20 years.

The almost 2,000 American volunteers representing the Army, Navy, Air Force and Marines makes the event "one of a kind," Steitz said.

Airman Eddie Santana, 22, from Puerto Rico and attached to the 18th Equipment Maintenance Squadron, said he saw the event as an opportunity to better himself and give back to the community.

His job was to help hand out medals.

Lance Cpl. Chris Stillions, 20, from Destin, Fla., and a member of Combat Assault Battalion, 3rd Marine Division, is an old hand at volunteering with Special Olympics.

Since his mother is a special-needs teacher, he volunteered many times in the States and said he&#8217;s comfortable with helping those with disabilities.

But, he said, volunteering as a hugger on Okinawa was a little different from stateside because of the language barrier. Still, Stillions and his athlete, Shouhei Ganahah, understood each other enough to share a very unusual arm-waving dance.

She and her athlete, Yukitaka, shared many smiles throughout the day as they participated in wheelchair races and the wheelchair beanbag drop.

She said the athletes appreciated the volunteers, too, something she could see in Yukitaka by &#8220;the smile on his face.&#8221;

Capt. Katie Austin, 25, from Tennessee and assigned to the 18th Medical Group, volunteered to be hugger. Her job was to provide hugs and support to a Japanese athlete and make sure he had the best day possible.

She speaks no Japanese and knew her athlete only by his first name, Tetsuya. But the language barrier didn&#8217;t stop them from communicating.

Austin is ready to volunteer again next year.

See more photos from the Special Olympics at Kadena here.