When the clicking stops before the big blast ... 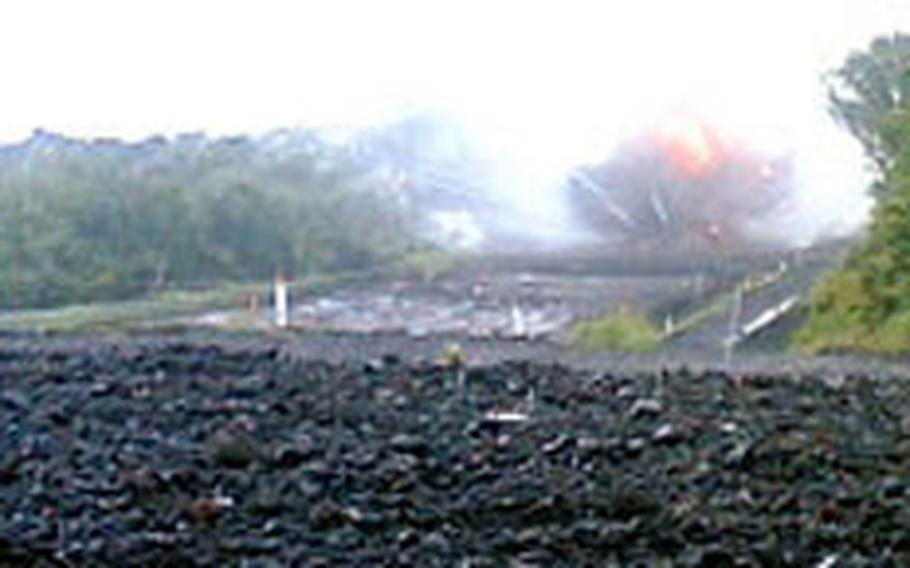 Members of Yokosuka Naval Base&#39;s explosive ordnance disposal detachment prepared this explosion at Camp Fuji, Japan, on Monday. It was much bigger in real life, or so the reporter was told. (Courtesy of Ben Cipperley)

More than 100 pounds of explosives makes a big boom, I was assured.

You know those action-movie sequences with huge fireball explosions? That kind of thrill &#8212; minus Jet Li on a motorcycle &#8212; was the reason I got up at 4 a.m. Monday to tag along with Yokosuka&#8217;s explosive ordnance disposal detachment to photograph demolition training at Camp Fuji.

But my case of pyromania is mild compared to what these guys have.

The shot, in EOD-speak, is the explosion. It involves unloading and packing the explosives, preparing the detonation and observing all of the safety precautions. Monday was going to be a one-shot day.

This meant that I only had one shot at getting the fireball picture.

I was very concerned about setting up a shot of my own. One hundred and twenty-five pounds of C-4 packs a mighty punch, so we had to stay in a covered bunker &#8212; not the ideal place for photography. So I stood on a box and positioned my camera through one of the bunker&#8217;s slits.

The techs warned me that the shock wave was probably going to spray rain on my face. That made it more exciting.

And when I heard &#8220;Fire in the hole!&#8221; I started clicking away madly, believing that the explosion was going to blow me off the box and into next week.

Then the worst happened: The camera stopped clicking. I yelped and looked down at my inoperative machine.

I missed the whole thing. I hadn&#8217;t even seen it with my eyes. Then the laughter began.

Two of the EOD guys captured some great footage of the explosion on their cell phones, plus audio of my yelp and the laughter that followed. I sheepishly asked if I could borrow the images. The laughter continued as they explained that it takes a while between pressing the button and the actual explosion. They said they&#8217;d do it over if they could, but alas, the explosion had obliterated everything.

I should probably stick to writing, they said.

And yes, I got water on my face. Maybe it will help wash off the egg. Shot? Bartender, I&#8217;ll take another!