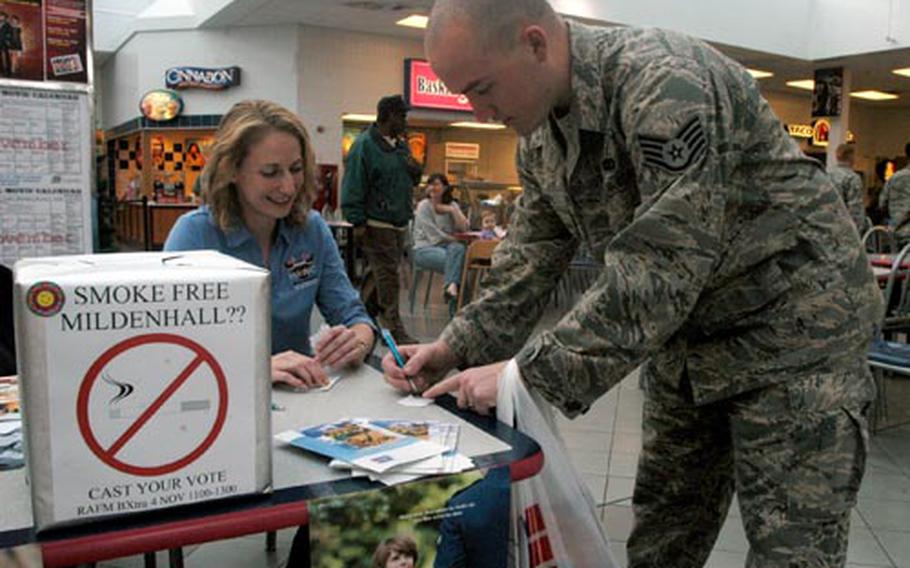 Staff Sgt. William White casts his vote in favor of a base-wide smoking ban Tuesday with Kelly Livett, information manager for the Health and Wellness Center at the base. (Charlie Reed / S&S)

The polls were mixed Tuesday but the "electorate" ultimately voted in favor of making RAFs Mildenhall and Lakenheath smoke-free.

A million miles from the big race playing out Tuesday in the States, the lunchtime poll at the base exchanges asked people if they supported such a sweeping ban.

Of the 622 people polled, 64.6 percent voted in favor of making RAFs Mildenhall and Lakenheath smoke-free. The results will be forwarded to the bases&#8217; wing commanders, who have the power to initiate such an order, said Maj. Cathy Snowball, flight commander for the wellness centers, which fall under the auspices of the 48th Medical Group at Lakenheath.

"Granted, it&#8217;s a disgusting habit," said Staff Sgt. Walter Schmitt, with the 727th Air Mobility Squadron at Mildenhall, who voted against a basewide ban. "It&#8217;s still our right to smoke. &#8230; We have enough rights taken away in the military."

Staff Sgt. William White, with the 100th Security Forces Squadron at Mildenhall, said he voted for the ban because: "I hate the way it smells. &#8230; And I think we could get a lot more done if everyone wasn&#8217;t always taking smoke breaks. It would probably make my wife mad because she&#8217;s a smoker. But she&#8217;d have to get over it just like everybody else would."

Smokers who favored the ban said it could help them and others quit, while nonsmokers cited preservation of personal liberties as a reason to not initiate the ban.

Though she favors a basewide tobacco ban and Tuesday&#8217;s vote seems to show support for the issue, Snowball doesn&#8217;t hold out much hope that such a move would happen.

Still, individual commanders have been cracking down on tobacco use in the workplace. Members of the 48th Security Forces Squadron are no longer allowed to smoke, dip or chew while on duty, and the 48th Medical Group will begin prohibiting tobacco use &#8212; by servicemembers, civilians and visitors &#8212; on all hospital grounds starting Nov. 20.

A spokesman for U.S. Air Forces in Europe said Tuesday that no other bases in the command had conducted such a poll or were pursuing basewide smoking bans.

Snowball and her staff are working to lower local tobacco-use rates to about 12 percent by 2010 as part of a national Centers for Disease Control and Prevention benchmark. The national average sits at about 30 percent, with Lakenheath and Mildenhall at about 30 percent and 27 percent, respectively.

Despite the slim chances for a smoke-free Lakenheath or Mildenhall, "we hope [the results of the vote] prove a point in the end," she said.