When home is as scary as war 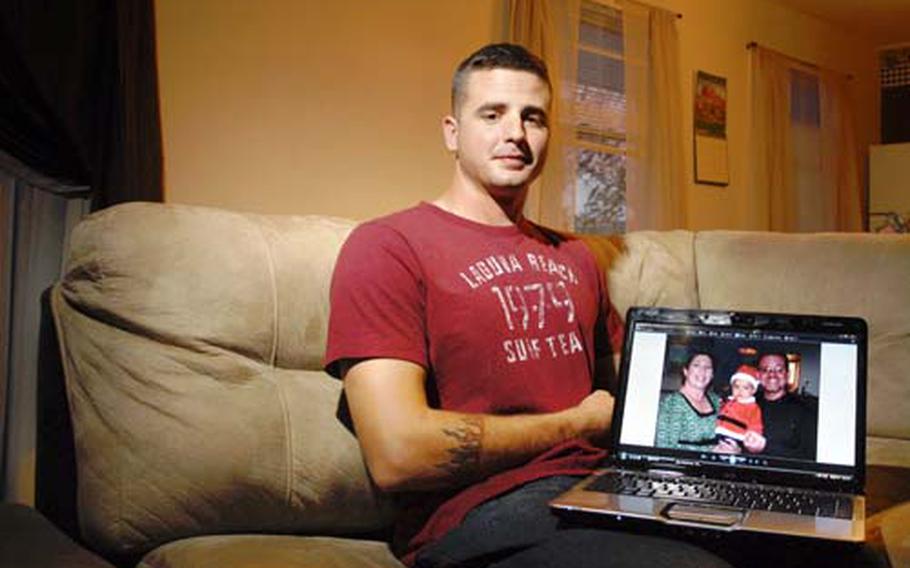 Pfc. Philip Vance shows off a photo of son Quenton and his parents for a portrait in his apartment Oct. 30th, 2008 near Watertown, NY. Vance, a medic that was attached to Company B, 2nd Battalion, 22nd Infantry Regiment, 1st Brigade, 10th Mountain Division, recently returned home from his deployment to Kirkuk, Iraq. Just before deploying, Vance&#39;s wife attempted suicide and was saved by Vance. With sole custody of Quenton, Vance plans on raising him as a single parent in the near future. (Ben Bloker / S&S)

Happy families stay at the Fort Drum Inn. Unhappy ones do, too. Pfc. Phil Vance&rsquo;s wife almost took her own life in one of the rooms just days after he got orders to deploy. Their baby boy was asleep on the bed.

They&rsquo;d been arguing, as they often did. She wanted to drive to Rhode Island for a family visit. He had agreed until he saw how far it was. The discord escalated. She threw the laptop against the wall, he said.

She went into the bathroom and came out with a scalpel in her hand, one he said she used for cosmetics, and asked: "Is this what you want?"

Then she drew the scalpel across her throat.

She cut through her carotid artery and jugular vein and would have bled to death if Vance had chosen another military occupation.

But the 24-year-old former construction worker from Arizona had recently become a medic.

As she collapsed, he pressed a towel to her throat and tried to stop the bleeding.

"I straddled her and put all my weight on her esophagus," he said.

"I was surprised the cops didn&rsquo;t shoot me," he said.

She lived. He started divorce proceedings. He wanted custody of Quenton, the baby, and she didn&rsquo;t fight that. And although his command told him he didn&rsquo;t have to deploy, he went.

"I thought it was the right thing to do," he said.

He called his father and stepmother, despite having a strained relationship, to ask if they would take the baby.

In their 40s, their children finally grown and gone, they were planning to travel and have some fun.

"We were looking forward to that. We certainly didn&rsquo;t see this coming," said Jay Vance, a former minister who lives in Columbia, Mo. "But when things happen, you make adjustments."

So does the heart. The elder Vances love Quenton, who will turn 3 in February. They would be "perfectly content" to keep him, Jay said.

"I&rsquo;m not going to get out. No way. This is a defining thing in my life," he said. "I guess I&rsquo;m a bit of an idealist. Somebody has to do what we&rsquo;re doing."

How will he make it all work?

A few days after his return from Iraq, he said his parents would soon be bringing Quenton to Watertown.

"I&rsquo;m sure my mom will stay a little while," he said. "But after that, it will just be me and him."

"It probably scares me more than combat or bombs."

He and his father had talked about it while Phil was in Iraq; the fact that Phil says he wants to step up to his responsibilities is good, Jay said. But he worries.

"Phil expresses he wants to be a father to his son. &hellip; But realistically in his situation that remains to be seen," his father said. "Our position is that if Phil says that&rsquo;s what he wants to do, we can only exert so much pressure. Mentally, we&rsquo;re prepared as much as we can be for one way or the other. It&rsquo;s one of those situations fraught with danger one way or another."

Phil says he knows how difficult it will be. One irony is that like his ex-wife has let her baby go, Phil&rsquo;s mother had also left her three children for his father to raise.

"In a lot of ways she was a very good mother," he said. "She can see him whenever she wants. &hellip; She has to stay within the county."

Phil said that day at the Fort Drum Inn was the most disturbing thing he has ever been through.

"Imagine a room like this," he said, sitting on the new leather sofa his deployment money bought, "covered in blood."

"I couldn&rsquo;t sleep for, like, a week. I&rsquo;m still dealing with it to some extent."

His combat deployment &mdash; including being hit by a roadside bomb and caring for injured soldiers &mdash; was nothing compared to that trauma. In fact, he said, his deployment probably saved him.

"It definitely distracted me," he said. "It was for the best that I went. If I&rsquo;d stayed here, I&rsquo;d probably be in very bad shape."