When grilling, safety comes before burgers 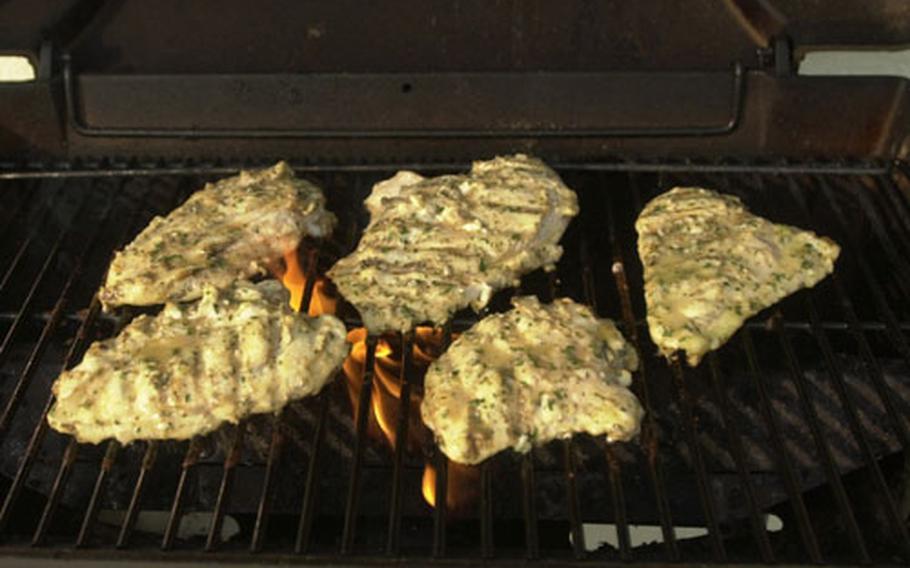 While grilling can be relaxing and provide a tasty meal, there are safety tips that should be followed. (Fred Zimmerman / S&S)

CAMP FOSTER, Okinawa &#8212; With spring officially here, the sweet hickory aroma of barbecues can be smelled throughout housing areas.

While grilling up dinner with some friends can be a nice way to relax on the weekends, some simple safety rules should be followed to ensure everyone has a good time, according to Mark Sileikis, assistant fire chief for fire prevention and education.

With gas grills, he said, one of the first steps should be to apply a soapy water on the connections and hoses. Any leaks will make the solution bubble up and reveal the problem, he said.

Checking the burners&#8217; condition also is important, Sileikis said. The burner should provide an even flame throughout. If there are large holes in the burner flame, the part should be replaced. He said most burners last just one or two seasons, depending on use.

Some of the most important parts to check, Sileikis said, are the venturi tubes, which deliver the gas to the burner.

&#8220;Spiders like to get in there and make home and lay their egg sacs,&#8221; he said. If the tubes are blocked and no air is getting mixed with the gas, then the flame is nothing but propane.

Another threat to the venturi tubes and main body of the grill is rust, Sileikis added. He said the tubes can rust and fall off, causing a &#8220;blow torch&#8221; effect. Rust on other areas of grills also can pose a threat. Sileikis said owners of charcoal grills should be aware of corrosion since hot coals could fall onto their feet if the grill collapses.

Another thing to remember, whatever kind of grill, is the danger of the carbon monoxide that burning charcoal and gas emits, Sileikis said.

He added that grills never should be used indoors or in confined spaces due to the dangers of carbon monoxide.

Base housing residents each receive a brochure about grill use from the Kadena Housing Office when assigned quarters, said Charles Steitz, 18th Wing spokesman. Rules concerning grills in housing also are covered during new-arrival briefings, he added. Residents are told to keep grills away from building overhangs and at a reasonable distance from all combustible structures.

Sileikis recommends keeping the grill anywhere from 10 to 15 feet from buildings.

According to the National Fire Protection Association, grills caused 1,500 structure and 4,200 outdoor fires in the United States in 1999, resulting in a combined property loss of $29.8 million.