When Chinook touched down at firebase in Afghanistan, so did rockets 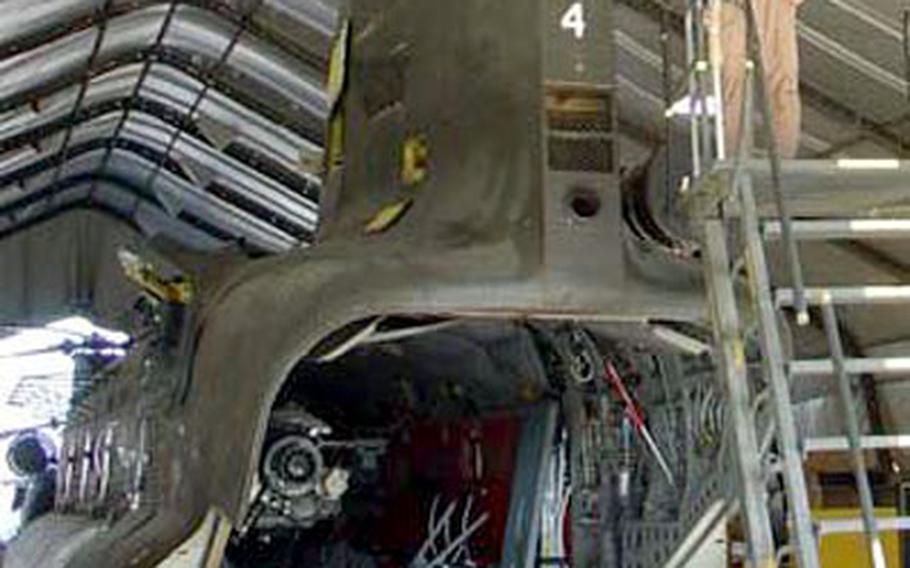 In his six years of flying Chinooks, Chief Warrant Officer 2 Justin Howe had never been through a landing quite like this.

With the engines still running, he glanced through his windshield and saw a flash in the distance. The boom followed moments later.

Howe and his crew didn&#8217;t yet know that insurgents had fired four rockets at the firebase. One of them narrowly missed his Chinook but struck squarely in the midst of the ground crew preparing to unload it.

At first, Howe didn&#8217;t realize how bad the blast was. For a moment he thought the flight engineers, Spc. Ryan Winter and Sgt. Jorge Goicochea, were banging around cargo in the back. But the noise, he said, seemed &#8220;five times louder&#8221; than usual.

But Howe and his co-pilot, 1st Lt. Matthew Gettings, quickly figured out they were being attacked. At first, they hoped to take off again &#8212; until the flight engineers told him the rear of the aircraft had been riddled with shrapnel. One piece had pierced the tank holding transmission fluid, leaving it in a sticky puddle on the ground.

The rocket had struck just aft of the Chinook, but none of the shrapnel struck the passengers or crew. The engineers and the gunner, Pfc. Evan Templeton, hustled the riders out the right front door to safety.

After notifying his chain of command and checking on his passengers, Howe ran back to the landing zone to see if he could help.

Medics had loaded the dead and injured into Humvees and ferried them to the aid station. He helped carry some oxygen tanks but soon realized the medics had enough help.

That afternoon, Howe said, his commander arrived to personally fly the Big Windy crew and passengers (including five airmen from the 386th Expeditionary Group, six soldiers, and one civilian contractor) to their destinations.

But he said the flying conditions are much harder this time. The high altitude, mountain peaks and bad weather make every flight in Afghanistan treacherous. On April 6, his Chinook and another one were flying together when a sandstorm suddenly hit. Howe flew out of it safely but the other one crashed, killing all 18 passengers and crew.