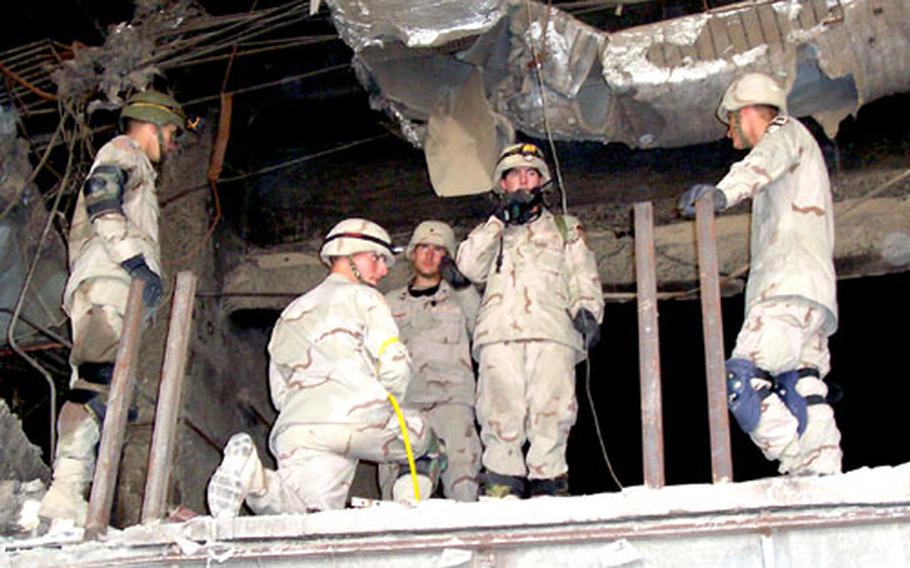 The 458th Engineer Battalion provides a service unique not only to the U.S. Army, but to Iraq as well.

The battalion&#8217;s Heavy Rescue One unit is the only Army unit qualified to rescue people trapped in collapsed buildings, such as those hit by car bombs.

&#8220;We can find people who are alive and get them first aid,&#8221; said Sgt. Frank DiFilippo, part of the initial group of heavy rescue officers with the 458th.

About 85 of the battalion&#8217;s more than 500 soldiers are trained as part of the unit, but Sgt. Joseph Taylor, the Army Reserve unit&#8217;s deputy chief, said it can call on the entire battalion if needed.

When called to an incident, the unit&#8217;s six officers will fly or drive to the site as soon as possible. They will determine what equipment and personnel are necessary to start the rescue efforts. Once everything arrives, they begin working.

Though it was created to support the 1st Cavalry Division, the unit will respond to civilian incidents as well. The Iraqi government does not have its own heavy rescue unit.

The heavy rescue capability was created from scratch in December 2003, said Roth.

Roth and the five other unit officers decided how the unit would create a heavy rescue capability while preparing to deploy from Fort McCoy, Wisc. These initial heavy rescue officers, Roth said, all have civilian careers related to this kind of work.

Roth, who has been a civilian firefighter for more than a decade, worked with New York City firefighters after the attacks on the World Trade Center on Sept. 11, 2001. Another officer, Staff Sgt. Brian Fuller, was at the Pentagon that day.

Taylor is a firefighter in the Norfolk, Va., area, and DiFilippo is a hazardous-material technician.

Once the officers decided what equipment and training was needed, they started looking for volunteers in the battalion. Many came forward with civilian experience that fit the unit&#8217;s needs.

&#8220;The reserve component brings these skills,&#8221; said Taylor. These volunteers gave the unit a core base of skilled personnel.

Training began at Fort McCoy, the unit&#8217;s mobilization station. &#8220;We figured the best thing to do was to give everyone a basic overview of what these operations were like, expose them to it, but not get too technical,&#8221; said Taylor.

When the unit arrived in Baghdad earlier this year, members were able to train on buildings with real battle damage. Three of the training sessions were held at the former Republican Guard palace in the International Zone.

In the next month, the unit will take part in its largest training event. It will be in another International Zone building, working in conjunction with fire and medical personnel. And because the unit&#8217;s officers didn&#8217;t set up the training, they don&#8217;t know what to expect.

Each training session, Taylor said, gives the unit&#8217;s soldiers more confidence and experience if called to a real building collapse.