When at sea, Japan-based sailors do as the Japanese 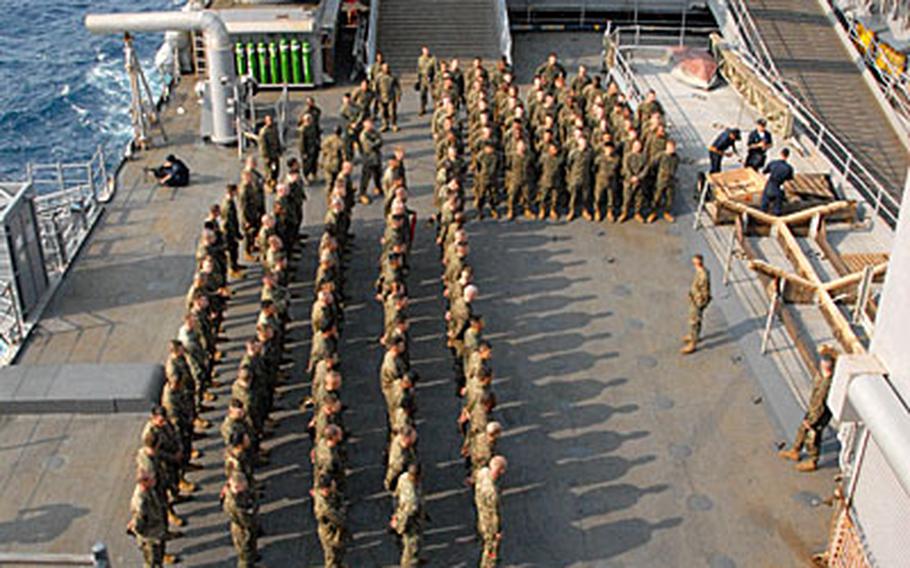 Marines with Marine Wing Support Squadron 172 stand in formation on USS Harpers Ferry on March 10, their first day onboard for a mission last week. The unit&#39;s sergeant major and commanding officer gave the Marines a talk about the upcoming mission and how to behave on the ship. (Megan McCloskey / S&S)

They don&#8217;t eat with chopsticks or bow when entering a room, but some USS Harpers Ferry sailors say they take a little bit of Japan with them when they head out to sea.

Petty Officer 3rd Class Jennifer Rogozinski, who works in the engine room but is currently on galley duty, said sometimes at sea she&#8217;ll forget where she is.

Some sailors who have Japanese girlfriends back at port will hit Adams up for help with sending out an e-mail to their significant other or translating something she wrote.

Much of the Japanese way of life incorporated onboard is just automatic from living in Japan for a while, said Hightower, whose wife is Japanese.