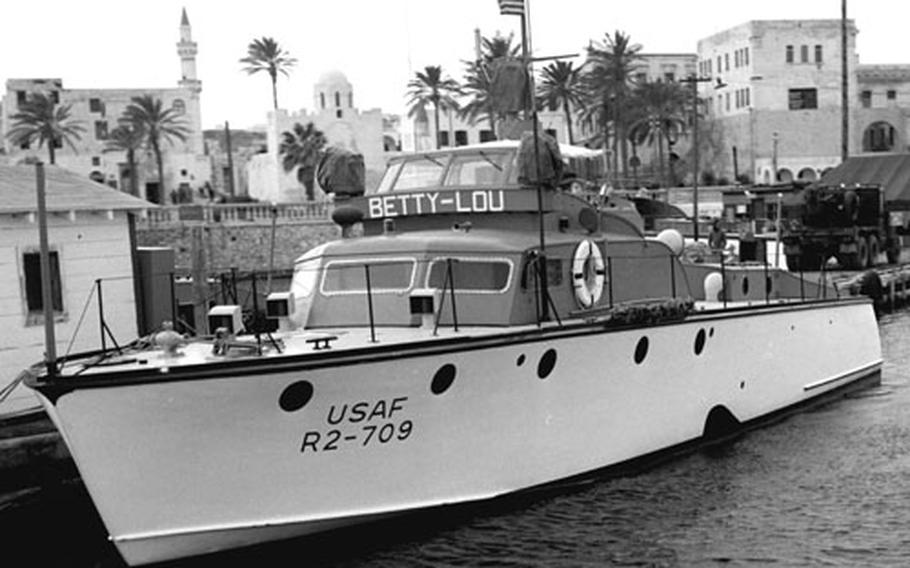 TRIPOLI, Libya, Feb. 15 &mdash; Instead of seeing the world from a cockpit, a group of Yank airmen stationed here have found themselves gazing through a porthole. They've been assigned duty as sailors.

Members of the 7th Crash Rescue Boat Flight, the seagoing flyboys have such titles as airman first class-seaman, airman second class-radio operator-seaman and staff sergeant-boat master. The men are stationed at the foot of this ancient city overlooking the Mediterranean, and they run four 63-foot converted PT boats that provide marine rescue service in the event of an air crash at sea.

More than half of the 38 airmen comprising the 7th Flight have had previous experience swabbing decks. Many served on torpedo boats in World War II and signed up with the Air Force specifically to get crash boat duty. Others in the 7th Flight are somewhat chagrined at having wound up as seagoing airmen.

A/2C Alvin R. Penry, a radio operator-seaman, was inclined to be philosophical about the whole thing: "It's no shock to me," he said. "Anything can happen in the Air Force."

A/1C Engineer Earle H. Hammond, a photographer in the Air Force before being assigned to the crash boats, said he likes his new duty fine &mdash; just as much as photography. Asked how he happened to wind up in his present field, Hammond said that while he was stationed in the States working as a photographer, another airman named Hammond volunteered for crash boat duty. "They took me by mistake," Hammond said, "but I still like it fine."

One of those who did know he was going into crash boat service is S Sgt Boatmaster Edward T. Beck, a veteran of 10 years in the Navy. Beck served on crash boats in the Philippines during World War II and participated in 13 major engagements.

Another Navy veteran who was an engineer on a PT boat during the invasion of Guadalcanal in World War II is Airman Morris L. Dove. "There's no duty like that on small boats," Dove says. "The Navy couldn't guarantee I'd get small boats, so I joined the Air Force."

The 7th Flight's main job is to provide round-the-clock sea rescue coverage for aircraft landing and taking off over the Mediterranean from Wheelus Field, five miles down the coast. In a normal 24-hour period, takeoffs from the runways at Wheelus and the adjacent air-to-air jet gunnery range are said to average one every three minutes.. Traffic like this keeps the crash boat crews on the alert day and night.

Skipper of the 7th Flight is Capt Richard W. Hughes, who took the helm in December. A confessed landlubber, Hughes said all he knows about boats is that he likes 'em. This is evidenced by his casual conversation in the dockside office outfitted like a ship's cabin.

Pointing out the window to one of the boats rocking in the waves, Hughes said: "That's Old 1056. Nobody knows where she came from. It just seems she has always been here. She was a U.S. torpedo boat during the war, but she was sunk and later raised by the Italians. When we moved into Wheelus in 1944, Old 1056 was waiting for us and she's been here since.

"Right now, we're decommissioning her," Hughes continued. "We've applied to Wright Field and the Air Materiel Comd to issue us another boat in her place. The boys will hate to see her go. They call her 'The Sponge" &mdash; she's been sunk so often but refuses to stay down."

Hughes admits he's just getting his feet wet in his new job, but he's enthusiastic about the assignment. "We're having some trouble getting the TO filled out," he said, "but we expect to be shipshape shortly "

Operationally, the 7th Flight is independent. The crash boats work in conjunction with the 58th Air Rescue Sq at Wheelus on emergencies, but otherwise the outfits have no connection. The 7th Flight is attached to Wheelus for support.

Hughes explained that normally the Navy would provide crash boat service to a coastal air base, but since there were no Navy detachments in the area, the Air Force has to provide its own. He added that the 7th Flight is just one of many similar units the Air Force maintains around the world, the largest being at West Palm Beach, Fla.

The 7th Flight received three new crash boats in the last six months of 1953. Originally, the four boats, including "The Sponge," were named Ace, King, Queen and Jack. However, they are in the process of being renamed now, and the Ace crew just hit an all-time low by rechristening their craft the Betty Lou. Hughes hopes the other crews might go native in their selection and come up with a Mohammed Ben Ali or somesuch. The Arab dockhands are facing towards Mecca on this selection, too.

Sleek craft equipped with 1,000-hp Hall-Scott engines, the crash boats have a top speed of about 40 knots. Cruising at about 25 knots, they are capable of staying at sea for approximately 30 hours. The boats carry enough food for the crew of eight and two survivors for a period this long. Stripped of the armament they carried as PT boats, the craft now contain 10 cots and are equipped with a complete dispensary.

In the past year, the 7th Flight has participated in the search for survivors of a C119 that went down near Malta and a British airliner that crashed at sea 260 miles northeast of Tripoli.

The crash boats also picked up the crew of a B26 when they bailed out after their plane was shot down while towing a target over the gunnery range. A month ago, the 7th Flight rescued a jet pilot whose plane crashed in the sea on approaching Wheelus.