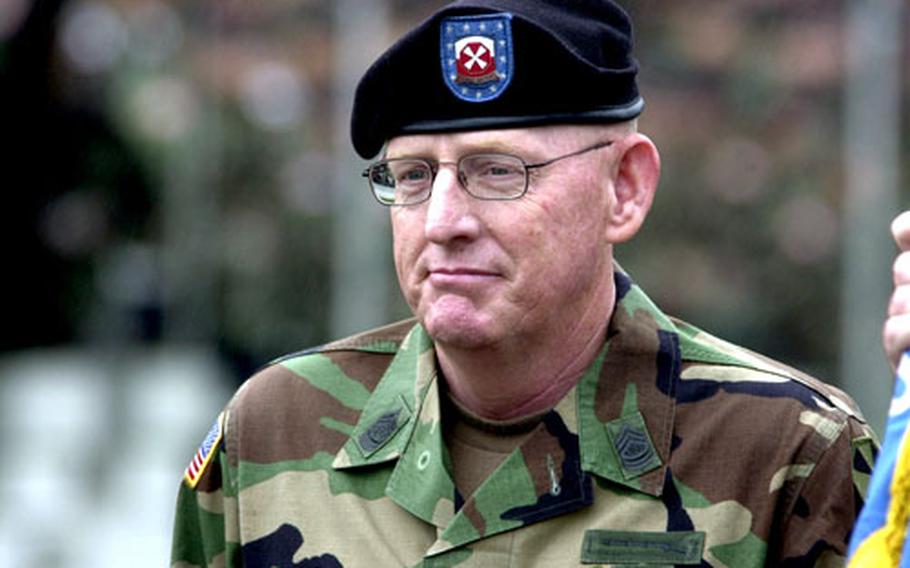 Command Sgt. Maj. Barry Wheeler, senior enlisted U.S. leader in South Korea, addressed various topics during his first appearance on “From the Top,” a live monthly radio program in which the community is invited to call or e-mail questions about life on the peninsula. (T.D. Flack / S&S)

Command Sgt. Maj. Barry Wheeler addressed those topics, and others, during his first appearance on &#8220;From the Top,&#8221; a live monthly radio program in which the community is invited to call or e-mail questions about life on the peninsula.

Witt said improved shuttle bus service is right around the corner, but he provided few details.

&#8220;I know everyone out there in Area II is wondering about the buses,&#8221; he said, referring to the flood of e-mail and phone calls he&#8217;s received since the bus shuttle service was trimmed earlier this year due to funding.

One caller said that as a noncommissioned officer, it&#8217;s tough to see young family members driving around the post when the soldiers aren&#8217;t allowed to own cars.

The real issue, Wheeler said, was drinking and driving incidents and young soldiers injuring or killing themselves or others in accidents.

Wheeler, who joined the Army in 1973 and who served twice previously in South Korea, said the Army hasn&#8217;t changed that much since he first donned the uniform.

Leaders who succeed in the service worry about what they can control, Wheeler said.

&#8220;They focus down on their subordinate instead of up on what they can&#8217;t control, whether that be the (vehicle) policy or what law Congress is gonna pass next.

Wheeler also answered a call from a soldier concerned about how quickly Camp Casey would close as USFK transforms its troop presence in South Korea. Thousands of U.S. troops are moving south to the Pyongtaek area, near Camp Humphreys and Osan Air Base, under an Amended Land Partnership Plan.

A few questions brought up the issue of funding for U.S. troops on the Korean Peninsula.

&#8220;It&#8217;s understandable why we may not see as much (funding) this direction as going in another direction, so we all have to be understanding of that fact, and accept it, and do the best with what we have.&#8221;

Wheeler also took the time to thank the troops for the work they do in South Korea.

&#8220;You know, when I get a little unmotivated I just go out and talk to some troops and they always lift my spirit,&#8221; Wheeler said. &#8220;What they do every day here in Korea is very important to our nation, important to the nation of Korea. I hope they take pride in that fact.&#8221;

He also said he would be back on air next month, fielding questions.