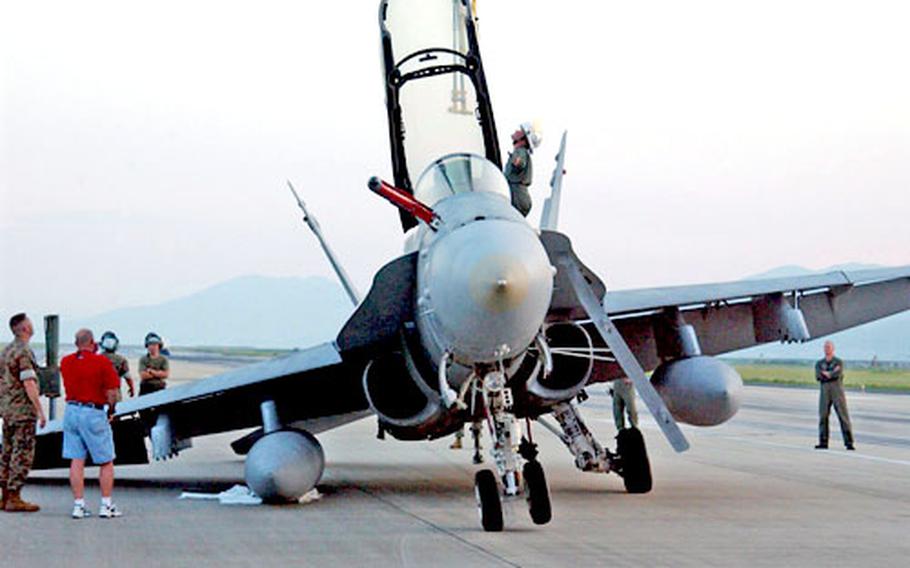 &#8220;The jet&#8217;s right rear landing wheel did not deploy and resulted in an arrested landing,&#8221; base officials stated in a release Monday.

&#8220;This was an isolated incident specific to this type of aircraft that resulted only in minor damage to an empty external fuel tank upon completion of the landing,&#8221; the release stated. &#8220;At no time during this landing was the local community in any danger. We regret any anxiety this may have caused the local community.&#8221;

The malfunction caused the $28 million Marine All&#8211;Weather Fighter Attack Squadron 225 aircraft to land using an arresting cable spread across the runway at about 5 p.m. The plane landed safely; no injuries were reported.

Only minor damage was done to the right external fuel tank, the release stated, adding that the tank is replaceable and not considered part of the aircraft body.

The pilots were alerted to the malfunction about 15 minutes before touch-down. They notified flight line personnel; a dozen rescue and firefighting Marines arrived on two P-19 fire trucks and one rescue vehicle in preparation for the landing.

Once the pilots were safely out of the aircraft, maintenance crews lifted the plane with a crane and manually opened the landing gear. The aircraft later was towed back to the squadron&#8217;s hangar.

The mechanism is being replaced and proper safety precautions taken; once completed, the aircraft will return to flight, according to the release.