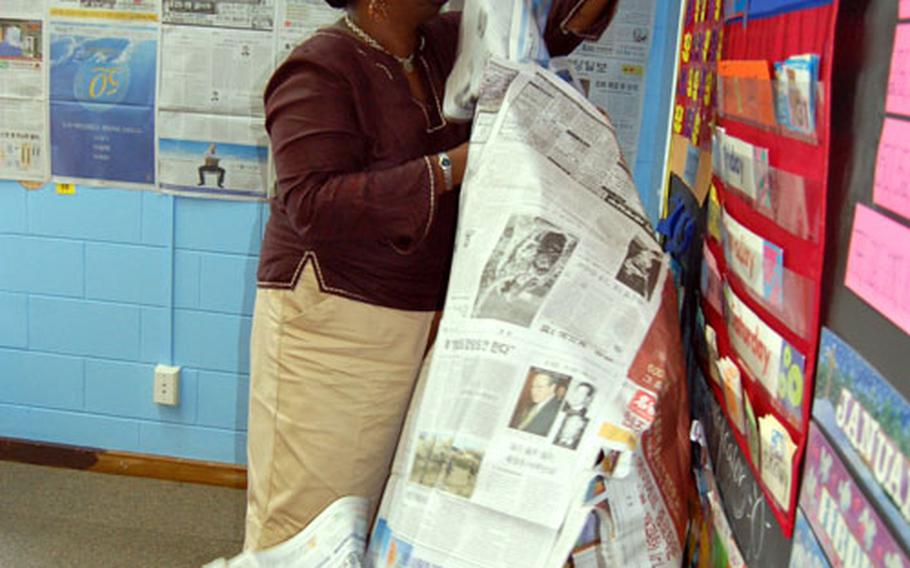 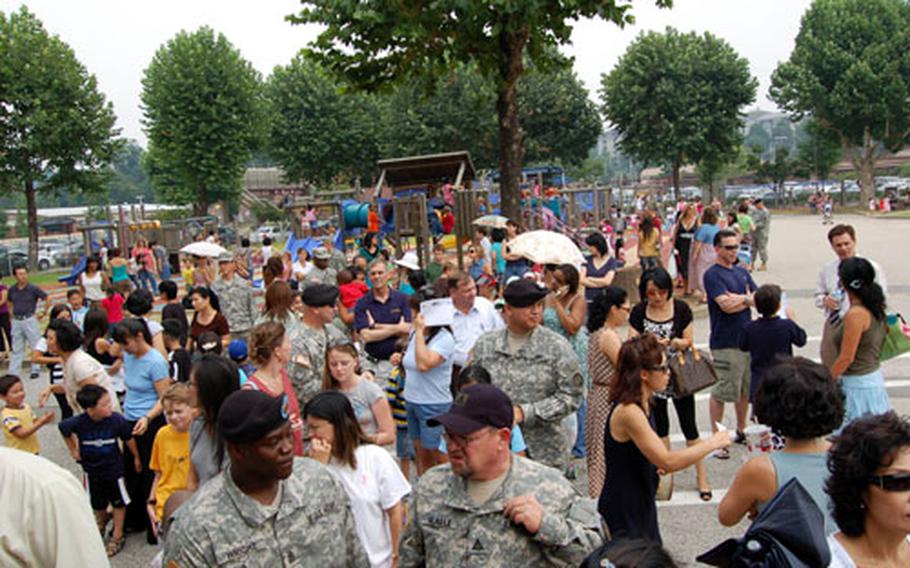 Students and parents gather in front of the Seoul American Elementary School gym to find out which classrooms the children will be assigned to for when school begins Monday. (Jimmy Norris / S&S)

The dog days of summer are over for scores of school-age kids across the Pacific.

The first bell of the 2007-08 school year rings bright and early Monday, when more than 23,000 students in kindergarten through grade 12 are expected to report to Department of Defense Dependents Schools-Pacific and Domestic Dependent Elementary and Secondary Schools-Guam.

No significant academic changes are in store, though the military school system will continue its push to increase foreign language proficiency.

&#8220;Foreign language in the elementary schools is expanding significantly, and the same with Mandarin Chinese&#8221; at the secondary level, said Dr. Nancy Bresell, now in her 10th year at the helm of DODDS-Pacific and DDESS-Guam.

For the first time, students in their second or fourth year of foreign language study will take a year-end proficiency exam, Bresell said.

&#8220;We will then probably address curriculum and proficiency expectations after this first run with the exam,&#8221; she said.

This school year also marks the first that all high school advanced-placement courses will have endorsement from the College Board. AP teachers last spring submitted their syllabi to the College Board &#8212; a not-for-profit membership association of more than 5,200 schools, colleges, universities and other educational organizations. With the endorsement, Bresell said, students can be assured that their AP coursework is commensurate with college studies.

&#8220;That might scare some kids away from taking the course, but it is truly going to be what it should be and that is college-level work,&#8221; she said.

Looking ahead at the fiscal year starting Oct. 1, Bresell said all indications are that the budget will be better than the current one. Any staffing cuts would be based on Department of Defense Education Activity criteria and declining enrollment, she said.

Enrollment throughout the Pacific appears to be holding steady with previous years, school officials said. This year&#8217;s student body is projected to be 23,793.

Budget cuts last year forced some DODDS-Pacific schools to suspend field trips. Bresell said this year &#8220;it is our intent, to the extent circumstances will allow,&#8221; to support trips. She noted they must be &#8220;curriculum-based and in line with our standards.&#8221;

Staff members will be especially focused this year on helping ease the transition for students and families as they move between schools and maintaining close contact with families of deployed servicemembers, Bresell said.

&#8220;We want our parents who are going to be deployed or who are deployed this year to know that our schools will continue to provide continuity and consistency with your children,&#8221; she said.

The student-to-student welcoming committee for new high schoolers will be expanded to all high schools this year, Bresell noted, with training to be conducted in October.

Teams of at least two students and a teacher sponsor new arrivals, helping them learn the layout of the school, meet others and transition into the community.

There will be a slew of fresh faces at the head of the class this year as DODDS-Pacific/DDESS- Guam welcomes 228 new teachers. Most are coming from DODDS-Europe, Bresell said, noting that 114 of the new staffers are transfers, 41 come from the United States and 73 are local hires.

Highlights and changes for the 2007-08 DODDS school year