What's in a name? New ones don't help Itaewon bars off USFK blacklist 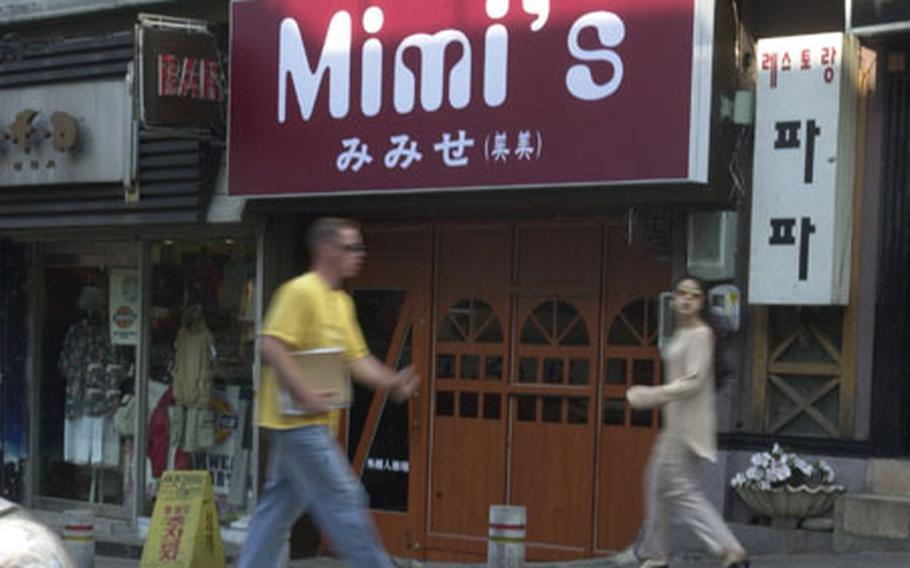 Some Itaewon bars put off limits to soldiers by U.S. Forces Korea have changed their names and facades, but an Army spokesman said they will remain banned until they reform. Mimi&#39;s was formerly called Spanki&#39;s Bar and is still off limits. (Jeremy Kirk / S&S)

YONGSAN GARRISON, South Korea &#8212; A few Itaewon bars &#8212; banned for selling sex &#8212; have changed their names and facades to elude blacklisting by the base.

U.S. Forces Korea handed commanders an updated list of bars that are still banned, and an Army official said Wednesday that even under new names, they&#8217;ll remain off-limits until they reform.

&#8220;They may change the name, but it doesn&#8217;t change their status,&#8221; said Lt. Col. Steve Boylan, 8th Army spokesman. &#8220;We continue monitoring areas to keep our soldiers informed when places do try to get around the system. We continually update the list as needed when we find this type of occurrence happening.&#8221;

The U.S. military came under fire last year when its servicemembers were accused of supporting an illegal sex trade industry that included trafficking of women. USFK&#8217;s inspector general found that U.S. courtesy patrols &#8212; often uniformed soldiers who enter bars &#8212; did not support prostitution or trafficking.

In March, the U.S. military distributed a list of prohibited bars, many of which were cited for selling sex. Others were banned for allowing underage drinking and for force-protection concerns.

One hotel and 24 bars remain off limits in Itaewon, according to information published by USFK. A handful have changed their names: Dragon Club to Eve Club, Dallas Club to Hypnotic Club, Spanki Bar to Mimi&#8217;s, and Cocktail Bar to Tiffany&#8217;s.

The Hypnotic Club, Boylan said, put up a sign attempting to draw business, but misspelled it &#8220;On Ltmits.&#8221;

If it is placed off-limits, a club can reapply for access, Boylan said. Each of the military&#8217;s five administrative areas in South Korea has an Armed Forces Disciplinary Control Board that reviews off-base establishments.

&#8220;The specific purpose of the bar fine was to engage in acts of prostitution,&#8221; Lt. Col. Roger Bruce, 51st Fighter Wing judge advocate, wrote in the base newspaper.

If caught soliciting prostitution, soldiers could face punishment under the Uniform Code of Military Justice. However, no 8th Army soldiers have been court-martialed for paying a prostitute, Boylan said.

Some may have been punished through nonjudicial punishment, Boylan said, but statistics are unavailable. The number of soldiers in that category likely is low, he said.

At Kunsan Air Base, the owner of The Boss requested no servicemembers frequent it, so it is off-limits. About 18 bars catering to servicemembers in the Uijongbu area have been deemed acceptable and will soon be inspected for fire safety, said Bill Kapaku, civilian executive assistant to the Camp Red Cloud garrison commander.

In Area III, three bars &#8212; Top Hat, Zeus and Seven Club &#8212; were off-limits for about a month but have now come into compliance, said Susan Barkley, public affairs officer.

&#8220;They went to great lengths to ensure they could come into compliance,&#8221; Barkley said.

In Area IV, the Odyssey Club outside Camp Henry was placed off-limits March 20 by the AFDCB because of force-protection concern with parking at the establishment, said Kevin Jackson, public affairs officer.