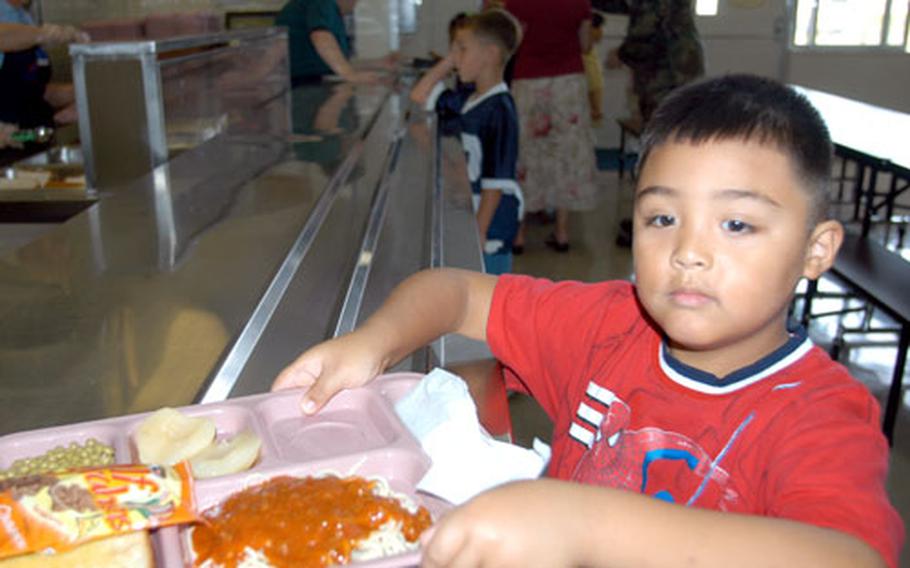 First-grader Phil Araneta grabs his lunch tray and finds a seat at Cummings Elementary School at Misawa Air Base, Japan, last year. Spaghetti is still in, but peas are off the menu at DODDS schools. (Jennifer H. Svan / S&S)

As thousands of children reported to Department of Defense Dependents Schools last week, they found a few changes in the lunch line.

The Army and Air Force Exchange Service, which provides about 24,000 meals a day at 110 schools around the globe, is expanding the menu for the main line program and altering the options for those choosing a la carte.

&#8220;We want to improve the menu for the students, while adding items that are more nutritious,&#8221; said Maj. Sarah Flash, staff dietitian at the agency&#8217;s headquarters in Texas.

The agency has been surveying pupils and parents about likes and dislikes and monitoring stateside school districts, Flash said.

Survey results found kids wanted items such as macaroni and cheese, chicken quesadillas and noodles. But they&#8217;re not so fond of peas, which will be phased out.

Many other changes are based on new nutrition guidelines that many stateside schools are adopting. So chicken poppers will be replaced by lower fat grilled chicken pieces.

Flash said school menus vary depending on available facilities, but the basic menu is based on a six-week rotation of items, so children won&#8217;t see the same food options very often.

It&#8217;s the older students who will probably notice the changes the most. Those who choose the a la carte line will find some popular items, such as french fries, gone. Pizza and corn dogs will still be there, but will be made with healthier ingredients, Flash said, and portion sizes generally will be smaller.

High-sugar fruit drinks such as Snapple, Tropicana Twists and Capri Sun won&#8217;t be around. Flash said fruit drinks must contain at least 50 percent fruit juice to make the cut.

Those improvements make the menu better, but still not quite satisfactory for some parents who said they&#8217;d like to see more fresh items offered.

Others aren&#8217;t sure how much healthier the new menu really is but said they like how the changes bring variety.

Tanya Peters of Kadena Air Base said her 7- and 5-year-old daughters will eat more for lunch when they buy from the cafeteria now that there is a wider selection &#8212; especially the addition of noodles.

Stars and Stripes reporter Megan McCloskey contributed to this report.

Healthier choices coming in, while other items on way out

The Army and Air Force Exchange Service, which provides lunch for 110 Department of Defense Education Activity schools around the globe, changed its menu this year. AAFES officials said the changes were based on survey results and a desire to make meals healthier.

Sloppy JoesChicken poppersPeasMost dessertsChanges also are in store for the a la carte line, where students will see smaller portions being offered. Items such as corn dogs and pizza now will feature whole-wheat coatings or crusts. French fries will disappear and be replaced by oven fries. Fruit drinks with less than 50 percent juice join soft drinks on the no-purchase list.