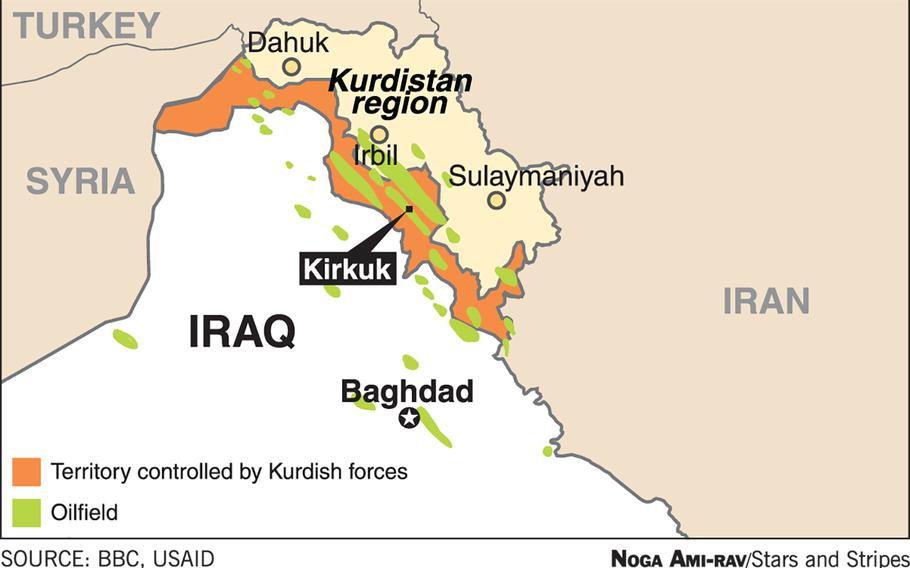 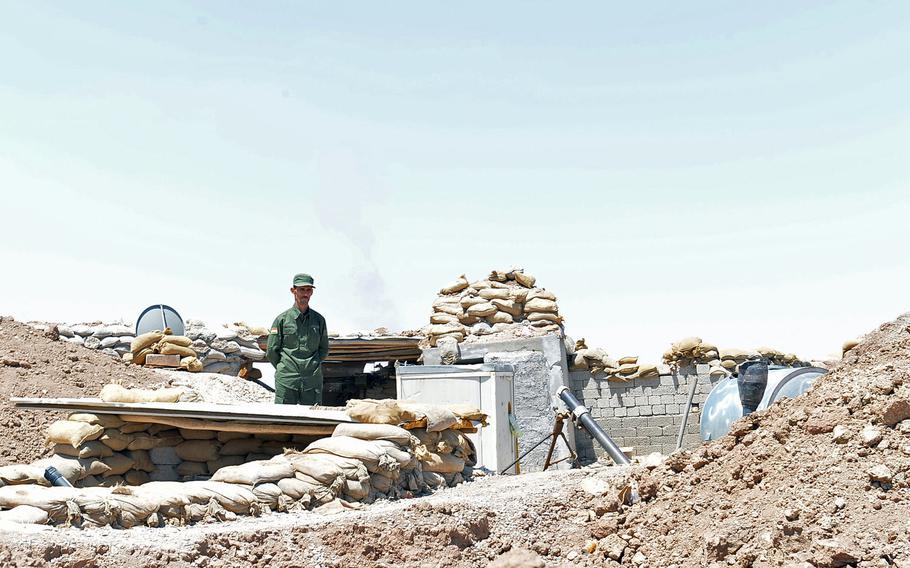 Buy Photo
A peshmerga fighter stands on the berm at the Kurdish front lines about 15 miles from Islamic State-occupied Mosul on July 14, 2016. Troops here are among the closest Kurdish forces to Iraq's second-largest city and the militants' last urban stronghold in Iraq. (Chad Garland/Stars and Stripes) 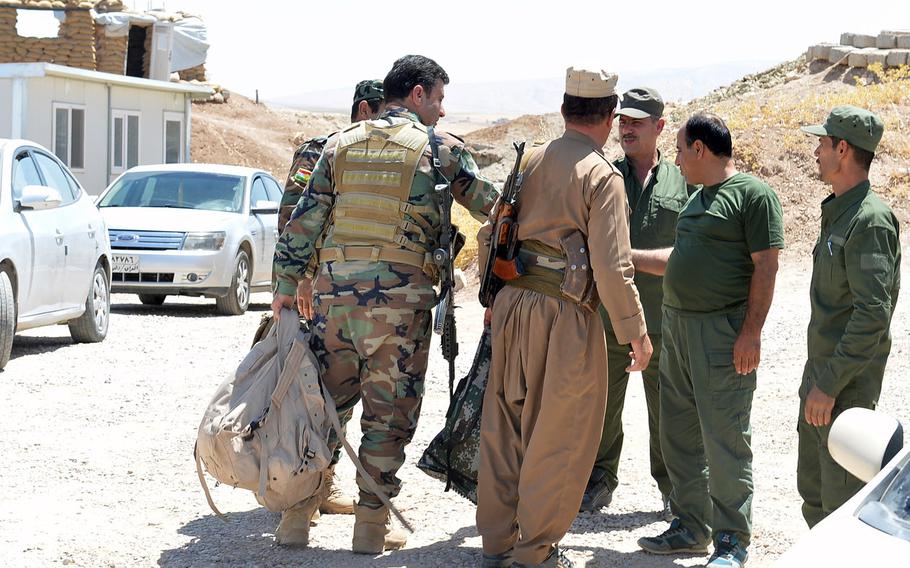 Buy Photo
A group of peshmerga fighters gathers at the front lines in the fight against the Islamic State group at Narawan, about 15 miles from Mosul, on July 14, 2016. (Chad Garland/Stars and Stripes) 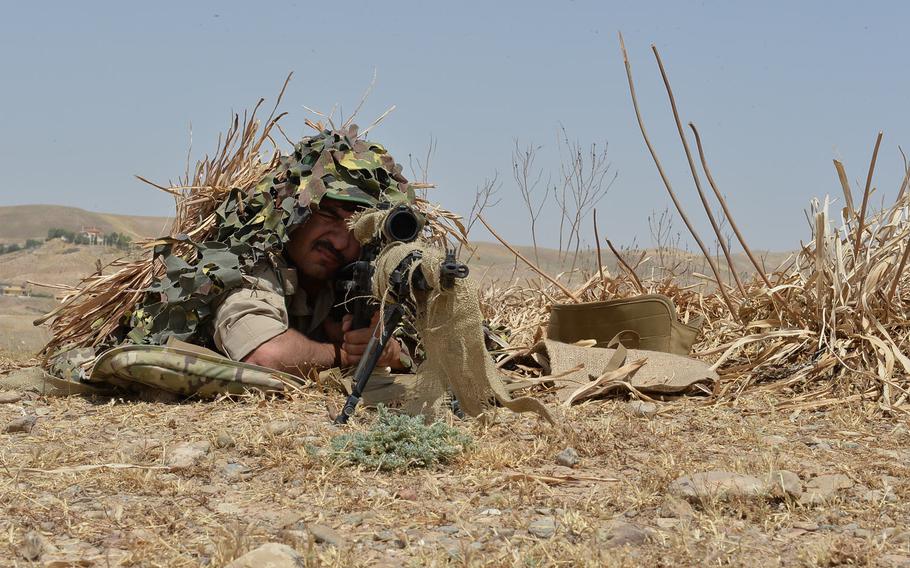 Buy Photo
A Kurdish sniper sights in on a target during an exercise at a training site outside Irbil, the capital of Iraq's Kurdish region, on July 26, 2016. The exercise was the culmination of a training program to prepare peshmerga fighters for combined arms operations with snipers and artillery supporting infantry troops. (Chad Garland/Stars and Stripes)

Exactly a year after U.S.-backed Iraqi and Kurdish forces launched an operation to rout the Islamic State group and retake Mosul, Iraq’s second-largest city, those U.S.-trained forces were pitted against each other in northeast Iraq on Monday.

Iraqi federal forces and state-backed militias began a pre-dawn advance to retake military bases and oil fields around the city of Kirkuk, which Kurdish forces, or peshmerga, had controlled for more than three years.

WHY IS THIS HAPPENING?

Tensions in the region have mounted since a majority of Kurds in northern Iraq voted for independence in a nonbinding referendum last month.

The Kurds, who have long sought their own state, have enjoyed some form of self-rule in the country’s north for more than two decades. But the voting was also conducted in areas outside the nationally recognized Kurdish region, including oil-rich Kirkuk, which are disputed territories.

Last November, Kurdish President Masoud Barzani, who ordered the referendum, said areas freed from ISIS by the peshmerga but outside Kurdish boundaries would not be returned to Baghdad’s direct control.

In the wake of the referendum, Prime Minister Haider al-Abadi’s government ordered the regional government to surrender control of its two international airports and land borders. The Iraqi government also sought to regain control of Kirkuk and issued an ultimatum for the peshmerga to withdraw from its positions there late last week, after negotiations broke down.

WHY IS KIRKUK IMPORTANT?

Iraqi Arabs and Kurds consider the multiethnic city of around 1 million people a cultural capital, and it’s been at the center of a long-running dispute between the Kurdish region and the federal government. It is also home to Iraqi military bases and its oil fields produce a significant amount of the country’s oil.

The Iraqi constitution had set a 2007 deadline for a referendum on whether to integrate Kirkuk into Iraq’s Kurdish region, but it was never held. In 2014, as the Iraqi army collapsed in the face of ISIS, Kurdish forces took full control of the area. The Kurdish government has depended heavily on the oil fields for its revenue.

WHO ARE THE FORCES INVOLVED?

Here are the main armed groups in and around Kirkuk, where the Iraqi army has reportedly retaken control of the K1 military base northwest of the city, a military airport to the city’s east and one of six oil fields in the disputed area:

1. Kurdish forces, known as the peshmerga, are split between the region’s political parties that control them — Barzani’s Democratic Party of Kurdistan and the Patriotic Union of Kurdistan, a party co-founded by Iraq’s president, Fuad Masum. Kurdish civilians, including old men, have also reportedly taken up arms.

2. The Iraqi Security Forces, including the army, federal police and elements of the U.S.-trained, elite Counter Terrorism Service. The government has said these units are instructed to avoid clashes and protect civilians in the area.

3. Militias sanctioned by the Iraqi government, including Iran-backed Shiite groups. Some of these groups fought American forces after the 2003 invasion and have been accused of committing atrocities against Iraqi minorities during the ISIS fight.

In addition to these main groups, members of the Kurdish Workers’ Party, or PKK, a US-designated terrorist organization, have reportedly been seen in Kirkuk. Some reports claim Iranians are mixed in among the militias. According to the Washington-based Institute for the Study of War, Gen. Qassem Suleimani, commander of the Iranian Quds Force of the Revolutionary Guards, traveled to Iraq, likely to deliver an ultimatum from Iran for the Kurdish withdrawal.

WHAT IS THE U.S. DOING ABOUT IT?

The United States has trained, equipped and advised the Iraqi forces, peshmerga and some of the state-sponsored militias for fighting ISIS, but officials have said advisers are not currently supporting either side’s activities near Kirkuk.

Officials say they are monitoring military movements in the area, which they said have not been attacks, despite “limited exchange of fire” that they classified as a “misunderstanding.”

HAS THE ISLAMIC STATE BEEN DEFEATED IN IRAQ?

ISIS has been routed from about 95 percent of the Iraqi territory it once claimed, which comprised nearly one-third of the country. It maintains strongholds in the country’s west, along the Syrian border.

With the anti-ISIS forces turning on themselves, some observers fear that the group could leverage instability in Iraq to its advantage, as it did in Syria during its rise in 2014.

There are signs the group is adjusting its tactics as it loses ground in Iraq and Syria. The latest issue of the group’s weekly Al-Naba bulletin called on its members to resume ambush attacks against Iraqi and coalition forces. Its predecessor, Islamic State of Iraq, used such tactics after suffering heavy losses in 2008, according to the Middle East Media Research Institute.