What’s ahead for carrier presence in Japan 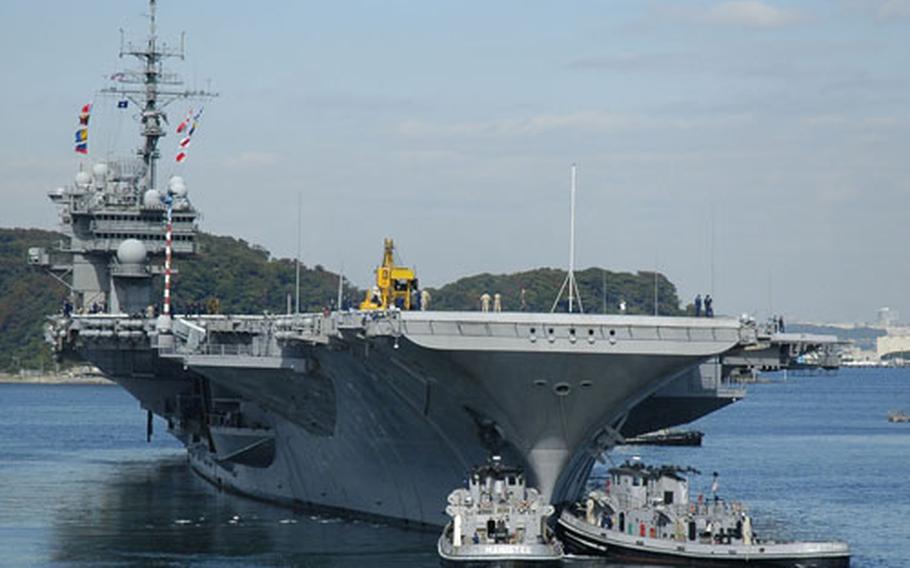 Assisted by two harbor tug boats, the USS Kitty Hawk steams away from the pier at Yokosuka Naval Base, Japan, to begin its fall underway period. Navy officials announced Friday the Kitty Hawk will be replaced in 2008. (Tony Peters / U.S. Navy)

The nuclear-powered aircraft carrier planned for Yokosuka Naval Base in 2008 will be faster, safer and better able to counter threats in the region, U.S. officials said Friday.

&#8220;The United States believes that a nuclear-powered carrier forward deployed in the Pacific will significantly contribute to the peace and stability of Japan, the United States and the entire region,&#8221; Schieffer said. &#8220;It is time to bring a more modern carrier to Japan.&#8221;

The 44-year-old Kitty Hawk is slow to get going, requires regular replenishment at sea and &#8212; Navy leaders say &#8212; poses less of a deterrent than its replacement will.

The new carrier, which has yet to be announced, will carry with it the Navy&#8217;s most modern technology.

&#8220;The assignment of a Nimitz-class carrier to the U.S. Navy&#8217;s forward-deployed forces absolutely is the right thing to do for the U.S.-Japan alliance, for the defense of Japan and the security of the western Pacific region,&#8221; Kelly said. &#8220;The security environment here in the western Pacific region increasingly requires that the U.S. Navy station the most capable ships forward.&#8221;

The new ship not only will start faster, but won&#8217;t require top-offs along the way and therefore will arrive at locations a day sooner per week than the Kitty Hawk could, Kelly said Friday in an interview with Stars and Stripes.

And once there, it will be capable of sustaining operations twice as long as the Kitty Hawk, he added.

During the tsunami relief mission last year, Kelly commanded the carrier strike groups in the region, including the Kitty Hawk and the nuclear-powered USS Abraham Lincoln, which flew relief missions for six weeks near Indonesia.

When the Lincoln was dispatched to Indonesia from Hong Kong, it arrived a day sooner than the Kitty Hawk could have and did not require replenishment during its entire mission, Kelly said.

Without the need for petroleum fuel to operate, the ship can carry more aviation fuel and weapons. It also brings more modern command-and-control and communications technology and greater survivability and damage control.

Nuclear-powered carriers in general need to refuel their reactors once every 20 years, compared to refuelings once every four days to keep the Kitty Hawk&#8217;s engines running, according to research and naval groups that have published studies on the carriers. The Kitty Hawk travels less than two feet for every gallon of fuel burned.

Despite the advantages, the decision to select a nuclear-powered replacement for the Kitty Hawk wasn&#8217;t taken lightly, Kelly said, but it is essential.

&#8220;It brings our most capable ships with the greatest amount of striking power if necessary, in the timeliest manner, to any regional crisis,&#8221; he said.

Towers 20 stories above the waterline with a 4.5-acre flight deck.

Steering accomplished by two rudders, each 29 feet by 22 feet and weighing 50 tons.