What punishment could Bergdahl face? 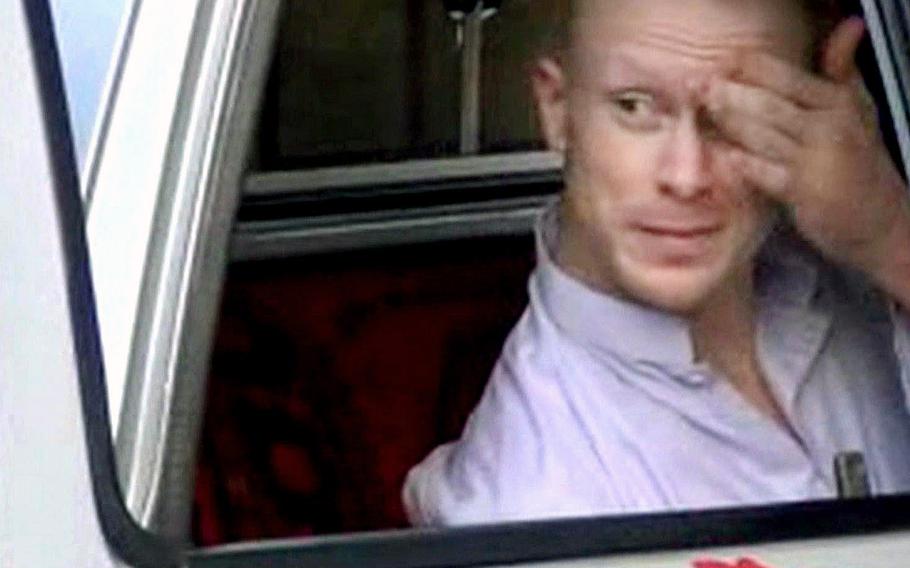 WASHINGTON — What started with a joyful White House Rose Garden announcement Saturday on the return of Army Sgt. Bowe Bergdahl from Taliban captivity soon took a darker turn, with commentators across the Internet calling for the ultimate legal penalty.

“If he’s guilty of desertion, the only orientation I care about is that he’s facing the firing squad,” a reader commented Wednesday on Stripes.com.

Military legal experts say chances are zero the Army would pursue such an unusual course — only one American has been executed for desertion since the 19th century — with some arguing such a sentence wouldn’t even be legal in the current conflict.

Realistically, what punishment could Bergdahl face? Former unit members have said he deserted his outpost in Paktika province, causing death and injury among soldiers who had to look for him.

There’s no clear answer, experts say. Military authorities will have to weigh a range of factors, including what Bergdahl did, the effect on his fellow soldiers and what’s best for the U.S. military as a whole. If he’s found to have committed misconduct — whether going absent without leave or deserting his unit — possible penalties range from an administrative discharge up to several years in prison.

“The military justice system doesn’t have strict rules about how cases are supposed to be handled, so you could potentially have a deserter who just gets an administrative discharge,” said Eugene Fidell, a former president of the National Institute for Military Justice who teaches military law at Yale University.

But given the claims about Bergdahl’s actions from other soldiers, Fidell said a court-martial, which can end in penalties ranging from a dishonorable discharge to prison, was becoming increasingly likely.

“I think they do have to send a message,” Fidell said. “This sounds to me like desertion. I don’t want to convict him in the media, but if I were a convening authority, the information that’s now available would probably convince me to send it to an Article 32 investigation.”

That seems likely, said Chris Jenks, an assistant law professor at the Southern Methodist University Dedman School of Law who served as an Army prosecutor. But alternately, the Army may fear a circus-like trial and elect to move Bergdahl out quickly through an administrative action.

“At the end of the day, the Army is going to have to decide whether eliminating Bergdahl from the Army or a harsh characterization of his service is the top priority,” he said. “If moving him out expeditiously is the priority, they can chapter him and give him a general discharge or other-than-honorable discharge.”

“But if you want to have a harsh judgment on his service in the Army, you’re looking at the possibility of a long and drawn-out ordeal.”

A simpler way to deal with Berdgahl than a desertion charge could be to administratively classify him as having gone AWOL, eliminating the need to pay him hundreds of thousands of dollars in back pay and POW benefits from the nearly five years Bergdahl was in Taliban hands, Jenks said. Next, the Army could move to discharge him with an other-than-honorable discharge.

Bergdahl’s promotions and time in service would earn him in the neighborhood of $125,000 in basic pay during the time he was in captivity. And according to the Army’s official benefits website, POWs are eligible for at least 50 percent of the global average per diem rate during each day of captivity.

“Even if 50 percent only works out to $100 a day, after five years you’re into the hundreds of thousands,” Jenks said.

Army POWs are also eligible for Basic Allowance for Subsistence and Housing Payments during their captivity regardless of whether they were authorized at the time of capture, as well as interest on uncollected payments and other benefits.

Considerations about what Bergdahl suffered in captivity could color the Army’s decision about what penalty to seek, said retired Maj. Gen. John Altenburg, a Washington lawyer who served as deputy judge advocate general for the Army.

“If the facts show that he walked away deliberately and it was with the specific intent to avoid hazardous duty, I think a court martial becomes more likely,” he said. “On the other hand, depending on his physical and mental condition, and what we learn about the conditions of his captivity, then that may offset the desire for a court martial.”

But a decision about his legal status may not be made quickly.

The public and the media might be hungry for answers, but expect to wait at least a month, Altenburg said. The Army’s first priority must be attending to his physical and mental health after five years in captivity.

“The people that are charged with making the decision are not in a hurry, because they want to be thorough, and they want to know all the facts,” he said.

Although the U.S. military has not divulged specific details about Bergdahl’s condition or state of mind during his “reintegration” at a military hospital in Germany, Jenks said it’s unlikely the Army has begun questioning of the sort that could be used in a court-martial: He has to be fully advised of his legal rights before any such questioning could occur.

And what about observers recommending the death penalty for Bergdahl?

The last such sentence was imposed on Army Pvt. Eddie Slovik during World War II, under far different circumstances. Slovik, serving in France, had threatened to desert his unit if sent to a frontline fighting position. After making good on the threat, he presented a letter explaining his actions to a soldier who gave it to an MP.

Slovik refused repeated offers to destroy the letter and return to his unit, saying he preferred jail. But to his shock, he was sentenced to death at court-martial. Gen. Dwight D. Eisenhower refused to commute his sentence after such a flagrant offense, and on Jan. 31, 1945, Slovik became the only American servicemember of the war, or since, to be executed for desertion.

Legal experts scoffed at the idea that any military official today would even consider such an action against Bergdahl. And it would probably be illegal, they agreed, because desertion during wartime requires there to be an officially declared war, unlike the more than 12 years of fighting in Afghanistan.

“The Rules for Court-Martial define ‘war’ as ‘a period of war declared by Congress or the factual determination by the President’ — neither of which have occurred,” Jenks wrote to Stars and Stripes in an email. “So the death penalty is out as a matter of law.”