What is North Korea’s motive in sinking South Korean ship? 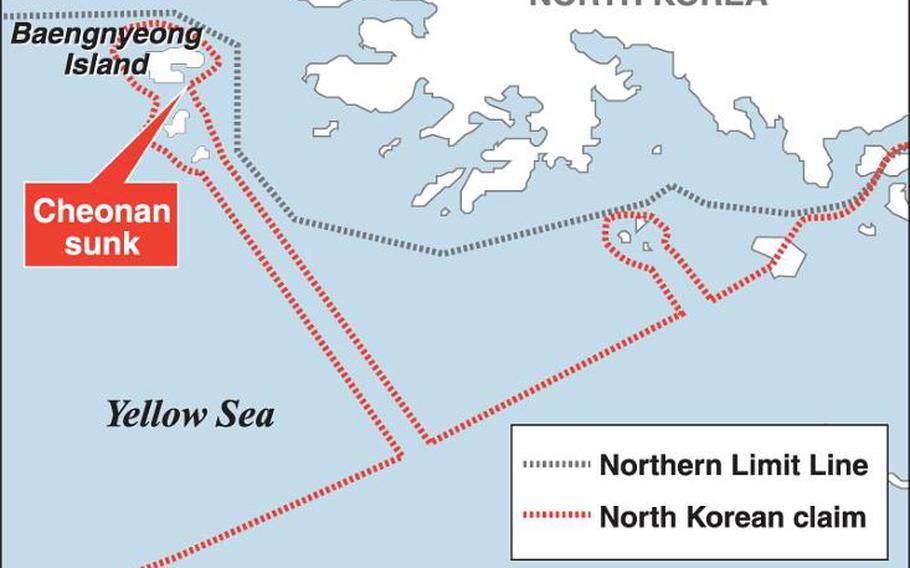 SEOUL, South Korea &mdash; As South Korea made its case last week that North Korea was behind the sinking of a South Korean patrol ship, it left at least one question unanswered: Why?

What motive did the North have for the brazen torpedo attack March 26 in the Yellow Sea near the maritime border between the two Koreas, and what does it have to gain besides another round of world condemnation and sanctions?

While South Korean officials deliberate on how to respond to the attack, experts interviewed by Stars and Stripes offered a range of possible North Korean motives &mdash; from simple payback to another in a long string of incidents the impoverished and reclusive communist nation has used to gain international attention and concessions.

The sinking of the Cheonan, which killed 46 of 104 sailors aboard, was the latest of several North Korean provocations near the disputed maritime border, including an exchange of artillery fire between the two Koreas in January.

A more serious exchange of fire between North and South Korean patrol boats occurred in November.

No South Koreans were injured, but according to media reports, a North Korean officer and three sailors are believed to have died and a North Korean vessel was badly damaged.

&ldquo;They really took a beating,&rdquo; said Daniel Pinkston, a North Korea expert with the International Crisis Group. &ldquo;From North Korea&rsquo;s perspective, they probably look at the situation now as being even. They settled the score.&rdquo;

A multinational, South Korean-led team of investigators, citing &ldquo;overwhelming&rdquo; evidence, concluded Thursday that a North Korean midget submarine torpedoed the ship. North Korea has steadfastly denied involvement, and has threatened that any retaliation from the South, including pushing for United Nations sanctions, will be viewed as an act of war.

Bruce Bechtol, an international relations professor at the Marine Corps Command and Staff College in Quantico, Va., and author of &ldquo;Red Rogue: The Persistent Challenge of North Korea,&rdquo; said the attack on the Cheonan was North Korea&rsquo;s latest attempt to put changing the western maritime boundary on the negotiating table.

The Northern Limit Line, a jagged border that separates fishing waters between the two countries, was established by the United Nations after the 1950-53 Korean War but has never been recognized by North Korea.

The communist nation claims the boundary is much farther south, and views any movement north of its recognized line as a threat to its sovereignty, Bechtol said.

Former South Korean President Roh Moo-hyun, who advocated a liberal &ldquo;sunshine policy&rdquo; of cooperation with the North, promised to redraw the line. But his successor, conservative Lee Myung-bak, has refused to do it, Bechtol said.

&ldquo;The North Koreans were very close to getting what they wanted through Roh, and that just didn&rsquo;t happen,&rdquo; he said. &ldquo;Now they&rsquo;re trying to get what they want.&rdquo;

Bruce Klinger, an expert on northeast Asia with the conservative Heritage Foundation think tank in Washington, said the attack also fits North Korea&rsquo;s pattern of raising international tensions to get concessions from its opponents.

&ldquo;North Korea feels that it has additional leverage when it&rsquo;s being paid attention to as well as when tensions are higher,&rdquo; he said. &ldquo;It also tends to lash out either when it feels weak or it perceives the outside world perceives it as weak. A Korean adage is the &lsquo;barking of a wounded dog.&rsquo;&thinsp;&rdquo;

North Korea may have also felt it could get away with such an attack because neither the U.S. nor South Korea has ever retaliated militarily to the North&rsquo;s provocations since the war because of a fear of an all-out war, Klinger said.

There were no military responses when North Korean agents attempted to assassinate former South Korean President Chun Doo-Hwan in Myanmar in 1983, or when a bomb that agents placed on a Korea Air jet in 1987 exploded killing 135 people on a flight from the Middle East, according to Klinger.

Other motives for the Cheonan attack could be that North Korea was trying to divert attention from its nuclear weapons program, or ailing North Korean leader Kim Jong Il was trying to demonstrate he is still in control of his regime, said Nicholas Szechenyi, an expert on northeast Asia at the bipartisan Center for Strategic and International Studies in Washington.

Scott Snyder, director of the Center for U.S.-Korea Policy at the Asia Foundation in Washington summed up the attack as a cry for attention and respect, as well as an act of revenge.

&ldquo;I believe the North Koreans took actions really strictly in an inter-Korean context,&rdquo; he said. &ldquo;I think they were trying to send a message to the South Korean administration: Don&rsquo;t take us for granted, and don&rsquo;t think you can ignore us.&rdquo;