What Iraqi troops can expect from the Islamic State in Mosul 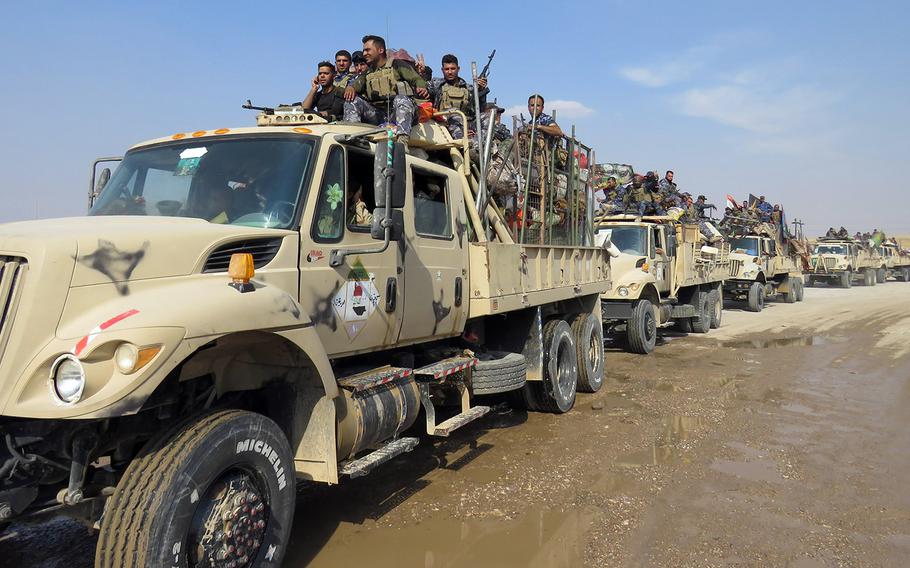 SAN ANTONIO — When the Islamic State of Iraq raised its black banner a decade ago, it transformed the country into a laboratory of guerrilla war, honing tactics and strategies to counter U.S. and Iraqi troops fighting to quell a violent insurgency.

That organization is now the Islamic State group, and it has taken those lessons to Mosul, where the Pentagon estimates 3,500-4,000 fighters are entrenched for a protracted fight. Iraqi special forces moved into the city from the east Friday after taking villages and towns on its outskirts with the support of Kurdish peshmerga fighters.

But the Iraqi military has struggled to advance deeper into the city as they face a seemingly endless stream of suicide car bombs, improvised explosive devices and mortar and sniper rounds.

As the battle continues, here is what Iraqi forces can expect as they move farther into Iraq’s second largest city.

Up close violence of urban warfare

Raw footage of the moving convoys showed armored Humvees lumbering slowly through muddy and narrow streets at a speed that appears no faster than an idle – all while taking fire from insurgents positioned on rooftops.

“The Islamic State has been able to alter the environment to suit it for defense,” said Paul Scharre, a former Army Ranger and director of the future of warfare initiative at the Center for a New American Security, a Washington think tank.

“A mined environment takes away the element of speed. You have to move slowly, and it exposes you. You’re out in the open whether you’re in a vehicle or on foot,” Scharre said.

Prepared and reinforced fighting positions with machine gun and RPG teams are undoubtedly ready to take advantage of meandering troops, he said.

The amount of time and care spent on the Islamic State’s defense is shown in the sophistication of underground tunnels built near Mosul, Scharre said, which allow militants to ambush units, slip away and regroup in other areas.

This can be done to great extent in Mosul, Scharre said. An emphasis to clear areas and move on might allow insurgents to circle behind troops as they advance, he said.

“This war has been going on for a long time. The insurgents have a good handle on what Iraqi tactic and procedures are like, how they move, and they will find ways to exploit that,” Scharre said.

Militants with explosive-laden vehicles and fortified with Mad Max-style armor plating have slowed Iraqi units to a crawl in the east and south. The Iraqi military has already absorbed 240 attacks from suicide vehicle-bombs during the battle, according to a Reuters report published Monday citing Iraqi commanders.

The Islamic State group uses suicide vehicles as more than rolling bombs. The fear that they provoke shapes the battlefield by funneling troops into homes to watch for approaching vehicles, slowing advances in favor of caution.

In one video captured by BBC this week, a suicide vehicle targeted Iraqi special forces vehicles as dismounts lingered in a courtyard to plan their next movement. The explosion killed five Iraqi troops, the BBC report said. Gunfire erupted within seconds of the explosion as dust filled the air, obscuring insurgent positions as disoriented troops struggle to triage causalties under fire.

The use of vehicle-borne IEDs has changed since the height of the Iraq insurgency, said Brian Castner, a former Air Force bomb technician and author of All the Ways We Kill and Die, a book on the hunt for bombmakers in Iraq following his two deployments in 2005 and 2006.

Vehicle bombs would typically zero in on soft targets like a market or fixed positions like army checkpoints, Castner said. But the tactical use of using vehicle bombs to assault front lines of peshmerga fighters and attack the flank of troops on the street is a growing problem for Iraqi forces, Castner said.

“Vehicle-borne IEDs are the biggest bang [the Islamic State group] can get for their buck without artillery or an air force,” Castner said, calling their prolific use in Iraq an equalizer.

The use of a car bomb was commonly the beginning and end of an attack in the early phases of the Iraqi insurgency, he said, but the incorporation of a suicide vehicle to ambush a platoon-sized element, along with small arms fire, shows an uncommon degree of sophistication.

A constant threat of IEDs

The hallmark weapon of the wars in Iraq and Afghanistan used to kill thousands of troops, the IED, has similarly confounded Iraqi forces during the fight for Mosul. A saturation of homemade bombs halt convoys as explosive ordnance disposal troops diffuse or destroy them.

The first U.S. servicemember killed during the operation, Navy Chief Petty Officer Jason Finan, was an EOD technician with Navy SEALs advising elite Iraqi forces as they advanced into Mosul. He was killed Oct. 20 as he warned Iraqi troops of an IED, the Pentagon said.

There has been a constant shift of various triggers and components used to attack forces in Iraq since the insurgency began 13 years ago, Castner said, as capabilities have become advanced and rudimentary and back again as U.S. forces curtailed ground operations.

Early during the insurgency, militants relied on wireless transmitters, such as garage door openers and two-way radios, to detonate explosives targeting armored vehicles. A wireless signal creates standoff for a bomber, who could exercise greater control of when to detonate the bomb, and which vehicle to strike, Castner said.

As the Pentagon spent billions of dollars to roll out radio frequency jammers, insurgents scaled back to simple components to set off explosives, such as copper wires and batteries, which are vulnerable to visual identification by Iraqi troops as wires snake from the road leading to enemy positions. Efforts to sell sophisticated jamming technology to the Iraqi military has fallen short, Castner said, and limited access to jamming equipment has made wireless IED detonations more attractive, and potentially more accurate and lethal, for Islamic State militants.

It is not clear whether Iraqi troop carriers, including armored Humvees and mine-resistant vehicles, are commonly equipped with radio frequency jamming antennas. However, a June report on the offensive buildup from IHS Jane’s Defense Weekly speculated some special forces vehicles, including U.S.-built Oshkosh M-ATVs, could include radio jamming capability.

Iraqi forces could possess jamming equipment but choose not to use it on the battlefield. The antennas jam and overload a wide spectrum of radio frequencies, including hand-held radios used by infantry units to closely coordinate movement. Flooding out radio signals would make it difficult for units to support each other during assaults, particularly in a dense urban operation such as Mosul, where platoons are isolated from each other and can quickly become overwhelmed in an ambush.

Islamic State operations to rig houses with explosives will add additional complexity to the clearing operations as troops push farther into Mosul.

The fundamental mission of clearing cities involves searching entire neighborhoods house by house and flushing out militants or killing them inside. Homes are also the only refuge for troops taking machine gun and sniper fire while on dismounted missions.

The prevalent use of homes by Iraqi and U.S. troops on the battlefield during the insurgency led the Islamic State group to change strategy: use a house itself as the bomb, which can kill a squad or more underneath the rubble after an explosion. The blast is typically triggered by a tripwire or pressure plate in a stairwell or entry way as troops enter and clear the building.

U.S. troops operating in Baqouba during the 2007 troop surge found more than 40 rigged houses, according to New York Times reporter Michael Gordon’s book The Endgame. One of them killed a group of Iraqi soldiers, Gordon wrote. Four U.S. infantrymen were killed in a similar attack in August 2007, according to The Associated Press.

The specter of wired houses is enough to influence tactical movement, Scharre said, while invoking a classic battlefield strategy.

Clusters of houses rigged to explode will slow clearing operations and deny freedom of movement, similar to the operating theory of a minefield, he said. Coupling that strategy with waves of ambushes, and barricading or chaining gates leading to other houses could force Iraqi troops to take cover in buildings wired for denotation.

“The Islamic State has been very good at instilling the fear that everywhere they go is booby-trapped,” Castner said, though he cautioned there is a practical limit of how many houses in Mosul could be rigged as civilians remain in large parts of the city.

“Two things are at odds,” he said. “Meticulous searching ensures a neighborhood is clear. But it also slows things down. You would want to move quickly to prevent the Islamic State from rigging more houses.”

Castner does not see a quick victory on a battlefield teeming with the bombs that he obsessed over following his career in the Air Force.

“It’s going to be ugly and slow. And I don’t know how to make it less ugly and less slow,” he said.

Editor’s Note: The writer served as an Army infantryman in Iraq with the 3rd Stryker Brigade, 2nd Infantry Division in 2007, which led the operation to liberate Baqouba, the self-proclaimed capital of the forerunner to the Islamic State group.