What does 'moving on' mean? 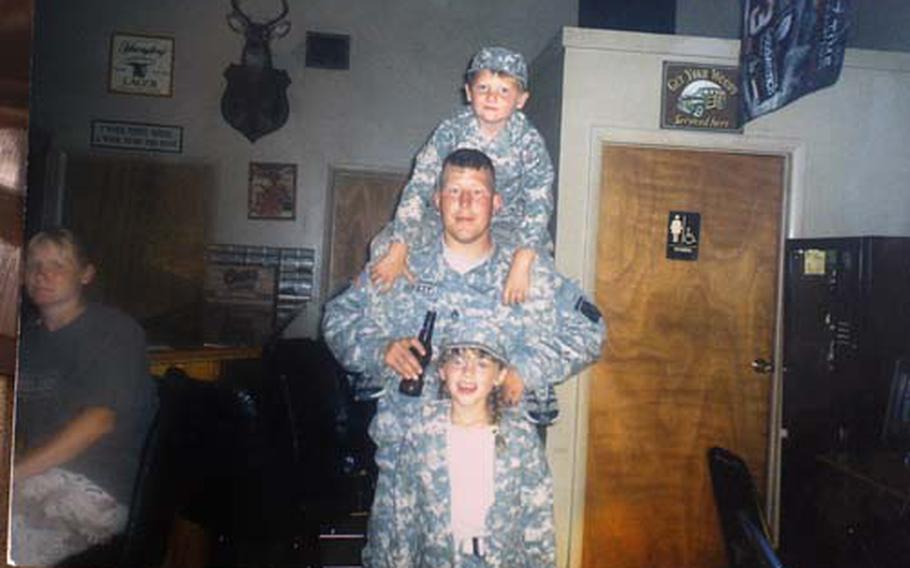 Tyler with his two children, Liam and Kassidy. (Courtesy of Kristy Pickett) 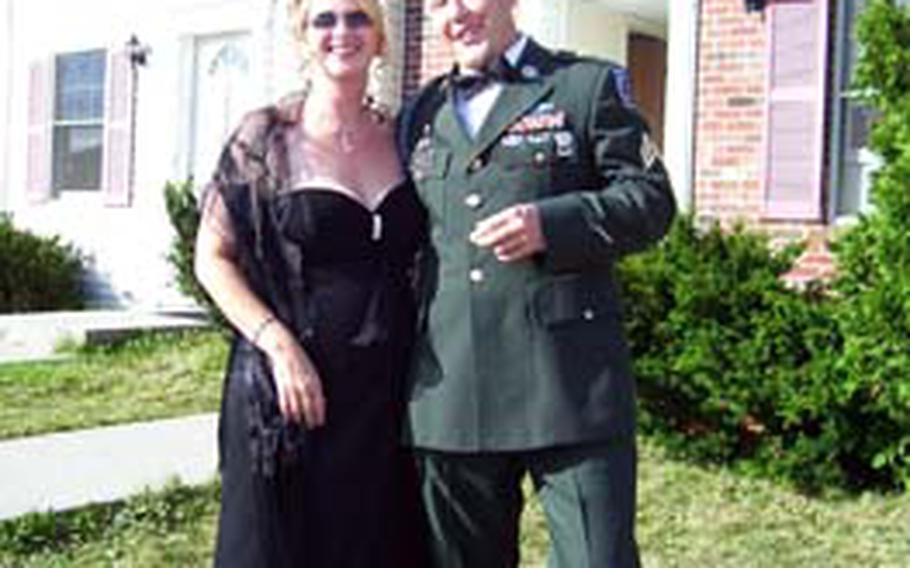 Kristy Pickett sat in front of the camera, willing herself not to cry.

She was a new widow, having learned just days before that her husband, Tyler, had been killed in Iraq. Which meant she wasn&rsquo;t the family member of an active-duty soldier any longer. Which meant the Army required a new identification card.

So Pickett posed, stunned by grief and fatigue, for a new ID photo.

&ldquo;That&rsquo;s the photo you&rsquo;ll carry for years,&rdquo; said Bonnie Carroll, founder of a support group for families that have lost loved ones fighting the nation&rsquo;s war. &ldquo;Every time you pull out your ID card, you&rsquo;ll be reminded.&rdquo;

The abrupt change in status, swiftly documented by what can seem like an unfeeling Army bureaucracy, is one of the singular rituals of grief that the families of the war dead must endure.

Daughter, girlfriend, mother, soldier&rsquo;s wife &mdash; Pickett had been all these in her life. Now she was something else.

&ldquo;I&rsquo;m 30-some years old and I&rsquo;m a widow,&rdquo; Pickett said. &ldquo;What the hell is that about?&rdquo;

A year after Tyler, 28, became the only soldier killed in a suicide bombing at the &ldquo;Triple Deuce&rdquo; patrol base near Kirkuk on June 8, 2008, Pickett is still in the midst of her grief, navigating the harsh realities of her new world.

Despite her two children, her friends and her family; despite the $500,000 the government paid her in death benefits; despite her belief that her husband died for a purpose, doing what he loved, Pickett still struggles with how to make sense of her life now.

&ldquo;I didn&rsquo;t get to see him one last time,&rdquo; she said. &ldquo;I know he&rsquo;s dead and not coming back. But it&rsquo;s weird to go on, I guess.&rdquo;

Some days, though, it feels as if Tyler is merely away on another long deployment.

&ldquo;You&rsquo;re used to your soldier being gone,&rdquo; she said. &ldquo;You just go on with your routine. Nothing really changed after he died. His clothes are in his dresser, the garage still has the mess he left.

&ldquo;I think, &lsquo;Well, Tyler will be home to do that,&rsquo;&thinsp;&rdquo; she added. &ldquo;Well, no. He won&rsquo;t.&rdquo;

Pickett, a candid and warm woman, is living the life of a war widow.

&ldquo;Most people have a very hard time coming to grips with the reality. Sometimes it takes a year or more,&rdquo; said Darcie Sims, a psychologist and bereavement expert in Puyallup, Wash., near Fort Lewis.

&ldquo;The head gets used to it much quicker,&rdquo; added Sims, whose son&rsquo;s death three decades ago devastated her and who has worked with military families for many years. &ldquo;The heart is still waiting for the doorbell or the footsteps.&rdquo;

Grief: The word is Anglo-French, for injustice or calamity, and from Latin, for heavy, according to the Merriam-Webster dictionary.

It can seem unbearable, and lasts far longer that most people want to acknowledge.

&ldquo;There&rsquo;s a lot of pushing &mdash; &lsquo;Come on, a lot of people are widowed,&rsquo;&thinsp;&rdquo; said Julie Cicero, a social worker and author who specializes in grief therapy. &ldquo;&thinsp;&lsquo;You&rsquo;re young, you&rsquo;ll find someone else.&rsquo; Even your most compassionate friends and family think you should be back to normal in six months.&rdquo;

But six months is just the beginning.

&ldquo;In reality, we never get over this; we get through this,&rdquo; said Sims. &ldquo;Once the casseroles quit coming, you&rsquo;re supposed to pick up life as it was. But you can never go back to who you were.&rdquo;

In some ways, survivors of those killed in combat have more support than anyone else. There is the respect accorded fallen warriors, the parades and honor guards, the motorcycle corteges.

Soldiers in uniform and schoolchildren waving flags lined the streets when Tyler Pickett&rsquo;s body was brought home. Friends, family and fellow soldiers came from South Korea, Japan, Canada, Florida, Wyoming &mdash; all over the world &mdash; for the service in upstate New York. It was one of three memorials for Tyler.

&ldquo;What they did &mdash; bringing him home and the services &mdash; were amazing to me,&rdquo; Pickett said. &ldquo;It&rsquo;s not just a family grieving, it&rsquo;s an entire community.&rdquo;

She leaned on soldiers for support, and they didn&rsquo;t let her down. A friend was sent to Iraq to return with Tyler&rsquo;s remains, even though he wasn&rsquo;t technically the correct rank for the task.

A local TV station covered the funeral, which was fine until Pickett wanted a cigarette: As much as she needed a smoke, she didn&rsquo;t want the TV camera to film her because Tyler had always wanted her to quit. So the soldiers lined up to block her from view.

But soon enough, it was just Pickett alone, crying every morning on the way to work. It was just her, alone with a tumbler of whiskey at night. Just her, taking care of her two children &mdash; the aspect of her life, she said, that really enabled her to go on.

Pickett has few complaints about the Army&rsquo;s response to her husband&rsquo;s death. The base commander, she said, was caring, approachable, sincere in his efforts to help in every way he could.

Even the soft-hearted casualty assistance officer, who choked up as he arrived at her doorstep to notify her of Tyler&rsquo;s death, touched her.

&ldquo;You could see him tear up. He couldn&rsquo;t get the words out,&rdquo; Pickett said. &ldquo;I felt so bad for him. I said, &lsquo;I know what you have to tell me. It&rsquo;s OK. You have to do it.&rsquo;&thinsp;&rdquo;

But not every surviving spouse follows the heroic narrative or accepts what the military has to offer them in their grief.

&ldquo;There are many families who will not accept the medals,&rdquo; Sims said. &ldquo;They say, &lsquo;That&rsquo;s what you give me? A piece of metal?&rsquo;&thinsp;&rdquo;

In the immediacy of her loss, when Pickett was asked if the base could send over a &ldquo;care team,&rdquo; she declined.

&ldquo;I knew these people would come into your house and take care of things,&rdquo; she said. &ldquo;But they&rsquo;re strangers.&rdquo;

And there was one aspect of the official process that bothered her. When she received a box of Tyler&rsquo;s personal effects from Iraq, she was hoping to be able to touch what he had touched most recently. She craved one last reminder of her husband&rsquo;s scent, on his uniform or maybe his pillow. She didn&rsquo;t care if it was dirty &mdash; she&rsquo;d always taken care of his dirty clothes and gear, washing it, folding it, putting it away.

She pulled at the latch on the box &mdash; and was overcome with disappointment.

&ldquo;You open it, and it smells like a hospital,&rdquo; she said.

Even the military death benefit can be problematic.

&ldquo;All the dreams that the money would make come true are pointless,&rdquo; said Carroll, the founder and director of the Tragedy Assistance Program for Survivors, which offers free support and crisis intervention for anyone who&rsquo;s lost a loved one serving in the military. &ldquo;A new future has to be created.&rdquo;

Pickett and her husband had talked a lot about the future &mdash; theirs together, and hers alone if he didn&rsquo;t make it home.

Use the money, he told her, for the children&rsquo;s education, for going back to school herself, paying off the house note and providing for his parents.

They always had talked frankly like that, she said. To the shock of family and friends, they had eloped four months after they met in 2005, on Valentine&rsquo;s Day &mdash; &ldquo;the luckiest day I know,&rdquo; Pickett said.

&ldquo;I know it sounds crazy &hellip; but we literally spent a month talking about it &mdash; everything that could go wrong. We discussed everything we could think of: the Army, the kids, money, goals, moving someday to Wyoming.&rdquo;

Tyler was from Wyoming, and he cherished the outdoor life. He loved camping, hunting, four-wheeling, football, &ldquo;Friends&rdquo; reruns and Bud Light.

He talked slowly, she said, and with purpose; he was so methodical and by the book that his soldiers called him &ldquo;the Standard Man.&rdquo;

So some subjects were off-limits.

&ldquo;Tyler would not discuss the things the Army told him not to,&rdquo; Pickett said &mdash; or reveal what he&rsquo;d seen and done in the war. &ldquo;The actual details of what happened, he didn&rsquo;t think a woman should hear.&rdquo;

&ldquo;We argued while he was there,&rdquo; Pickett recalled. &ldquo;I said, &lsquo;I want you out of the service.&rsquo; And after a very long and scary silence, he said, &lsquo;But what if that&rsquo;s what I love, and what I was meant to do?&rsquo;&thinsp;&rsquo;&rsquo;

Pickett knows she couldn&rsquo;t have stopped Tyler. He deployed late because of a torn esophagus, when he could have stayed behind. &ldquo;He had to be with his guys,&rdquo; Pickett said. &ldquo;He couldn&rsquo;t take being in the rear detachment.&rdquo;

Time passes and eventually, survivors try to determine their new place in the world.

Pickett has noticed how people act around her, how they whisper about &ldquo;the widow&rdquo; or lean in and ask her how she &ldquo;really&rdquo; is doing.

She still wears her wedding ring. She can&rsquo;t imagine ever marrying again.

She met another widow last spring who had married again &mdash; to another soldier. Pickett was amazed.

&ldquo;How?&rdquo; she said. &ldquo;To have that kind of strength, to get through that and to face it again &mdash; that is awesome to me. The possibility of that happening again &hellip; would be too much.&rdquo;