Wet summer rough on base roofs 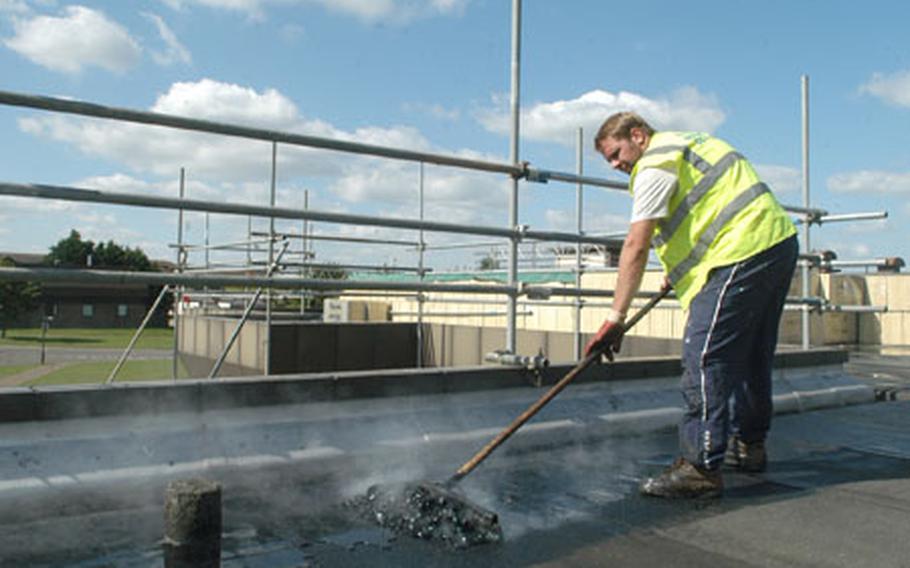 Scott Thurston, of Total Roofing Services, spreads hot tar on the roof of the Eagle&#39;s Landing building on RAF Lakenheath. This building and other Lakenheath facilities have had roof work done this summer, one of the wettest on record. (Sean Kimmons / S&S)

Scott Thurston, of Total Roofing Services, spreads hot tar on the roof of the Eagle&#39;s Landing building on RAF Lakenheath. This building and other Lakenheath facilities have had roof work done this summer, one of the wettest on record. (Sean Kimmons / S&S) 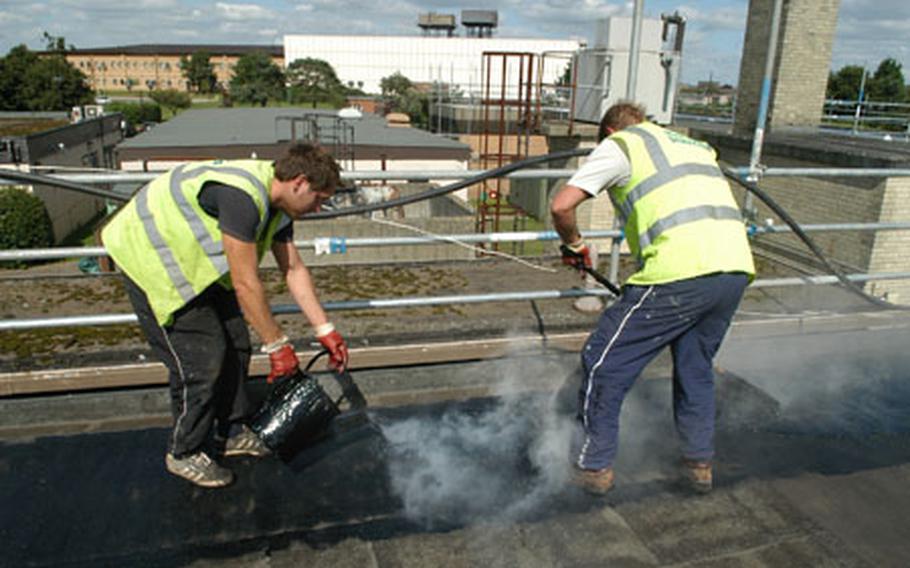 RAF LAKENHEATH, England &#8212; One of the wettest summers on record has underscored the problem of aging roofs in need of repair.

The stormy summer has been the wettest in England and Wales since 1912, when 16.1 inches of rain dropped from the sky. On Wednesday, the summer&#8217;s rainfall stood at 13.7 inches, according to the British environmental and weather organization Met Office.

&#8220;The water doesn&#8217;t exactly cause the roof leaks but it certainly lets you know that they&#8217;re there. These are just roofs that need to be worked on or replaced,&#8221; said Murphy, adding that leaks tend to stem from clogged drainage systems.

Once a gutter or downspout becomes blocked, rainwater can dam up, producing standing water on a roof that sometimes finds its way to the inside of a building.

Perhaps the most significant water damage to a 48th Fighter Wing facility this summer was at RAF Feltwell&#8217;s Fire Station 3. Rainwater leaked through the roof, soaking ceiling tiles, carpet and mattresses in a bunk room, Murphy said.

Over the past month, trees surrounding the fire station have been pruned while its gutters were cleaned out and an overflow drainage system was expanded to prevent future roof leaks, he said.

Damage estimates for the fire station were not immediately available.

Other notable roof work done to on-base facilities this summer include the teen center, base exchange and an aerospace ground equipment building, he added.

Murphy stressed that roofs belonging to on-base facilities last a long time, but some problems can arise from flat roofs, as the one found at Eagle&#8217;s Landing. The roof, built almost 60 years ago, was reaching the end of its design life, he said.

Structural specialists from the squadron also inspect on-base facilities at least once a year, he said.