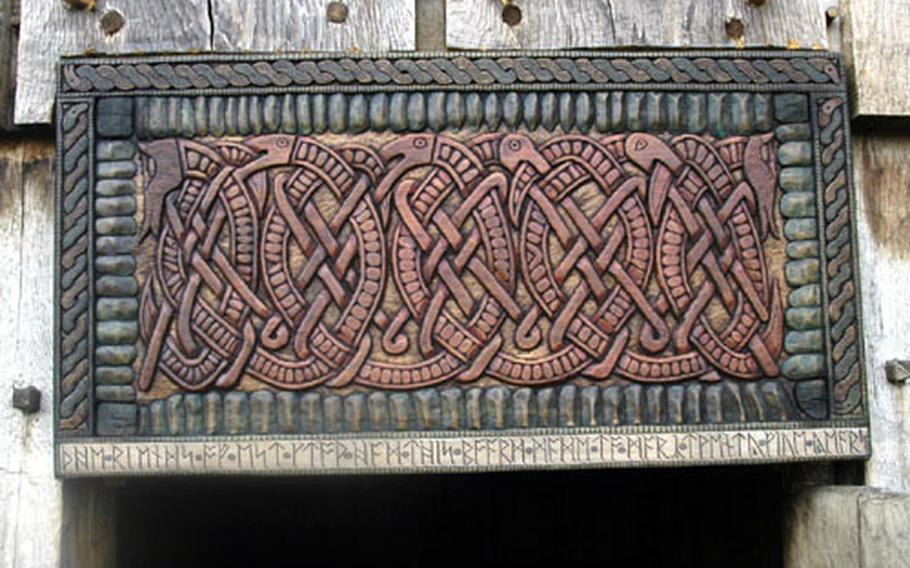 A re-created Anglo-Saxon piece of art sits above the door of one of the buildings at the West Stow Anglo-Saxon Village and County Park. (Jason Chudy / S&S)

A re-created Anglo-Saxon piece of art sits above the door of one of the buildings at the West Stow Anglo-Saxon Village and County Park. (Jason Chudy / S&S) 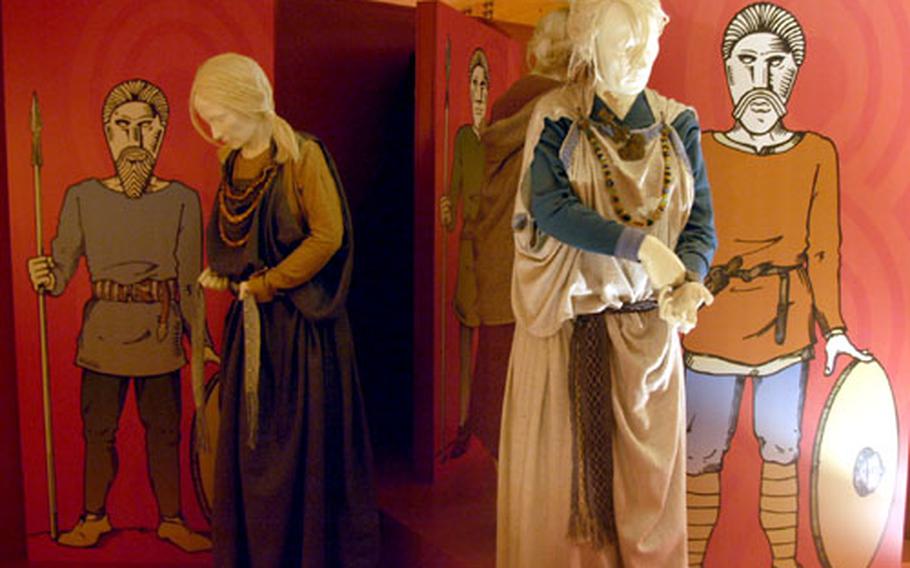 Mannequins are made up in what is believed to be traditional Anglo-Saxon clothing. (Jason Chudy / S&S) 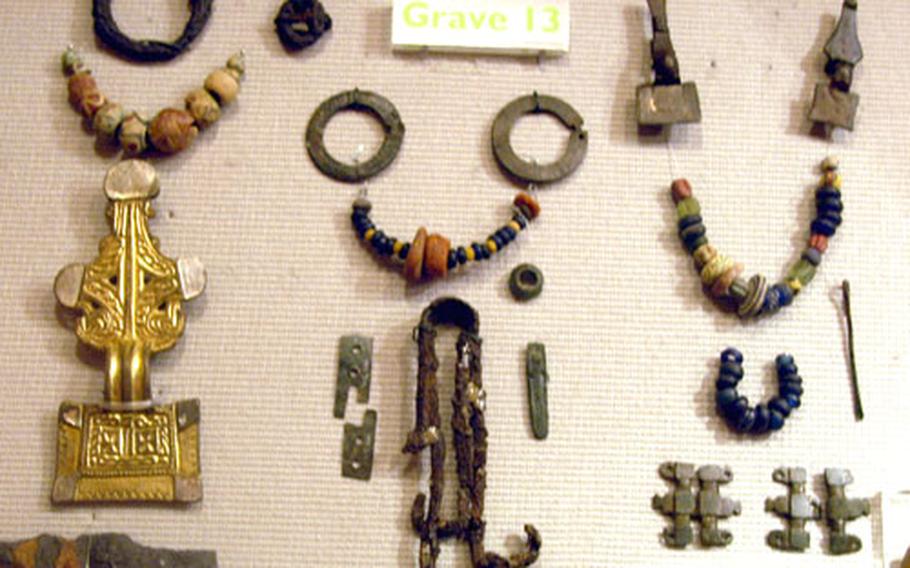 Some of the items found at the West Stow Anglo-Saxon Village and County Park over the past 150 years. (Jason Chudy / S&S) 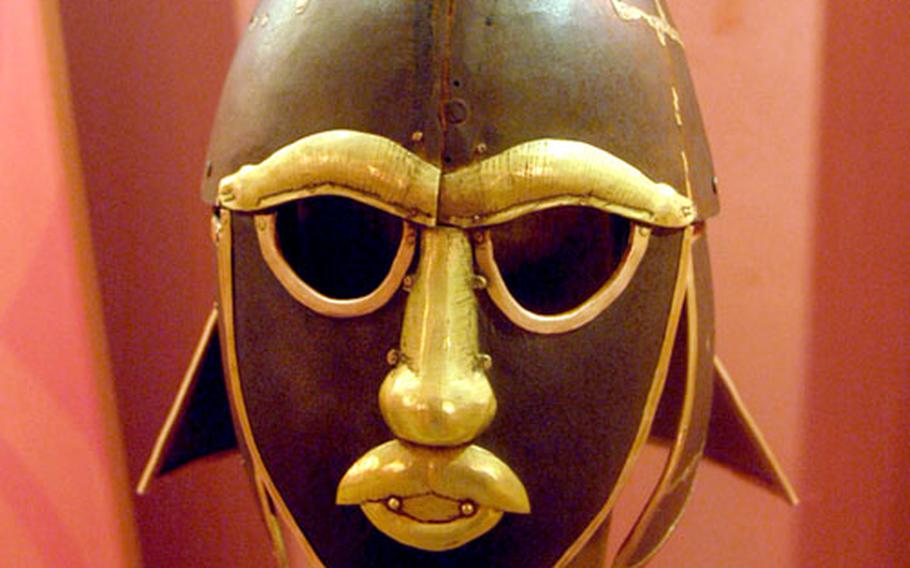 The museum at the West Stow Anglo Saxon Village and Country Park has a replica of a warrior&#39;s helmet that visitors can try on. (Jason Chudy / S&S)

WEST STOW &mdash; The village of Stowe is a place that holds onto the past with an iron grip.

For the handful of wooden buildings with thatched roofs that makes up Stowe is England&rsquo;s best reconstructed and most studied Anglo-Saxon village.

The West Stow Anglo-Saxon Village is about 20 minutes east of RAFs Mildenhall and Lakenheath on the Bury St. Edmunds road (A 1101).

The Anglo-Saxons were the original English; the name England means &ldquo;land of the Anglo.&rdquo; After the Romans left, the Anglo-Saxons came from northern Europe and settled, mixing with local tribes, farming and raising animals.

Stowe, which simply meant &ldquo;place&rdquo; in Old English, originally existed between about 420 and 650 A.D.

Researchers began excavating the site in the mid-1960s, but little was known about the construction of the buildings. As they worked, building foundations &mdash; nothing more than pits &mdash; and the remains of a burned-down house gave the researchers clues about the dwellings.

It wasn&rsquo;t until 1974 that the researchers tried to put their findings into practice, using the actual foundations from the original settlement. According to signs on the site, it&rsquo;s the only reconstructed settlement of this size in England and is also the most studied.

&ldquo;It&rsquo;s particularly important because of the kinds of buildings here,&rdquo; Baxter said. &ldquo;They&rsquo;re still not fully understood. The exact nature of these houses are very much debated.

&ldquo;Because the Romans built in stone, this gives us a lot of evidence [of their buildings],&rdquo; Baxter said. &ldquo;Anglo-Saxons were not like that &mdash; they built in wood.&rdquo;

Wood doesn&rsquo;t hold up as well as stone during nearly 2,000 years in the ground.

The first rebuilt structure tested the theory that floorboards sat over the pits. The next house was built with the pit at the floor.

The researchers now believe that their first building is more historically accurate, with remains of an Anglo-Saxon home in Ipswich showing more conclusive evidence that the underground areas were used for storage.

Since those two buildings were built, five more have been constructed. Anglo-Saxon villages, according to information presented at the site, were relatively small, with houses, a central community hall, workshops and weaving houses.

Researchers have found the foundations of 766 buildings on the site.

While the buildings are the key point of the reconstruction, researchers have added other features to round out the village itself.

Since villagers made their own storage vessels, the site has a clay reserve. There&rsquo;s also a handful of sheep, chickens and a large black pig that&rsquo;s being bred to more accurately represent pigs of that time.

Re-enactors come to the site for events throughout the year. An on-site museum is always open allowing visitors a good look into the daily lives of the Anglo-Saxons.

The museum doesn&rsquo;t rely on written texts or drawings to present the Anglo-Saxons&rsquo; lives, but rather actual objects found on the site or at a nearby Saxon graveyard discovered by workers in 1848. The small museum allows for a quick visit of less than 30 minutes, but its displays are presented in a bright and colorful, to-the-point manner that takes away a lot of the stuffiness of looking at bits and pieces of combs, jewelry and pottery.

How to travel back in time

The West Stow Anglo-Saxon Village is about 20 minutes east of RAFs Lakenheath and Mildenhall on the Bury St. Edmunds road (A 1101). The village and museum are open from 10 a.m. to 5 p.m. daily, although the last entry is at 3:30 p.m. in winter or 4 p.m. in summer.

Re-enactors &ldquo;inhabit&rdquo; the village during school breaks, on Easter weekend, bank holiday weekends and throughout August.

The site also is part of a 128-acre county park with two nature trails that offer bird and mammal watching.