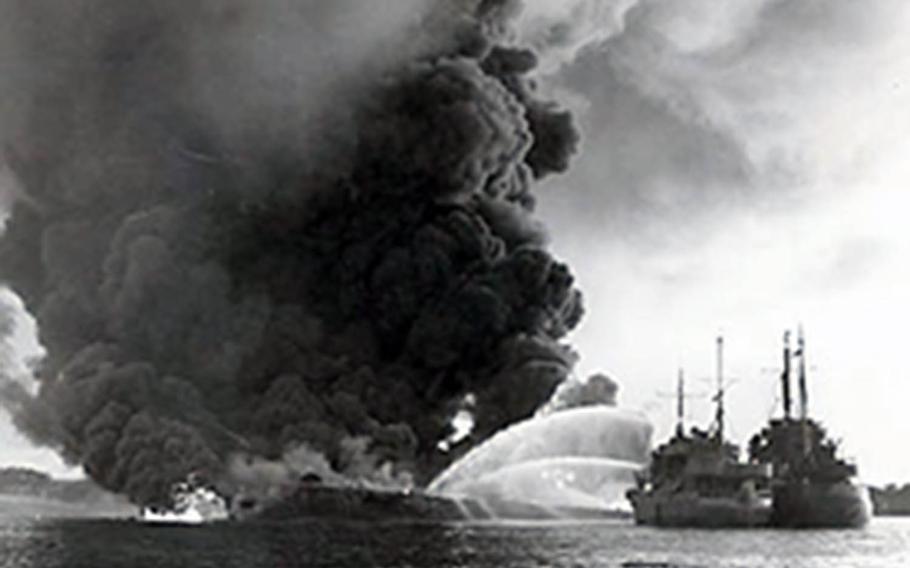 A U.S. Coast Guard photographer captured the aftermath of the catastrophic explosion at West Loch in Pearl Harbor, Hawaii, on May 21, 1944. (Courtesy National Park Service)

FORT SHAFTER, Hawaii — At age 20, Pfc. Noel Mercer fought with the first wave of Marines to hit the beaches of Tarawa in November 1943.

The flamethrower operator survived the bloody three-day battle, which killed more than 900 men with the 2nd Marine Division and left another 2,200 wounded.

Mercer was shipped back to Hawaii to train for the fights yet to come in the Pacific theater, but in a letter to his father he lamented that “if all these battles are like the one I just saw, I’m not sure how I can survive this war.”

Mercer never saw battle again, but he lost his life months later in a disaster that was shrouded in secrecy for years to come.

Seventy-five years ago, on May 21, 1944, a massive chain of explosions aboard ships berthed at West Loch in Pearl Harbor left hundreds of servicemembers and civilian workers dead or injured. The disaster has been dubbed by some as the “Second Pearl Harbor,” harking back to the surprise attack by the Japanese on Pearl Harbor that turned Battleship Row into a melee of fire, smoke and death.

On Tuesday, the Surface Navy Association, Afloat Training Group Middle Pacific and Joint Base Pearl Harbor-Hickam are commemorating the lives lost during a shipboard ceremony on the waters of West Loch. One survivor and family members of survivors are slated to attend.

In the hours before the explosions, Mercer had been standing guard aboard Landing Ship Tank, or LST, 179 berthed in West Loch as it was being loaded with ammunition, fuel and supplies. LST vessels were used to support amphibious operations by transporting tanks, cargo and troops to shores having no docks.

Twenty-nine LSTs were docked closely along six berths, with the bows of six to seven ships moored nose to nose, in a star shape called “nesting,” according to a Navy account of the disaster.

The close formation of the ships proved deadly. With crews of roughly 120 men, an LST carried about 90 drums of high-octane fuel in the forward hold, 6,000 cubic feet of ammunition stored on deck and the magazines for many other weapons stored throughout.

An initial blast is believed to have come from the bow of LST 963, where soldiers had been unloading mortar ammunition at about 3 p.m., but investigators were never able to pinpoint the origin because no witnesses survived the first blast.

Flaming shrapnel landed on the other LSTs, igniting gasoline drums, setting off a chain reaction of explosions that killed about 163 men, wounded another 396, sank six LSTs and damaged several more. The number of people killed is disputed to this day.

Mercer’s last day After the disaster, Mercer’s parents received a telegram that their son was missing in the South Pacific, said Dave Mercer, the Marine’s nephew. They were later notified that he was missing and presumed dead, Mercer said.

But shortly after the end of World War II, a few of Mercer’s friends from LST 179 visited his parents and talked of what they knew of his last day.

After standing guard as the ship was loaded that Sunday, Mercer was relieved of duty and went below deck to clean up with the intention of joining his friends during his time off.

“Shortly after he left them, the first explosion occurred on LST 353, which was rafted to their ship,” Dave Mercer said. “LST 179 blew up minutes later and burned for several hours, drifted into the channel, and sank. Noel’s friends never saw him again.”

The media was not allowed to report on the disaster — the territory of Hawaii was under martial law at that time — and the official inquiry was top secret until being declassified in the early 1960s.

Six LSTs sank, with others badly damaged or grounded. Today, the rusty hulk of LST 480 still pokes through the surface of Pearl Harbor.

Bodies that were too badly burned to be identified were buried in 36 gravesites in the National Memorial Cemetery of the Pacific, also called the Punchbowl cemetery, in Honolulu. The headstones originally carried only the simple inscription “Unknown,” but in recent years the wording was changed to “Unknown, West Loch Disaster, May 21, 1944.”

‘I want to go home now’ Noel Mercer’s body was never identified after the disaster, and Dave Mercer believes he might be lying beneath one of those unknown gravestones. His hope is that the remains will someday be exhumed and examined by the Defense POW/MIA Accounting Agency. He has already submitted a sample of his DNA for that day, should it ever come.

“His loss had a huge impact on our family,” the nephew said. “My grandmother never truly recovered from the loss of her youngest son. My grandfather, who was a caisson driver in World War I, didn’t talk much about Noel. He did let me shoot Noel’s prized Remington Model 11 shotgun and use his fly rod to play in the backyard.

“My father, Noel’s older brother, had enlisted in the Marines immediately following Pearl Harbor. Noel finished high school but was eager to follow his big brother’s path. My dad lived a very happy and productive life, but he was troubled by the loss.”

After retiring, Dave Mercer said his father and mother went to Hawaii on vacation, and toward the end of the stay made their way to the Punchbowl cemetery. They walked through the rows of marble slabs called the Courts of the Missing, where the names are inscribed of every servicemember not recovered in Pacific wars since WWII.

He found his brother’s name, Noel Mercer, then turned to his wife and said, “I want to go home now.”