Were GIs in fatal incidents afraid to get help while disobeying liberty rules? Roppongi Crossing, one of Tokyo's most popular landmarks amongst tourists and expatriates, is an intersection that divides one of the city's busiest entertainment disctricts into quarters.Servicemembers are prohibited from being here after midnight under the current curfew policy, but without a U.S. military presence on the streets, troops can party on without much fear. (Eric Guzman/Stars and Stripes)

Roppongi Crossing, one of Tokyo's most popular landmarks amongst tourists and expatriates, is an intersection that divides one of the city's busiest entertainment disctricts into quarters.Servicemembers are prohibited from being here after midnight under the current curfew policy, but without a U.S. military presence on the streets, troops can party on without much fear. (Eric Guzman/Stars and Stripes) 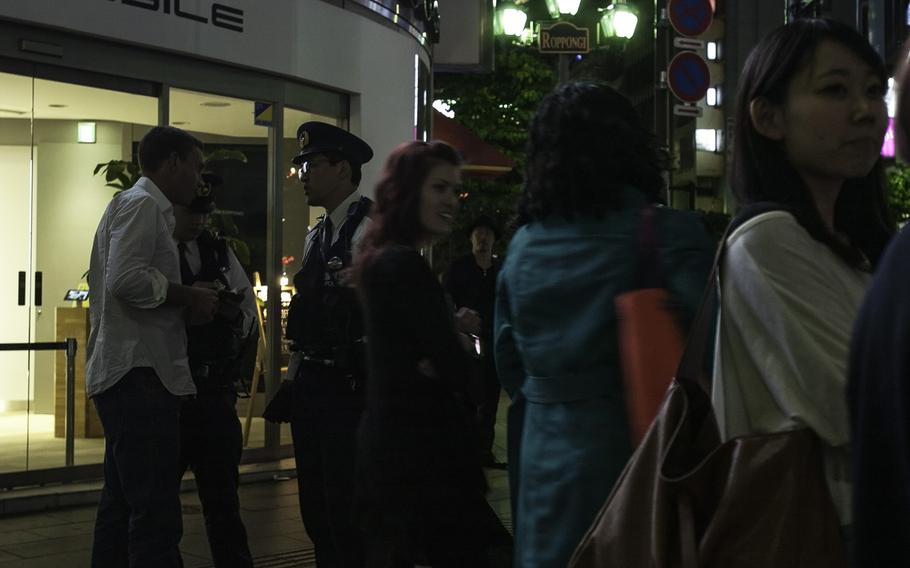 A strong law enforcement presence throughout Tokyo keeps late night incidents to a minimum. But Japanese police aren't responsible for enforcing the U.S. military curfew, so U.S. troops can party all night without much fear of being caught. (Eric Guzman/Stars and Stripes) 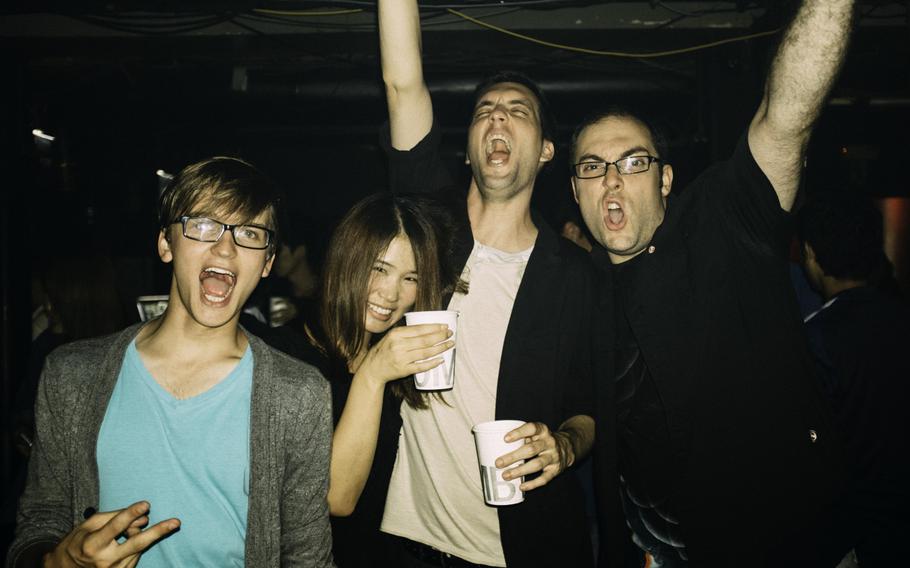 Gotta party early: Servicemembers below the rank of E-5 in Japan are not allowed to be off post after midnight due to curfew restrictions placed upon them after a string of incidents. (Eric Guzman/Stars and Stripes) 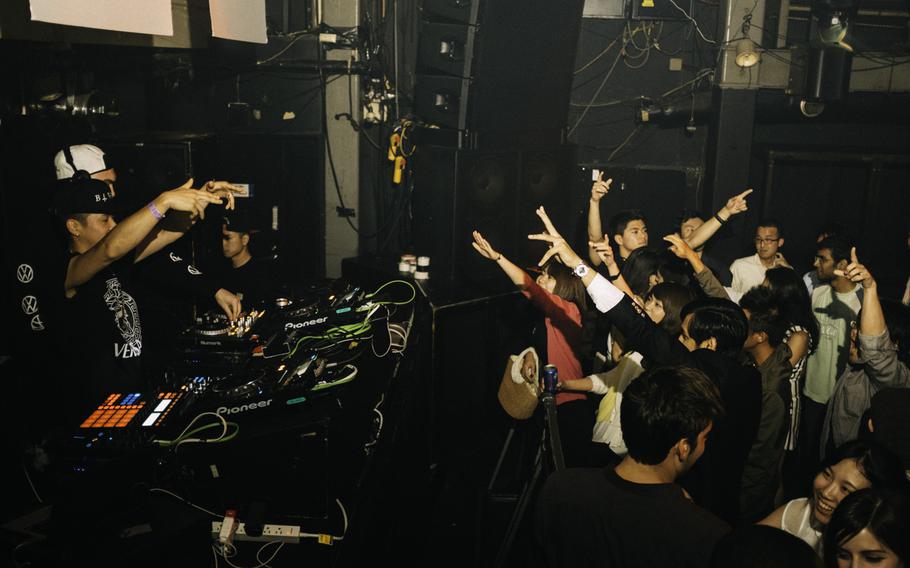 Servicemembers below the rank of E-5 in Japan need to get to the party early, because they are not allowed to be off post after midnight due to curfew restrictions placed upon them after a string of incidents. (Eric Guzman/Stars and Stripes)

YOKOTA AIR BASE, Japan — It’s Friday night, and curfew is looming for U.S. servicemembers across Japan and South Korea.

Some are sleeping, watching TV or playing video games. Some are partying on base or heading back to the barracks from nearby bars, perhaps sprinting to get to the gate on time or walking there unsteadily after one too many drinks.

Others are disregarding a liberty policy — which requires that they be back on base or in a private residence or hotel room between midnight and 5 a.m. — despite the risks to their careers and, perhaps, even their lives.

The curfew is wildly unpopular with young troops who complain that they are being treated like children and punished for something they didn’t do. A significant number defy the rules — moving their partying to off-base entertainment districts where they are unlikely to get caught after midnight.

The mixture of alcohol and unsupervised young servicemembers in a foreign country has risks. Twice since the late-night restrictions were imposed, it appears that the combination has led to a death; cases where friends didn’t seek medical help for those in dire need, possibly out of fear of getting in trouble themselves for being out too late.

In one case, Sasebo-based sailor Petty Officer 2nd Class David Lange, 26, fled while his friend, Petty Officer 2nd Class Samuel Lewis Stiles, 25, lay dying after falling from the roof of a train parked in a closed station after midnight. The pair had been “urban hiking” shortly after a curfew was imposed in October 2012 on U.S. servicemembers in Japan in response to the rape of an Okinawa woman by two visiting sailors.

In early May of this year, 20-year-old Army Spc. Carl A. Lissone died after a bar fight in Seoul that left him unconscious and bleeding from the mouth and ears. He died more than 10 hours later; his friends took him to a hotel instead of a hospital. The incident is still under investigation.

The incidents appear to be accidental fallout from curfews aimed at maintaining discipline and readiness or dealing with host-country sensitivities about the small percentage of servicemen who commit crimes off base.

Servicemembers at Yokota Air Base said that curfew violators could be reluctant to go to authorities.

Airman 1st Class Fred Camacho, 22, of Brooklyn, N.Y., said no one wants an alcohol-related incident on their record at a time when the military is cutting tens of thousands from its ranks.

“You have the choice of losing money and losing rank and, possibly, getting kicked out versus staying at a hotel and taking your chances,” he said.

Given those options, many servicemembers said they would go to a hotel rather than a hospital, he said.

Being good neighbors The liberty policies in Japan are credited with cutting off-base incidents, which shows the U.S. military is trying to play the part of a gracious guest in these foreign lands.

“While reducing misconduct rates is a positive outcome of the policy, the singular goal of the policy is to safeguard the vital relationship with our Japanese host nation and communities,” he said by email.

Additionally, U.S. Forces Korea spokesman Christopher Bush said the curfew in Korea — instituted in October 2011 — is being kept in place “in order for leaders to rapidly assemble their units and respond to any situation.”

“Leaders at all levels of USFK continually reiterate to servicemembers the importance of our very real mission in Korea,” Bush wrote in an email. Troops are also counseled by leaders regularly regarding safety and personal conduct. “We are all ambassadors in this country. Servicemembers have a personal and professional responsibility to adhere to the USFK curfew. They also have a moral and professional obligation to their ‘battle buddies,’ ” according to Bush’s email.

USFJ and USFK recognize that the vast majority of U.S. servicemembers in Japan act as great ambassadors, Bush and Honchul said.

As with all USFJ’s policies, the liberty rules are routinely evaluated to make sure they are appropriate and effective, Honchul said.

Partying far from base It’s well after midnight and the curfew has begun, but the night is still young for revelers — many of them U.S. servicemembers — at nightclubs in the Roppongi entertainment district of Tokyo. There are no military police or “courtesy patrols” here to worry about — or help out in an emergency — and most club owners aren’t going to ask questions of someone plunking down cash for a round of drinks.

The situation is similar in Seoul, where courtesy patrols in the Itaewon district near the Yongsan base have led some troops to head to other parts of the capital to party late.

Servicemembers who go drinking after curfew often go into a nightclub before midnight and stay inside until daybreak, when it’s safe to head back to base.

The ones partying in Roppongi were reluctant to talk to a reporter after midnight.

“Are you NCIS?” several asked, referring to the Naval Criminal Investigative Service.

One sailor drinking whiskey and cola with a large group of shipmates in a nightclub near Roppongi Crossing said he and his friends often stay out all night and don’t fear being caught as long as they keep away from U.S. bases.

Swedish tourist Josefin Svensson, 20, who was drinking alongside the servicemembers, said she’s met a lot of young sailors out after curfew.

Svensson said all of them had been friendly and that she felt safer going out in Tokyo than anywhere else she has lived.

“I have a friend who is in the U.S. Navy, and he can’t come out every night because he has to work,” she said. “When he can come out, he should be allowed to stay out late.”

Personnel at Yokota Air Base echoed the Roppongi revelers’ views.

Airman 1st Class Dominick Gutierrez, 22, of San Antonio, said it’s tough for young airmen to hear stories about how much fun their friends are having back home.

Senior Airman Kyle Smith, 22, of Cooper City, Fla., said he expects incidents to happen no matter what liberty policy is in place.

“I think the curfew is pointless right now,” he said.

Smith said he’s trying to explore Japan — he recently toured Kyoto — but that the liberty policy makes that complicated. If he wanted to watch the sunrise from the summit of Mount Fuji, which requires climbing at night, he’d need to fill out forms and get approval from a senior officer.

Airman 1st Class Ryan Alexander-Mansker, of Escondido, Calif., said when he goes to bars in Tokyo, he has to leave by 9 — about the time that most other people start their nights out in the city — so he can be back on base before midnight.

Stars and Stripes staffer Lisa Tourtelot contributed to this story.