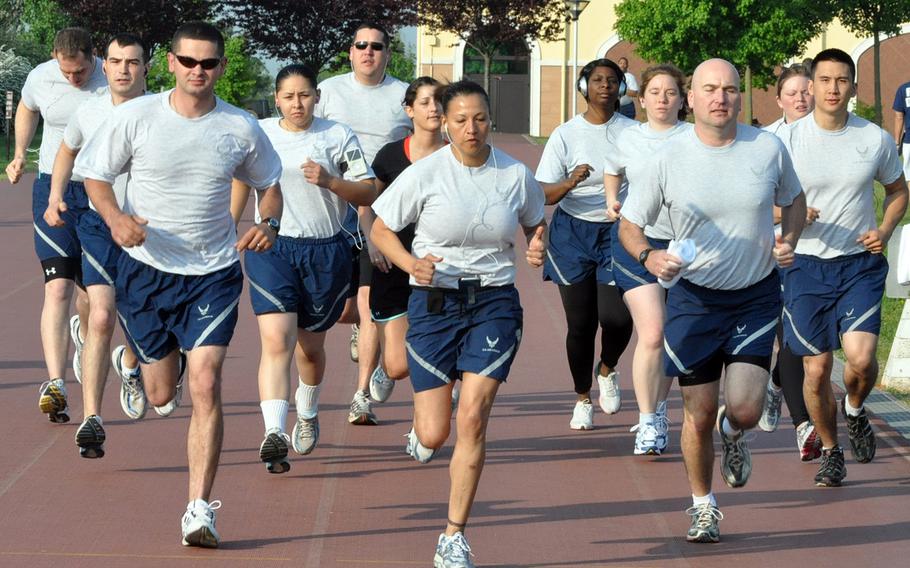 Airmen with the 31st Operations Support Squadron at Aviano Air Base in Italy begin a 1.5-mile run during physical fitness testing in 2010. (Kent Harris/Stars and Stripes)

Airmen with the 31st Operations Support Squadron at Aviano Air Base in Italy begin a 1.5-mile run during physical fitness testing in 2010. (Kent Harris/Stars and Stripes) 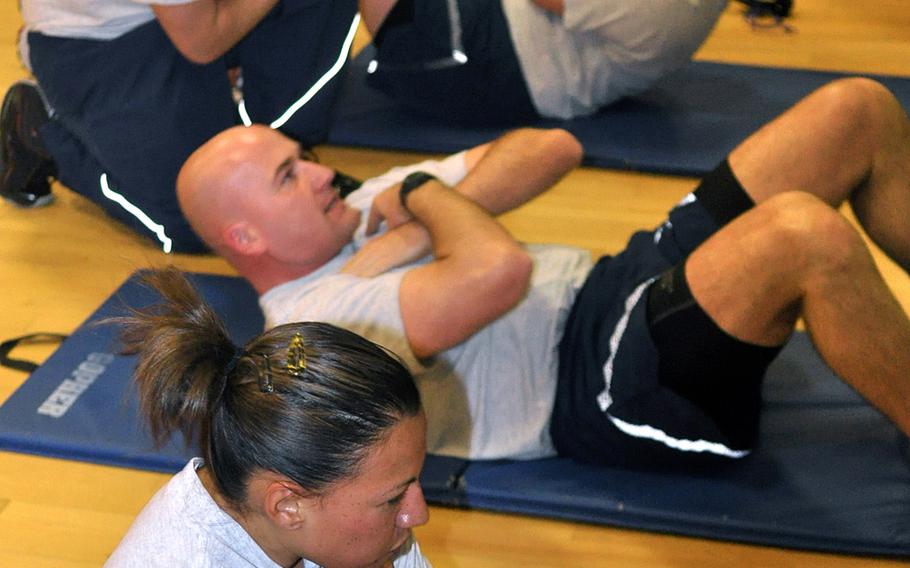 Airmen complete as many crunches as they can during physical fitness testing at the Dragon Fitness Center at Aviano Air Base in Italy in 2010. (Kent Harris/Stars and Stripes)

KAISERSLAUTERN, Germany — Since 2010, more than 30,000 airmen have failed the waist measurement portion of the Air Force fitness test.

That’s a lot of girth — but should abdominal size be tied to the service’s physical fitness assessment?

That answer is up to Air Force Chief of Staff Mark A. Welsh III, who’s considering recommendations from a team of experts appointed to review that very issue.

Chief Master Sgt. of the Air Force James Cody helped shape those recommendations. He noted during an interview in March — just two months into his job as the Air Force’s top enlisted leader — that reviewing the waist-measurement component of the Air Force physical fitness test was one of his priorities.

Airmen long have complained that the waist measurement is unfair because it puts airmen with larger body frames at a disadvantage, even if they can pass the other components of the test. More than 90 percent of airmen are passing the physical fitness test, but fitness-related discharges have skyrocketed in recent years.

Those discharges started to sharply rise in 2010, when the Air Force updated guidance to make airmen more accountable for their fitness, officials say. Changes included requiring a commander to make a recommendation for separation or retention when an airman fails the physical fitness test four times in a 24-month period, and requiring minimum scores for each component of the test, with failure to meet the minimum in any single component resulting in a failure.

But the Air Force has crunched the numbers and has found that the vast majority of airmen who fail the fitness assessment do so because of the run component of the test, accounting for 5.6 percent of failures since October 2010, followed by sit-ups.

Plenty have busted the tape measurement, too, which for men is more than 39 inches and for women more than 35.5 inches. A waist over the maximum allowed equals a failed fitness test, regardless of how many push-ups or sit-ups an airman can do or how fast he or she can run 1.5 miles.

Of the 1,277,826 airmen who have taken the physical fitness test since October 2010, a total of 30,174 have failed the waist-measurement component, according to Air Force figures. Of those, just more than half — 15,788 — completed all four components of the test and failed the waist measurement and at least one other component, said Air Force spokeswoman Lt. Col. Laurel Tingley.

A total of 5,141 airmen completed all four components, failing the waist measurement but passing the other three components. Within that total, 348 airmen passed the remaining components with a score of 75, which is well above the minimum that would have been required, Tingley said. An additional 9,785 airmen who took one or more portions of the test but not the complete test — most likely due to medical reasons — also failed the waist measurement, according to Air Force figures.

Air Force officials say they don’t know when Welsh will make a decision, but they expect any changes or updates to the program would go into effect starting Oct. 1.