Welsh known for his compassion for airmen 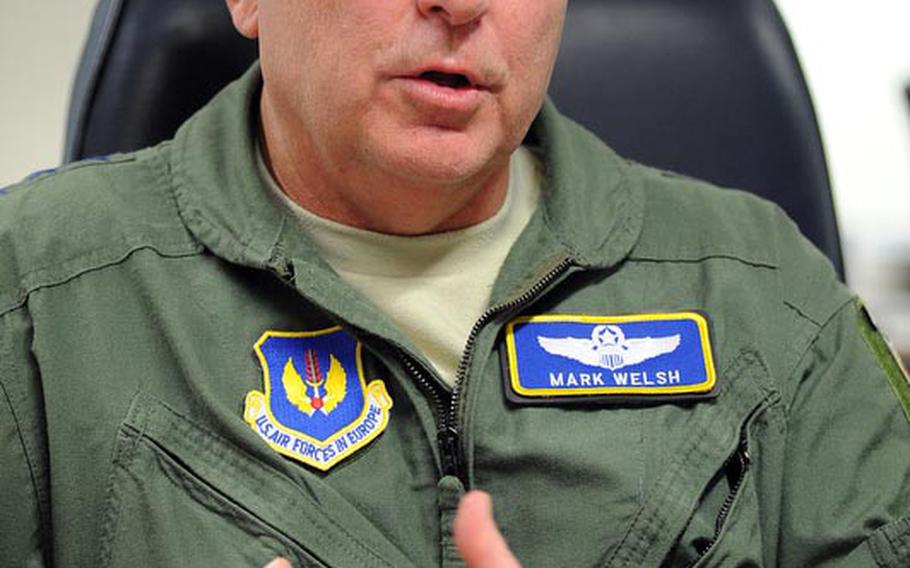 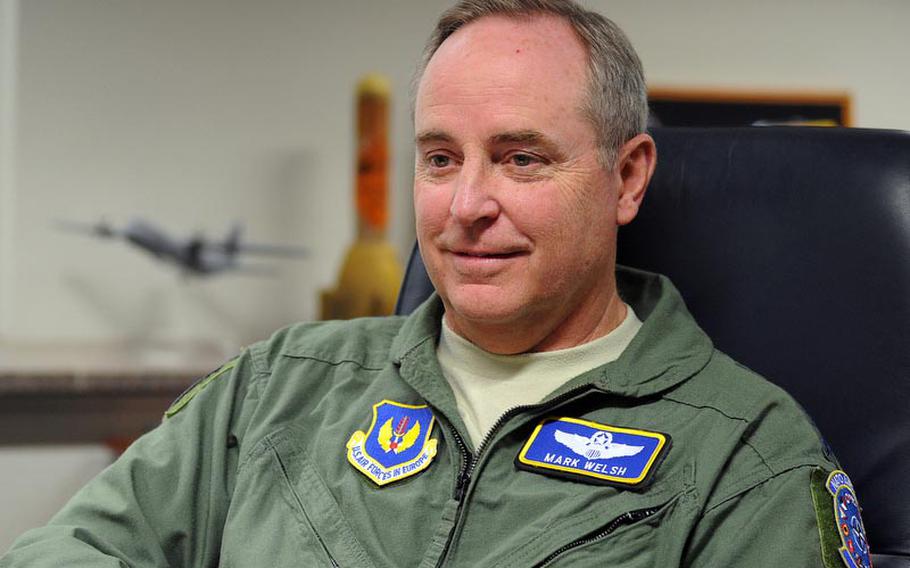 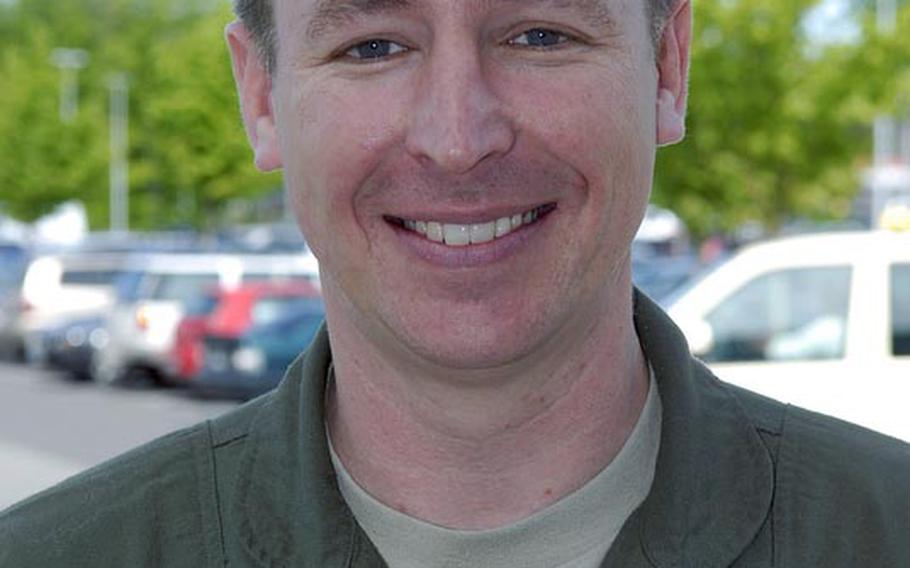 Lt. Col. Evan Pettus, who works for Mark A. Welsh III as the chief of the commander??s action group at U.S. Air Forces in Europe headquarters on Ramstein Air Base. (Jennifer H. Svan/Stars and Strip) 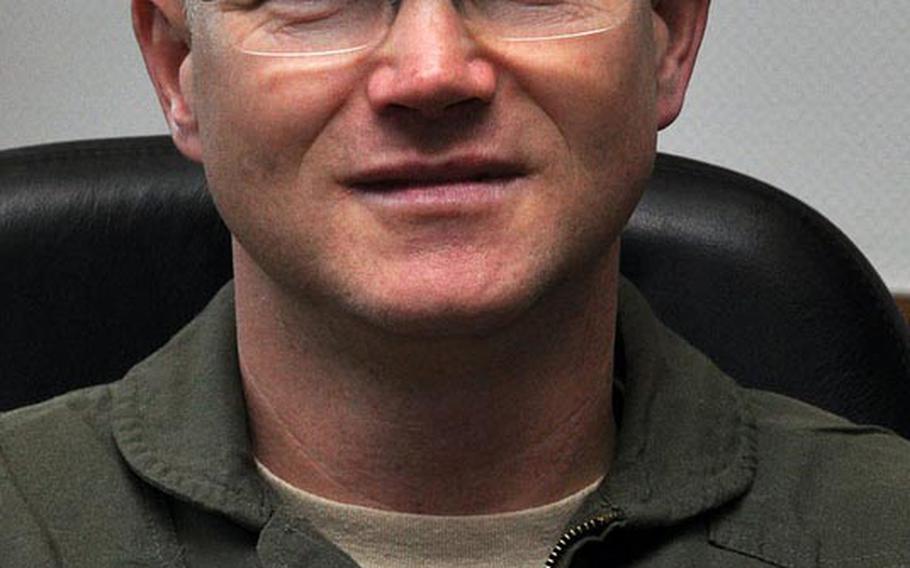 Col. Christopher Weggeman, commander of the 52nd Fighter Wing at Spangdahlem Air Base, Germany, has known Gen. Mark A. Welsh III since Weggeman, an F-16 pilot, was a first lieutenant at Hill Air Force Base, Utah. (Jennifer H. Svan/Stars and Strip) 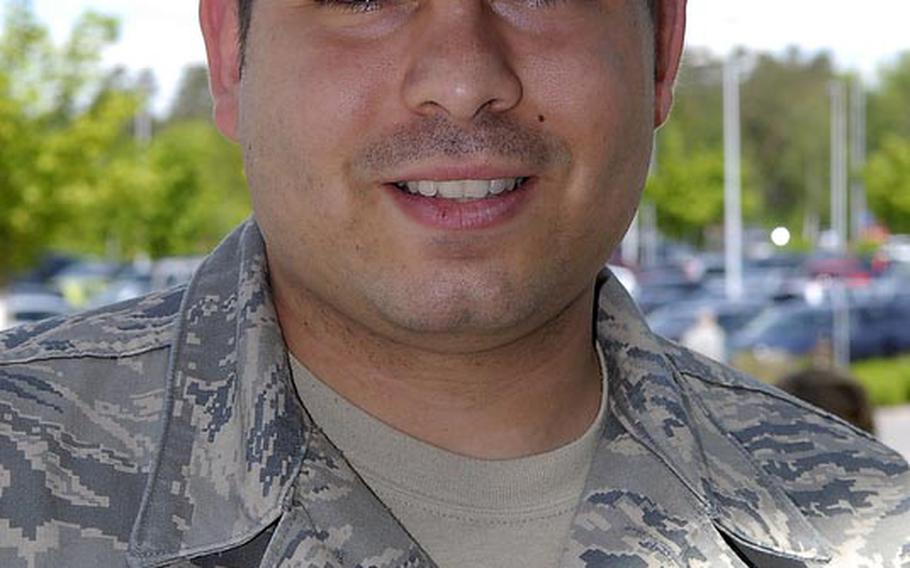 RAMSTEIN AIR BASE, Germany &mdash; The man tapped to be the next Air Force chief of staff is a brilliant strategist who inspires others to follow and shows a &ldquo;genuine compassion&rdquo; for airmen, regardless of rank, say those who know and have worked with him.

Gen. Mark A. Welsh III is one of those rare individuals whose emotional and intelligence quotients &ldquo;are both off the charts,&rdquo; said Col. Chris Weggeman, commander of the 52nd Fighter Wing at Spangdahlem Air Base.

&ldquo;He is as compassionate with his people as he is brilliant with his strategy,&rdquo; said Weggeman, who has known Welsh since Weggeman, an F-16 pilot, was a first lieutenant at Hill Air Force Base, Utah, and Welsh was director of operations for the 34th Tactical Fighter Squadron.

Defense Secretary Leon Panetta, announced Welsh&rsquo;s selection to replace Gen. Norton Schwartz, who retires this year. Panetta worked with Welsh in 2009 and 2010 at the CIA, where Welsh served as an associate director for military support.

&ldquo;Over the course of our time working together, I developed a deep appreciation for his wisdom and counsel,&rdquo; said Panetta, the former CIA director.

In a statement, Welsh said he was &ldquo;tremendously honored and deeply humbled&rdquo; to be nominated for the job. If approved by the Senate, Welsh, who currently commands U.S. Air Forces in Europe, would move into the role this summer.

Born in San Antonio, Welsh graduated from the Air Force Academy in 1976 and holds a master&rsquo;s degree in computer resource management, according to his Air Force biography. Welsh holds the rating of command pilot and has more than 3,400 flying hours, primarily in the F-16 Fighting Falcon and the A-10 Thunderbolt II.

In his current role as commander of USAFE and the NATO Air Component Command, Welsh oversees Air Force activities in an area that includes 51 countries in Europe, Asia and the Middle East.

His experience working with allies in Europe should come in handy as the new Air Force chief, particularly at a time when the military is looking for ways to work more efficiently, said Air Force Col. John Zazworsky, who now serves as a professor of international security studies at the George C. Marshall European Center for Security Studies in Garmisch, Germany.

In additon to understanding the value of alliances, the Air Force also will have a leader who has the common touch, Zazworsky said.

&ldquo;He has a genuine compassion for airmen of all ranks, which will always be there when he is making decisions,&rdquo; Zazworsky said.

Weggeman said of his former mentor: &ldquo;He makes you feel an emotion, which inspires you to act.&rdquo;

Afterward, when Welsh and Weggeman were back at Hill, Weggeman recalled a time when Welsh stood up at a pilots meeting and read from a World War II history book about a story of a heroic fighter pilot. Toward the end of the story, he would &ldquo;look to us and say &lsquo;do you know why so and so did this? He was a fighter pilot just like you&rsquo; &ndash; and he would point at you and say your call sign,&rdquo; Weggeman said. &ldquo;That&rsquo;s just an example of how he&rsquo;d get you inspired. He had us all just chomping at the bit. We would follow him to war at a moment&rsquo;s notice.&rdquo;

Welsh has made lasting impressions on people outside the Air Force, too. Dr. Kai Zacharowski, director of anesthesiology and critical care at University Hospital Frankfurt, got to know Welsh while caring for two of the airmen critically wounded in last year&rsquo;s shooting at the Frankfurt Airport in which two U.S. airmen were killed.

Welsh and his wife, Betty, &ldquo;stayed for hours, to not only comfort the two airmen but the families, making sure that everybody was looked after,&rdquo; Zacharowski said.

Over the course of the last year, Zacharowski has met with Welsh on five or six occasions, and every time, he&rsquo;s struck by how dedicated and honest Welsh comes across, the doctor said.

&ldquo;When I talk to several of his high-ranking officers, they all would die for him. They all were like, if anything were to happen to him, they must go first; they are very loyal to him,&rdquo; Zacharowski said.

Lt. Col. Evan Pettus, who works for Welsh as the chief of the commander&rsquo;s action group at USAFE headquarters, said Welsh is &ldquo;very focused on the people &ndash; people&rsquo;s stories and people&rsquo;s needs ... from the very bottom ranks all the way up to the top.&rdquo;

&ldquo;He can break down a complex problem, get to the heart of it and communicate that to his team.&rdquo;

He&rsquo;s rarely in the office, he said. One of his sayings is &ldquo;every airman has a story,&rdquo; and Welsh makes an effort to get to know his airmen&rsquo;s stories, Pettus said. If several individuals from a unit are having babies, he might say &ldquo;let&rsquo;s have a baby shower at my house;&rdquo; or, &ldquo;I heard some good things about that captain; I want to meet him.&rdquo;

In a speech he gave to cadets at the Air Force Academy last November that was posted on YouTube, Welsh said he believes &ldquo;leadership is a gift. It&rsquo;s given by those who follow. You have to be worthy of it.&rdquo;

Staff Sgt. Anthony Santiago, 28, met Welsh once last year, after he volunteered during an Air Force conference at Ramstein.

After the visitors left, Welsh shook hands with the volunteers, Santiago said. &ldquo;He seemed pretty cool, down to earth; normal,&rdquo; he said. &ldquo;He didn&rsquo;t stick behind the uniform like most people do of that rank. He seemed more human than a general.&rdquo;