Welcoming home their loved ones 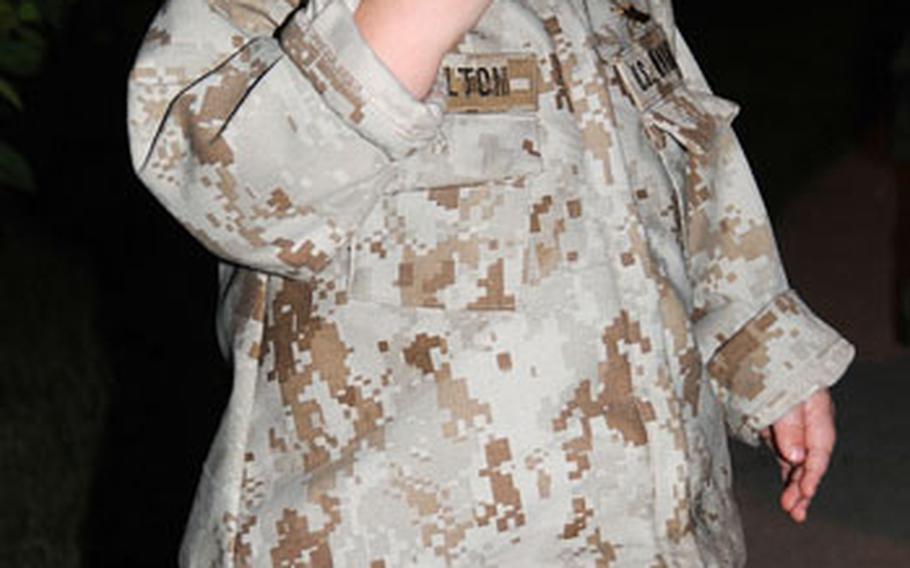 Isabella Charlton, 14 months, wears a uniform made from the pants of her father Staff Sgt. Chad Charlton’s uniforms in honor of his return to Camp Schwab, Okinawa. (Photo by Cindy Fisher/S&S)

CAMP SCHWAB, Okinawa &#8212; Families and loved ones gathered Thursday evening at Camp Schwab to see their Marines for the first time in seven months.

This deployment was hard for Natalie Kinkade.

Even though husband 1st Lt. Kevin Kinkade has spent most of the couple&#8217;s two years of marriage away at military school and exercises, she said, this was his first time in the war zone.

The long wait was scary, but she was comforted that he was in Iraq and not Afghanistan, she said.

"I heard worse things about Afghanistan than Iraq," she said. "So I was kind of glad he was going to Iraq."

When Staff Sgt. Chad Charlton meets his family, he will find that his youngest daughter truly does wear the pants in the family, his wife, Glenda Charlton, said.

Fourteen-month-old Isabella Charlton donned a camouflage uniform that a family friend made from a pair of her father&#8217;s cammie pants.

Chad has seen pictures of his youngest &#8212; the couple also has three teenagers &#8212; and he made her a video in which he reads a book. But Glenda was a little concerned that Isabella wouldn&#8217;t remember her father.

"I hope when she sees the uniform it will bring back memories," she said.

Hannah, 13, and Sarah Parkhurst, 9, eagerly waited with yellow roses to give to their father, Gunnery Sgt. Timothy Parkhurst.

"We found out that the color yellow in roses mean you care and joy and happiness," Sarah said.

The two have missed their father and say it&#8217;s been hard on their mother, Leony.

Hannah said their mom has had to do a lot by herself &#8212; taking them to doctor&#8217;s appointments, school visits and just "having to take care of all of us."

Leony said it was a really good bonding experience.

But now that their dad is back, the girls look forward to a missed treat: pancakes.

Those are their father&#8217;s specialty, her daughters said.

"He only makes them on weekends" and makes them in Mickey Mouse and other special shapes, Hannah said.

The snowman pancakes are good, too, Sarah added.

The girls are also looking forward to piggy-back rides, grill-outs and just spending time with their dad.

As the wife of battalion Sgt. Maj. Kenneth C. Pickering, Mady Pickering found herself taking on a leadership role while the unit was deployed.

She is the unit&#8217;s Key Volunteer Network coordinator and was there to provide support through the tough times, such as when one Marine was killed, leaving a young pregnant widow behind.

Most of the deployment had seemed easy, but the death made families realize danger still lurks, she said.

"It could be one of us at any moment," she said.

Being part of KVN helped her through the deployment.

"It puts a little more work on you," she said, "but it keeps you together."

The network volunteers provide that link between the command and the families, and ensure everyone is taken care of, Mady said.

"If something happens, you have someone to call," she said.