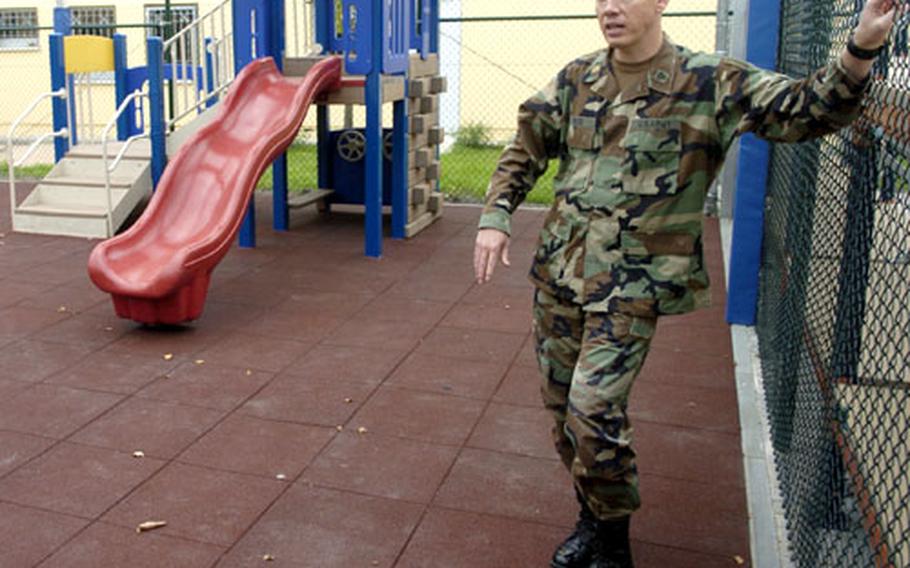 HANAU, Germany &#8212; The folks who assist soldiers and family members when they first arrive in Europe are on the move themselves.

With the closure of Rhein-Main Air Base, Germany, just weeks away, the 64th Replacement Company is now in the process of moving to nearby Hanau. The new facility starts receiving customers Sept. 6.

&#8220;Our aim is to get them processed and on that bus to their final destination,&#8221; said Maj. Jerry Wood, the company commander.

The move hasn&#8217;t been without its challenges.

For starters, the convenience of Rhein-Main can&#8217;t be replicated. Adjacent to Frankfurt International Airport, the air base was ridiculously convenient for troops and family members.

New arrivals will now have to take a half-hour bus ride from Frankfurt to Hanau, something Wood believes will be offset by a $4.8 million upgrade to Pioneer Casern that includes better amenities for transient personnel.

&#8220;The improvement [compared to] Rhein-Main cannot be overstated,&#8221; Wood said as he toured the new facility Monday.

The Army alone spent $3 million on the unit&#8217;s new digs, which include a headquarters building, operations center and billeting for unaccompanied personnel as well as families. There will be 150 rooms for unaccompanied soldiers and 16 apartments with either two or three bedrooms for families.

Perhaps the most notable upgrade from Rhein-Main to Hanau will be the processing center, which boasts a large meeting room, play areas for kids, luggage racks and a separate, fenced-in area for dogs and other pets.

The pet area, Wood said, includes an outdoor area where families &#8220;can expeditiously clean up after their four-legged children.&#8221;

There also will be a computer room with six Internet hook-ups, so that families can e-mail relatives and friends back home to confirm their arrival.

Incoming soldiers typically need a couple of hours to check in, so the Army felt it needed to make those first hours in country as manageable and as carefree as possible, especially for kids and pets. Leaving troops and their families with a good first impression will pay dividends later, Wood said.

But despite the move, the unit will continue to have teams of individuals at Frankfurt International Airport to greet and shepherd the newcomers once they arrive. Shuttle buses will run between Frankfurt and Hanau every 30 minutes.

Wood estimates the unit will receive 19,000 people in fiscal 2005. Last year, about 24,000 passed through their hands. The drop is a reflection of the current restructuring of U.S. forces overseas, Wood said.

In addition to welcoming newcomers, the 64th Replacement Company also handles personnel movements, from hospital transfers to rest and recuperation travel for those servicemembers fighting in Afghanistan or Iraq. It also is devoting more of its resources to Ramstein Air Base, which has supplanted Rhein-Main as the air logistics hub.