Welcome to the jungle: Surviving the "E Course" on Okinawa 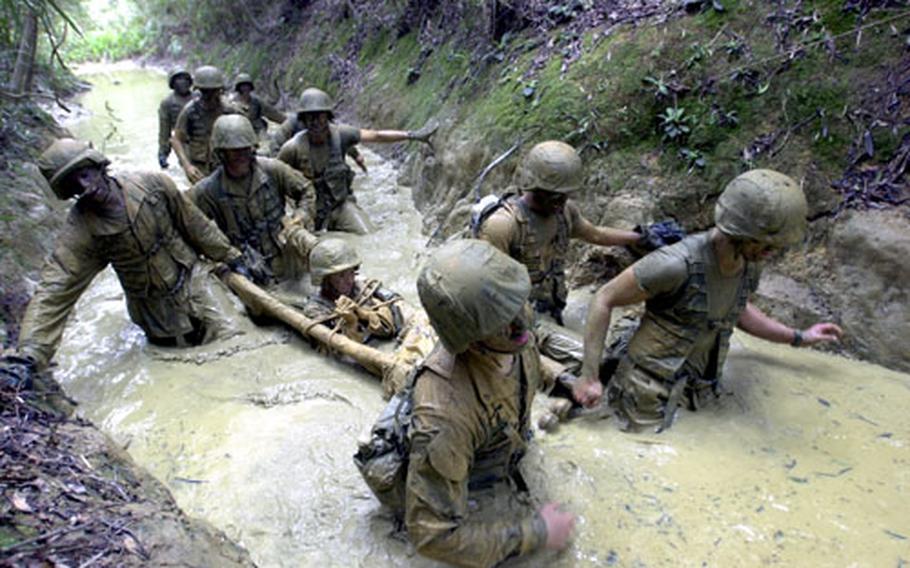 Jungle Warfare Training Center participants struggle to carry a “casualty” through the thick “peanut butter” mud Friday on the JWTC endurance course in northern Okinawa. The course is 3.8 miles long and has 37 obstacles and 14 rappels down cliffs. (Fred Zimmerman / S&S)

Jungle Warfare Training Center participants struggle to carry a “casualty” through the thick “peanut butter” mud Friday on the JWTC endurance course in northern Okinawa. The course is 3.8 miles long and has 37 obstacles and 14 rappels down cliffs. (Fred Zimmerman / S&S) 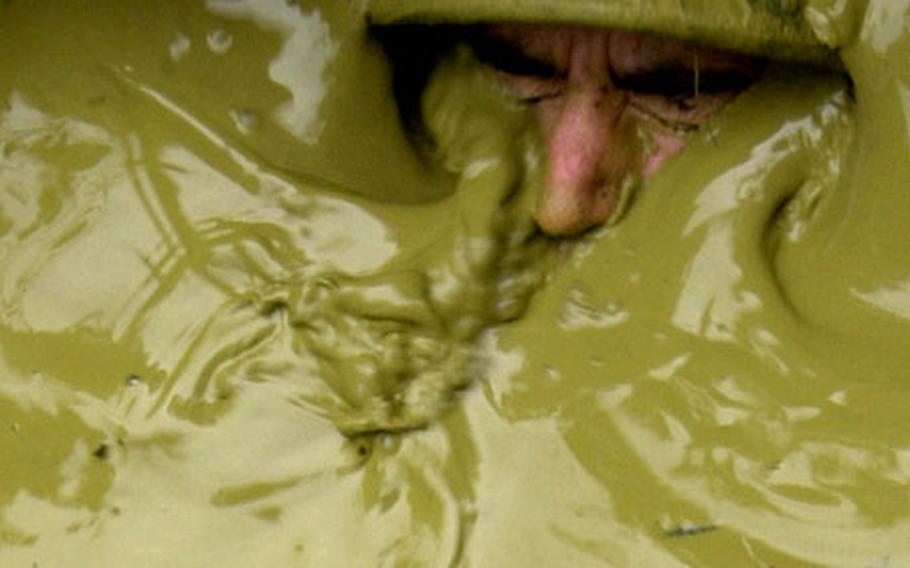 To navigate the “pit ‘n’ pond” obstacle, troops go under a log by fully submerging themselves in a pool of mud. (Fred Zimmerman / S&S) 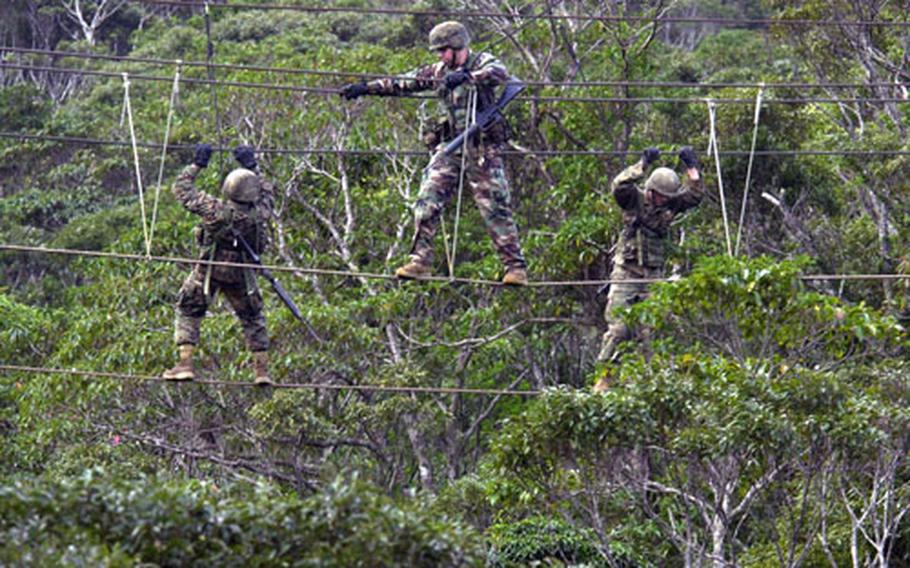 As one member crosses a ravine using a three-strand rope bridge, two teammates head the opposite direction. (Fred Zimmerman / S&S) 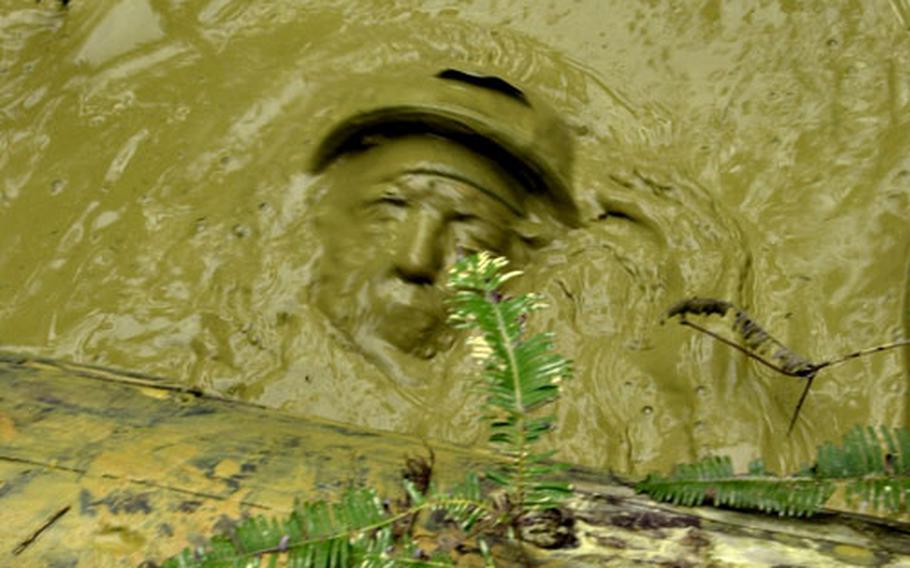 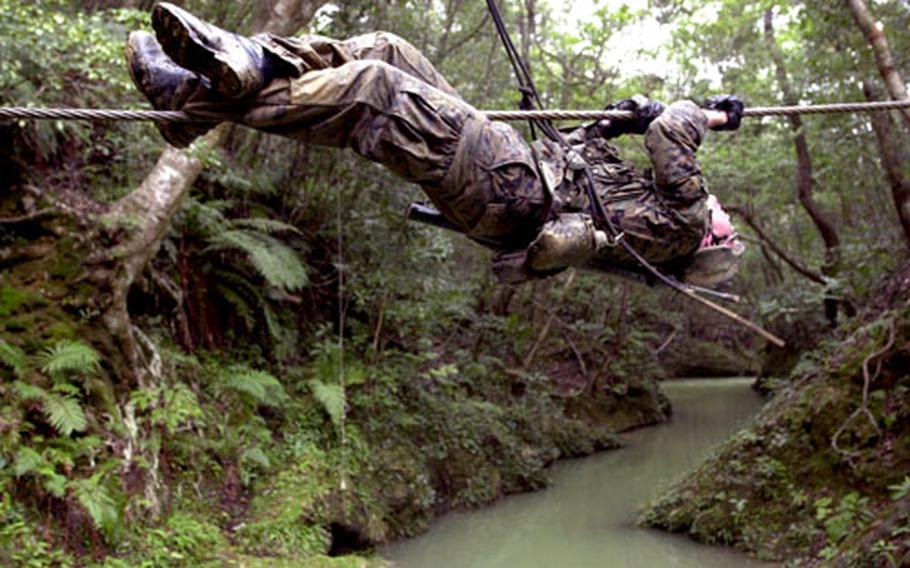 The “monkey crawl,” tests course participants’ ability to span a creek by inching across a suspended rope. (Fred Zimmerman / S&S)

The Marines stay low, blowing mud bubbles with their noses. They reach a series of ditches and crawl single-file on their elbows through the length of a very narrow, crooked football field.

The ditches converge, revealing barbed wire above and a log blocking the way through the rest of the muck. They submerge for a few seconds, then reemerge to untangle themselves from the wire.

The &#8220;E Course&#8221; at the Jungle Warfare Training Center tests ability and teamwork like few other training courses can &#8212; as 202 Marines, Navy Seabees and others found out Friday.

The 3.8-mile course features 14 rappels down slippery, craggy hills and a host of unusual challenges designed to keep would-be conquerors mentally and physically strained for hours.

Throughout the weeklong training, the servicemembers split time between the classroom and the jungle. While at their desks, they learn about the habu snakes and poisonous plants they might encounter. In the field, they learn controlled falling and how to react to ambushes, among other things.

Instructors fire clay &#8220;assessment rounds&#8221; at ambushed teams, aiming at staff NCOs to see who will emerge from the lower ranks to take control in the midst of the chaos.

Already confident in his senior NCOs, Gunnery Sgt. William Furness of Marine Air Support Squadron 2 said he learned a lot about the rest of his team from the exercises.

&#8220;It&#8217;s a big difference leading Marines in the field in an inherently dangerous situation. Out here is where it really counts.&#8221;

The teams shrug off pain and minor sprains. More serious injuries get attention from Petty Officer 1st Class Ian Crow and two junior corpsman. Staff instructors and other NCOs keep a sharp eye on each of the course&#8217;s 37 obstacles, watching for broken limbs and hypothermia.

Teams carry one of their own on a thin tarp stitched to two wooden poles through a river of waist-deep mud the consistency of &#8212; you guessed it &#8212; peanut butter.

Once free of the mud, they carry the stretcher up a mountain, over steep rocks and through gaps in trees.

On Friday afternoon, the fastest team made it in just over four hours. That is about average, although infantry units generally finish a little quicker, Thomas said.

A reconnaissance team once made it through the course in one hour, 29 minutes, he said. Thomas also remembers a dental team that needed more than nine hours.

Once finished, an instructor hoses off the exhausted teams with the gentle touch of a prison warden. It doesn&#8217;t much matter; everyone is smiling, shouting and congratulating each other on a job well done.