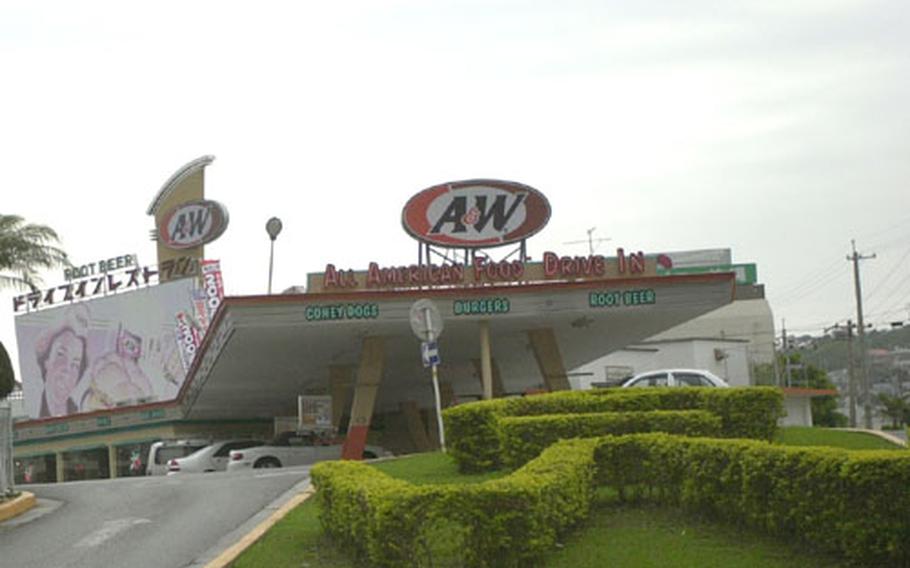 There are 22 A&W outlets throughout Okinawa, like this one in Urasoe where city residents are being urged to lose weight gained from years of adopting American eating habits. (Fred Zimmerman / S&S)

It&#8217;s all part of his city&#8217;s program to promote good eating and exercise habits and lose the extra pounds gained after decades of embracing American fast food.

Dining habits adopted after 27 years of American rule following World War II are changing the face &#8212; or perhaps tummy &#8212; of Okinawa. Okinawan men, once among Japan&#8217;s longest-lived, now are way down &#8212; or weighed down &#8212; in the middle of the country&#8217;s 47 prefectures. And although Okinawa women still live longer than their mainland sisters, their waistlines also are expanding.

The statistics show that with an average height of 5-foot-2, Okinawans are shorter than most Japanese but also are the Land of the Rising Sun&#8217;s pudgiest people.

Now, 22 A&W outlets spread throughout Okinawa, including the outer islands of Miyako and Ishigaki. Many still offer curb-side service, something abandoned decades ago in most of the United States.

The first one opened in Kitanakagusuku, near Camp Foster, in 1963, where it still operates, looking like a 1950s postcard from California. Other American chains opened after the prefecture reverted to Japanese rule in 1972, further whetting Okinawan appetites for fast food. The first McDonald&#8217;s opened in Urasoe&#8217;s Makiminato district in 1976.

&#8220;The average age of a citizen of Urasoe is 35 years old, the nation&#8217;s youngest,&#8221; said the mayor. &#8220;However, the degree of obesity on Okinawa is the highest, meaning we have the highest potential of succumbing to diseases related to an unhealthy lifestyle.

&#8220;If nothing is done, the destiny of these overweight people is diabetes, high blood pressure and heart attacks,&#8221; he said. &#8220;Obesity may be a personal matter; however, it is also a serious social concern because it can affect medical costs, and increases pressure on the city&#8217;s finances.&#8221;

The mayor said his own illness in October triggered the city&#8217;s anti-fat campaign.

&#8220;I suffered from acute pancreatitis and stayed in a hospital for 15 days,&#8221; he said, adding that he was told overeating and drinking alcohol caused the illness.

&#8220;I told my staff about my plan the first time I went to the office after being released from the hospital,&#8221; he said. &#8220;They told me they discussed the issue of unhealthy diets and lifestyles while I was away. No further discussion or preparation was necessary to put this campaign in motion.&#8221;

He said he receives encouragement wherever he goes in Urasoe, especially from women.

&#8220;They talk to me, announcing their determination to achieve the three-kilogram goal,&#8221; he said. &#8220;I changed my lifestyle, cutting my old bad habits. Now I am beginning to feel the joy and blessing of good health.

That one of every two men in Urasoe is overweight was a wake-up call, said Dr. Tomoichiro Kuda, Urasoe General Hospital Physical Examination Center director. &#8220;About 50 percent of men in the city have a body-mass index &#8212; the degree of obesity &#8212; higher than what is considered healthy.

&#8220;If people who are overweight can lose three to five kilograms (6.6 to 11 pounds), about 70 percent of their health problems will disappear,&#8221; said Kuda, a medical adviser for the weight loss campaign.

The city&#8217;s goal is to have people lose three to five kilograms within the next two years.

Dr. Makoko Suzuki, co-author of the best-selling &#8220;The Okinawa Program: How the World&#8217;s Longest Lived People Achieved Everlasting Health,&#8221; said he saw the island&#8217;s health problem emerging years ago. His 25-year study of the traditional Okinawa diet, co-written with two Canadian researchers, showed the island has more people per capita over the age of 100 than any other place in the world &#8212; all due to their diet, exercise and low-stress lifestyle.

But as Okinawa emerged into the new millennium, a more hectic fast-food lifestyle combined with a car culture changed the landscape. &#8220;A wide gap in the health between generations ... grows wider each year,&#8221; Suzuki said.

Interviewed recently at Okinawa International University, where he is professor of human welfare, Suzuki said the problem is progressing more rapidly than he thought at first.

He said the island&#8217;s claim as a haven for centenarians comes solely from an old island lifestyle that literally is dying out. He added that diseases associated with obesity &#8212; diabetes, heart failure and strokes &#8212; once rare on Okinawa, are becoming all too common.

Another factor is lack of exercise. While older Okinawans still take early morning and late evening walks, younger islanders &#8220;have the tendency to hop into a car&#8221; to travel &#8220;even short distances.&#8221;

&#8220;The last two factors are the loss of the Okinawan culture and tradition in our everyday lives,&#8221; he said. &#8220;Traditionally, Okinawans were more involved with their community and religious activities, which kept them active.&#8221;

He also blamed the adoption of American eating habits.

&#8220;The number of fast food restaurants per capita in Okinawa is higher than any other part of Japan,&#8221; Suzuki said. &#8220;Children who grew up eating food from fast food restaurants acquired the taste and they are now in their 30s, 40s and even their 50s and they have handed down their food preferences to their children.&#8221;

Suzuki shook his head. &#8220;A&W, McDonald&#8217;s, Kentucky Fried Chicken, there are all kinds of fast food restaurants here. They are undeniably good, inexpensive and convenient,&#8221; he said.

And, he added, unhealthy.

He mentioned Seiryu Toguchi, a 103-year-old man who lives in Motobu by himself. Suzuki said Toguchi cooks, tends to his farm daily and plays the sanshin, the Okinawan three-string banjo. Suzuki recently co-authored Toguchi&#8217;s autobiography, &#8220;A 100-year-old Robinson Crusoe.&#8221;

He moved to Okinawa to teach at the University of the Ryukyus, shortly after the prefecture reverted to Japan. At 70, he still teaches seven classes a week at Okinawa International University and moonlights as a doctor at a local company&#8217;s clinic.