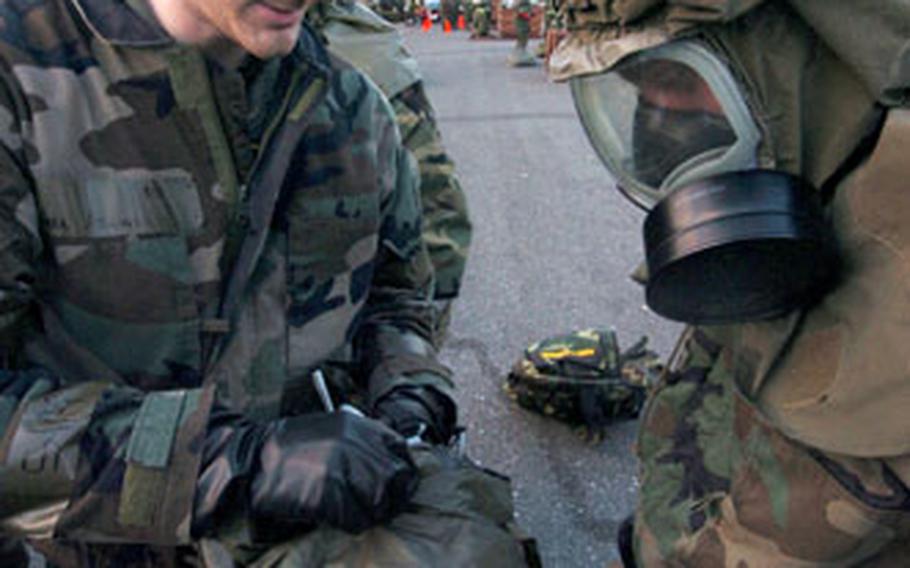 1st Lt. Will Atkins and Staff Sgt. Jason Bremer decontaminate their gear during a readiness exercise at Yokota Air Base, Japan, on Thursday. (Christopher B. Stoltz / S&S)

1st Lt. Will Atkins and Staff Sgt. Jason Bremer decontaminate their gear during a readiness exercise at Yokota Air Base, Japan, on Thursday. (Christopher B. Stoltz / S&S) 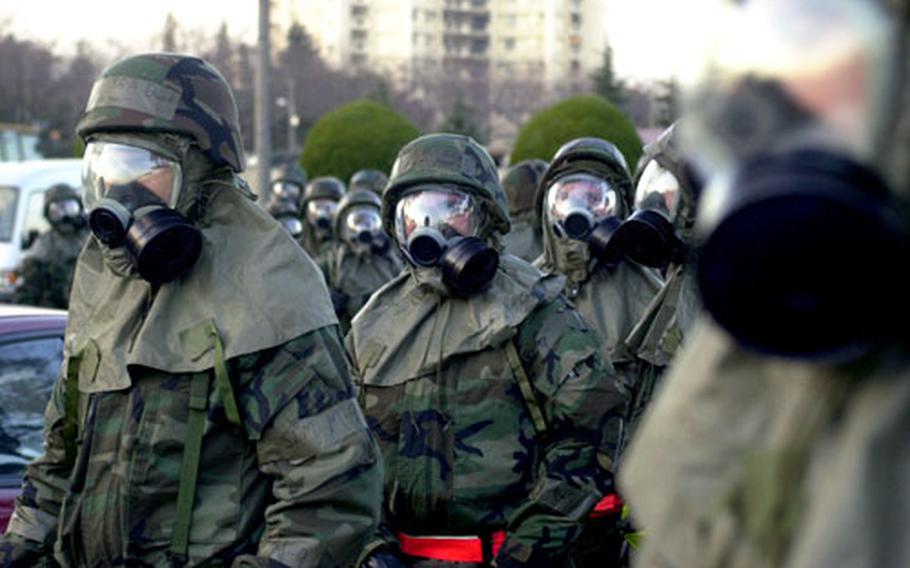 Yokota airmen wait to decontaminate themselves during the readiness exercise. (Christopher B. Stoltz / S&S) 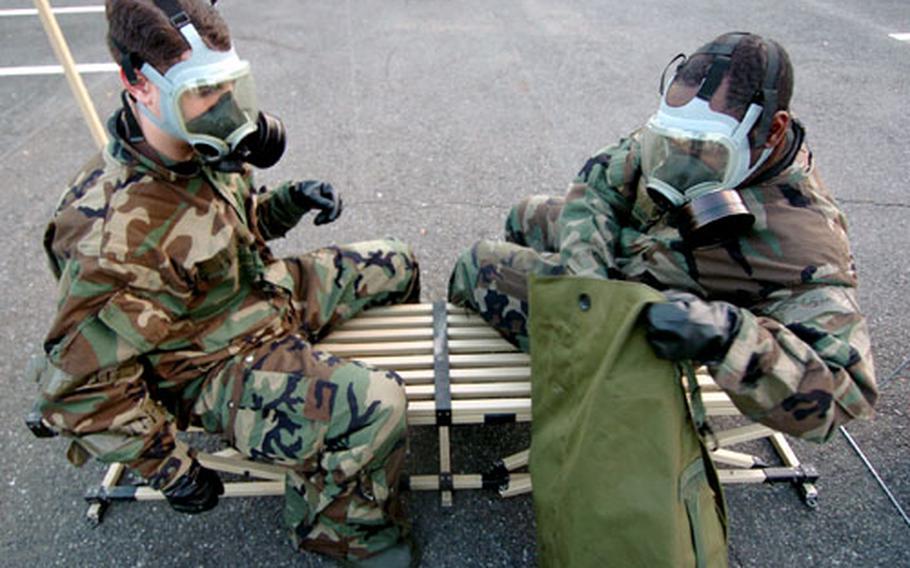 Senior Airman Jeremiah McCann and Staff Sgt. Galen Cargile help each other out of their boots. (Christopher B. Stoltz / S&S)

YOKOTA AIR BASE, Japan &#8212; Yokota airmen wrapped up an intensive, weeklong Operational Readiness Exercise on Friday, drawing praise from base leadership and solidifying their preparation for 2006&#8217;s major inspection by Pacific Air Forces.

More than 3,000 troops practiced moving personnel and cargo while testing their ability to survive and operate under a constant threat of attack. They got into full mission-oriented protective posture gear, or MOPP, and occasionally had to negotiate decontamination lines while proceeding around the base.

Early in the week, some airmen went through a two-day course on combat skills and convoy-ambush survival tactics designed to groom them for deployments to hot spots such as Iraq and Afghanistan. A team of former military members from an organization called the Advancing National Strategies and Enabling Results conducted the training.

The exercise was interrupted briefly by an actual emergency Wednesday night when an abandoned building on Airlift Avenue went up in flames. The Yokota Fire Department spent more than three hours getting the blaze under control.

&#8220;Our airmen performed quite well this week,&#8221; said Col. William Davidson, the 374th Airlift Wing inspector general, whose team was responsible for scripting the drill&#8217;s simulations. &#8220;Despite the complex scenario with its many distractions and problems, airmen successfully accomplished the wing&#8217;s mission. A positive attitude combined with some specialized training in November clearly paid big dividends in this exercise.&#8221;

The wing performed numerous functions during the ORE, he said.

At the outset, airmen practiced moving noncombatants and deployed personnel while dealing with staged bomb threats and robberies. In the second phase, they faced &#8220;terrorist&#8221; mortar attacks, strikes by enemy special forces and unexploded ordnance while using base aircraft to tackle &#8220;wartime&#8221; missions.

Operations began Dec. 11 and were conducted around the clock. Yokota&#8217;s C-130s and UH-1N helicopters flew multiple sorties and sirens directing unit movements sometimes were heard before 7 a.m. and after 9:30 p.m.

Capt. David Westover, a wing spokesman, said the base received six queries and two noise complaints during the six-day ORE.

&#8220;As standard procedure, we notified the local government and community officials well in advance of the exercise,&#8221; he said. &#8220;We worked closely with the local Yokota Defense Facilities Administration Office to help address the inquiries they received.&#8221;

The grueling session took a toll on participants as well, Davidson conceded.

And perhaps they feel a little better about the Operational Readiness Inspection by PACAF, slated for March 12-21.

&#8220;Every exercise has brought us closer to being prepared for the ORI,&#8221; Goodwin said. &#8220;This one allowed us to fine-tune several of our processes, especially deployment, reception and defending the base. Wing OREs are an opportunity for us to prepare for real-world contingencies. Our teamwork and synergy as a group is what should show the Pacific Air Forces inspector general team that we&#8217;re ready to do just that.&#8221;