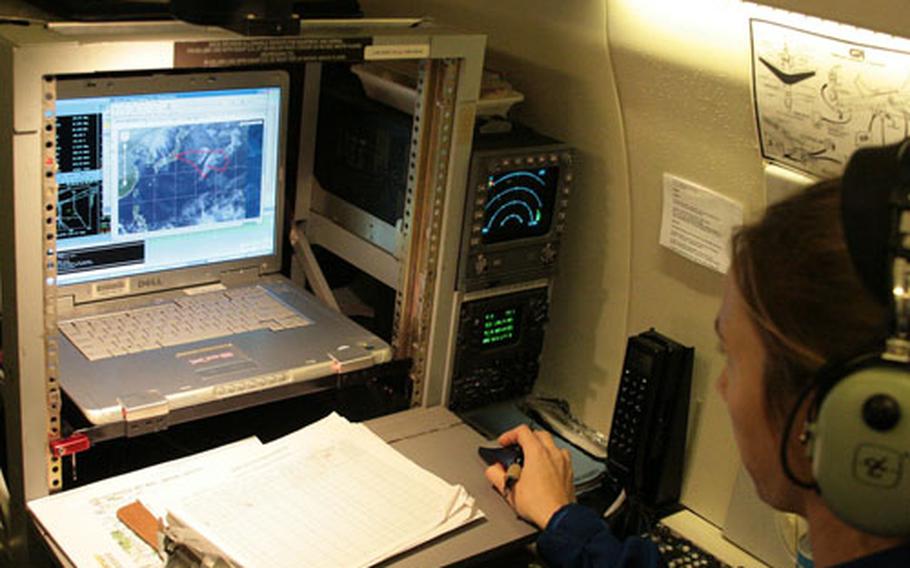 NOAA meteorologist Jess Williams highlights the track she and her fellow NOAA crew members took Tuesday night as they skirted a storm brewing over the Pacific Ocean that expected to hit California over the weekend. (Charlie Reed / S&S)

NOAA meteorologist Jess Williams highlights the track she and her fellow NOAA crew members took Tuesday night as they skirted a storm brewing over the Pacific Ocean that expected to hit California over the weekend. (Charlie Reed / S&S) 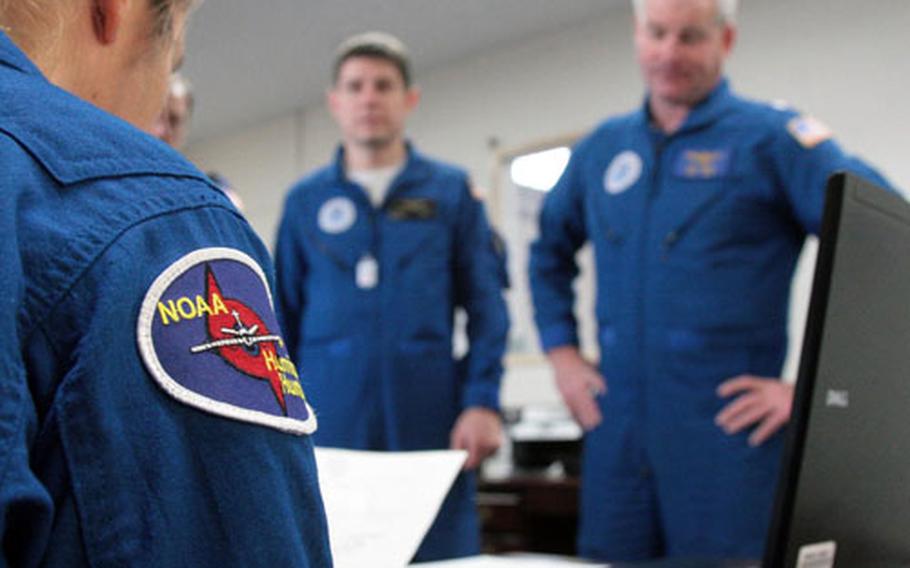 The NOAA hurricane hunter patch illustrates the agency’s most high-profile mission in the Atlantic Ocean. But crew members seen here preparing for a flight Tuesday are temporarily working from Yokota Air Base, Japan, as part of NOAA’s Winter Storm Reconnaissance Program, which tracks storms brewing the Pacific and headed for the United States. (Charlie Reed / S&S) 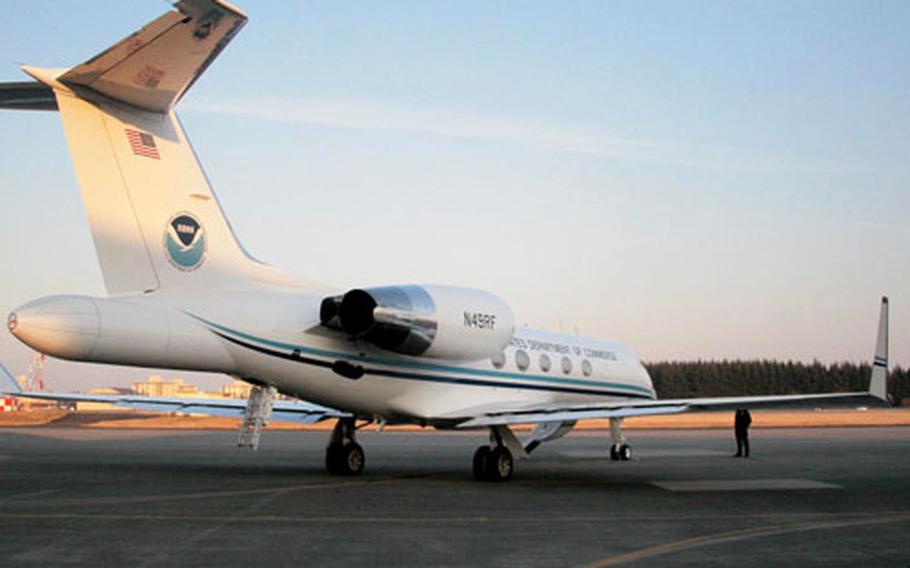 NOAA’s Gulfstream IV prepares for take-off Tuesday at Yokota Air Base, Japan. The jet is used to help gauge storms and improve weather forecasts, and will provide forecasting data for the upcoming 2010 Winter Olympics in Vancouver. (Charlie Reed / S&S)

45,000 FEET OVER THE PACIFIC OCEAN - Chasing a weather system brewing Tuesday night over the dark waters between Japan and Hawaii, a crew from the National Oceanic and Atmospheric Administration completed the first of four missions to help predict how the soon-to-be storm will affect California this weekend.

They are collecting data to enhance NOAA forecasting models ahead of the expected heavy rains, which have the potential to create flash floods and mudslides in typically dry, wildfire-plagued southern California.

"If we can get more data out in front and help generate a better forecast then it could save lives and property," said Cmdr. Jeff Hagan, aircraft commander and one of 300 NOAA Corps officers. He&#8217;s part of a 10-man NOAA team operating temporarily from Yokota Air Base in Japan.

They arrived at Yokota earlier this month and will stay through February as part of the NOAA Winter Storm Reconnaissance Program. It is typically based in Alaska and Hawaii but was expanded last year to include a stint in Japan to get earlier data about weather bound for the United States, which predominately originates in the Pacific and travels east.

"It&#8217;s improved the forecasts. That&#8217;s why we came back (to Japan)," said Jack Parrish, project manager and flight meteorologist.

Earlier this, week a NOAA jet conducted aerial surveys of Haiti to help responders assess damage and plan recovery efforts in the aftermath of the earthquake. A NOAA plane also was among the first to survey damage of the World Trade Center from the skies after 9/11.

During the Yokota-based crew&#8217;s eight-hour mission over the Pacific Ocean, the work focused on providing data in hopes of avoiding disaster. The team launched 21 small tubes, called sondes, that measure temperature, humidity, wind speed and pressure as they fall to earth, working like weather balloons in reverse.

Before the sondes were deactivated and swallowed by the ocean, the data was transmitted back to the aircraft &#8212; a Gulfstream IV named "Gonzo" &#8212; where it was verified and immediately fed into NOAA forecasting models in Maryland.

Though each disposable weather-gauging sonde costs $600, similar information could only be gathered by multiple ships or weather stations in the Pacific. Multiple flights could also collect the same data grabbed by the sondes, though the cost of fuel and flight time make that option impractical, engineer Jim Roles said.