Weather or not, 37th Marine Corps Marathon is ready to roll 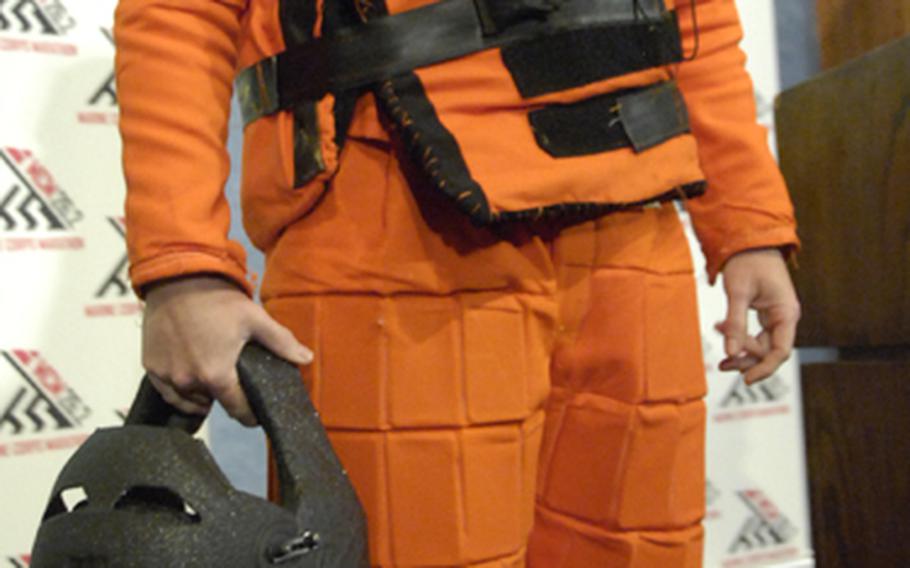 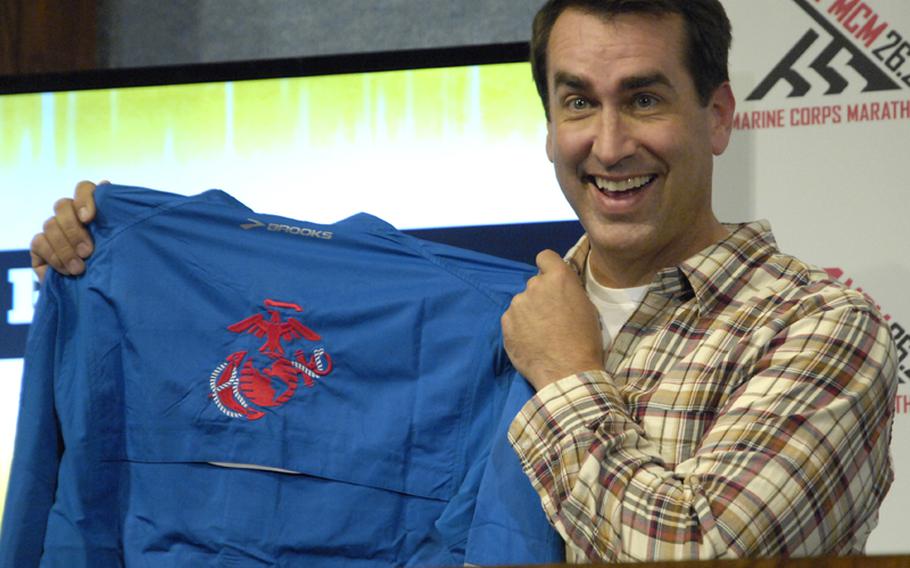 Buy Photo
Actor and comedian Rob Riggle, a Marine Corps lieutenant colonel, displays the jacket he received in his role as starter for the 2012 Marine Corps Marathon. (Joe Gromelski/Stars and Stripes) Buy Photo
Col. David Maxwell, Commander of Marine Corps Base Quantico, and Christos Panagopoulos, Ambassador of Greece to the U.S., pose with the winner's laurel. (Joe Gromelski/Stars and Stripes) 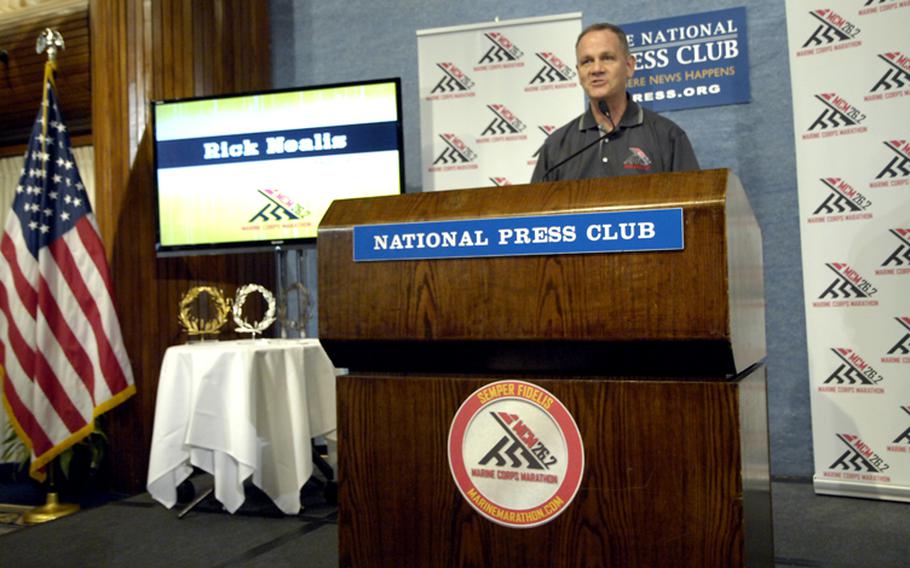 Buy Photo
Lauren Lee, a 2012 contestant from “The Biggest Loser,” will be running her first Marine Corps Marathon in 2012, but that doesn't stop her from dreaming about taking home the first-place laurel. (Joe Gromelski/Stars and Stripes)

WASHINGTON &ndash; There&rsquo;s a good chance participants in Sunday&rsquo;s Marine Corps Marathon could be running with the wind &ndash; or against it &ndash; while getting drenched by Hurricane Sandy come race time. But event organizers seem unfazed by a forecast that is calling for an 80-percent chance of rain on race day.

Weather is not an issue for Marines, Race Director Rick Nealis joked Friday during a briefing on the annual Marine Corps-sponsored event. &ldquo;Come on, the Marine Corps is amphibious. We go to sea with the Navy.&rdquo; Marines love the rain, Nealis assured the crowd at the National Press Building in Washington, D.C. &ldquo;We call it liquid sunshine.&rdquo;

Weather considerations aside, event organizers are pleased with the level of involvement in this year&rsquo;s marathon and other events slated for the race weekend.

Marc Goldman, a marketing manager for the Marine Corps Marathon, noted that 30,000 running slots sold out in just 2 hours and 41 minutes when registration for the event opened in March.

&ldquo;These people really wanted to be here,&rdquo; Goldman said of the race participants. &ldquo;They come from every state and 54 countries.&rdquo;

The annual marathon, though, is much more than just a race, Goldman said. The &ldquo;people&rsquo;s marathon,&rdquo; as it's become known, gives participants a chance to accomplish something significant. Some, Goldman added, run to pay tribute to a servicemember serving in the military or for one who has fallen in combat. Many run to demonstrate their patriotism and their support of those in uniform.

&ldquo;Others demonstrate defiance in the face of illness, whether their own or a loved one&rsquo;s,&rdquo; Goldman said. &ldquo;We welcome many finding a new path in life having returned from battle broken or not whole. There are those who use the marathon as a tool to reform their lifestyle and introduce physical fitness.&rdquo;

The marathon also serves as an opportunity for the Marine Corps to showcase the emphasis it puts on physical fitness, organizational skills and community involvement, Goldman said.

Col. David Maxwell, commander of Marine Corps Base Quantico, zeroed in on the organizational aspect of the event. He pointed out that roughly 2,000 Marines and sailors will be on hand throughout the weekend to execute the organizational plans of the marathon. They do that, Maxwell said, by using operational planning processes typically used in the military.

Unlike other well-known marathons sponsored by big cities, the Marine Corps Marathon is unique in that Marines primarily provide the support, Maxwell said. And to have the race in Washington D.C. is an added benefit. &ldquo;There&rsquo;s nothing more motivating than running through the nation&rsquo;s capital, among those symbols of freedom and liberty &hellip; To be able to do it here, is a great opportunity.&rdquo;

Expected to draw more than 100,000 spectators, the Marine Corps Marathon has grown into one of the best marathon&rsquo;s in the world, said David Willey, the editor-in-chief of Runners World Magazine. Willey, who planned to run in Sunday&rsquo;s race, noted that his magazine has developed a deep respect for the Marine Corps event because it is consistent with the Runners World philosophy.

Willey said his organization recognizes the tension that exists between runners who train to win marathons and those who get involved for other reasons, such as raising money for charities. However, he said he believes &ldquo;running is big enough for everyone.&rdquo; Runners World chose to participate in and partner with the Marine Corps Marathon, he said, because of how inclusive it is. &ldquo;It is a very beginner-friendly course. You don&rsquo;t have to qualify to be here. You don&rsquo;t have to enter a lottery. There is no mandatory fund-raising component to it. It is open to all runners to challenge themselves. It&rsquo;s very spectator friendly ... There are all kinds of reasons why this is one of the very best marathons in the world.&rdquo;

Retired Marine Corps Col. Al Richmond, who is among a handful of people who have run in every Marine Corps Marathon, plans to run his 37th race on Sunday. At 73, Richmond said he has two goals in mind: &ldquo;Finish the race and live.&rdquo;

Richmond acknowledged Friday that originally he had no interest in running marathons. In high school, he said, he was a football halfback and ran the 440, but wasn&rsquo;t interested in running long distances. In 1976, when he was in the Marine Corps Reserve (which, he said, originally hosted the race) he was part of a team that organized the event. One day, after running three miles to prepare for an upcoming physical fitness test, he saw a Reserve Marine colonel come in pumped up about running 10 miles in preparation for the marathon. &ldquo;And my reaction was, &lsquo;well, I&rsquo;ll be darned, if that guy can run it, so can I.&rsquo;&rdquo;

And so began Richmond&rsquo;s odyssey of running every Marine Corps Marathon since. He said it was probably after the 20th race that he decided to keep doing them. Richmond said he saw a 90-year-old retired Marine colonel run in last year&rsquo;s marathon, and so he figures he might have a few more under his belt.

Special attractions at this year&rsquo;s race:

Rob Riggle, comedian, actor and Marine Corps Reserve lieutenant colonel, will serve as the grand marshal to start the race.National Geographic Channel's "Rocket City Redneck," Dr. Travis Taylor, will run in an experimental suit designed to give servicemembers full-body protection;British Maj. Iain Church will attempt a Guinness World Record for running the fastest marathon while wearing a 75-pound protective bomb disposal suit;Single blade runner and Army veteran Lt. Cameron Kerr will run in the 10K race. Kerr, selected at last year&rsquo;s marathon event to embark on a polar expedition to Antarctica, lost his left leg while serving in Afghanistan.The Bordoni family who will join six Marines from the 1st Battalion, 6th Marines to run in honor of Cpl. Christopher Bordoni, who was just 21 years old when he was killed by a suicide bomb attack while serving in AfghanistanLauren Lee, a 2012 contestant from "The Biggest Loser," is set to run her first marathon.Marathon statistics33,772 registered to run in marathon9,613 servicemembers running the marathon11,547 runners in their first marathon22,049 runners in their first Marine Corps Marathon10,000 registered to run in 10K race3,600 registered to run in Healthy Kids Fun Runbongioannic@stripes.osd.mil