Weather, logistics delay relief missions out of Bagram Air Base 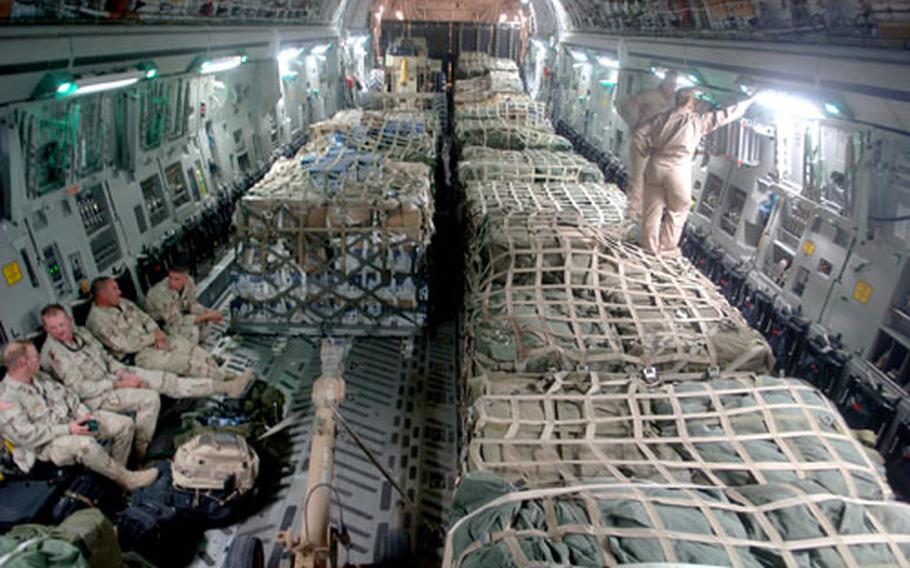 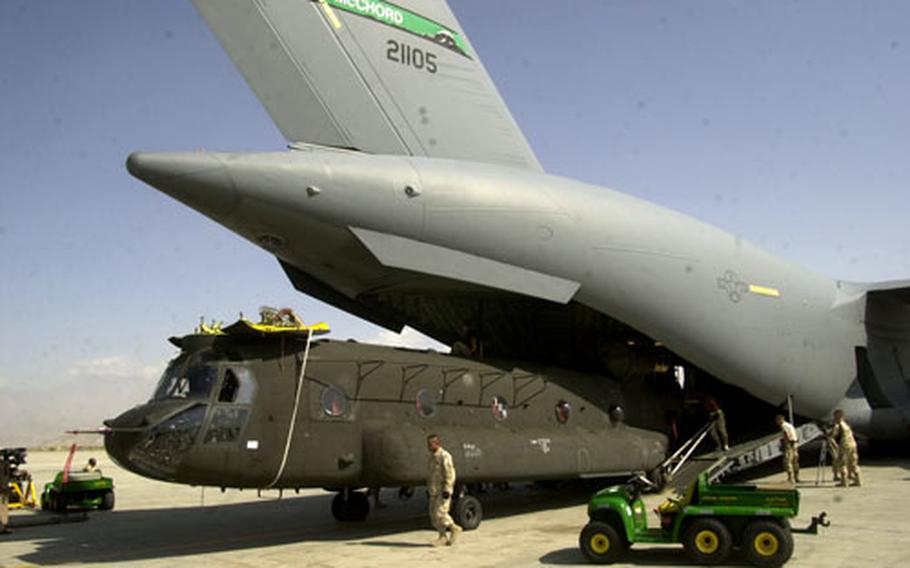 A U.S. Army CH-47 helicopter that will be used for earthquake relief efforts in Pakistan was unloaded Sunday morning at Bagram Air Base, Afghanistan, from a U.S. Air Force C-17 Globemaster. The helicopter will be assembled at Bagram and then begin flying relief missions in Pakistan. (Steve Mraz / S&S) 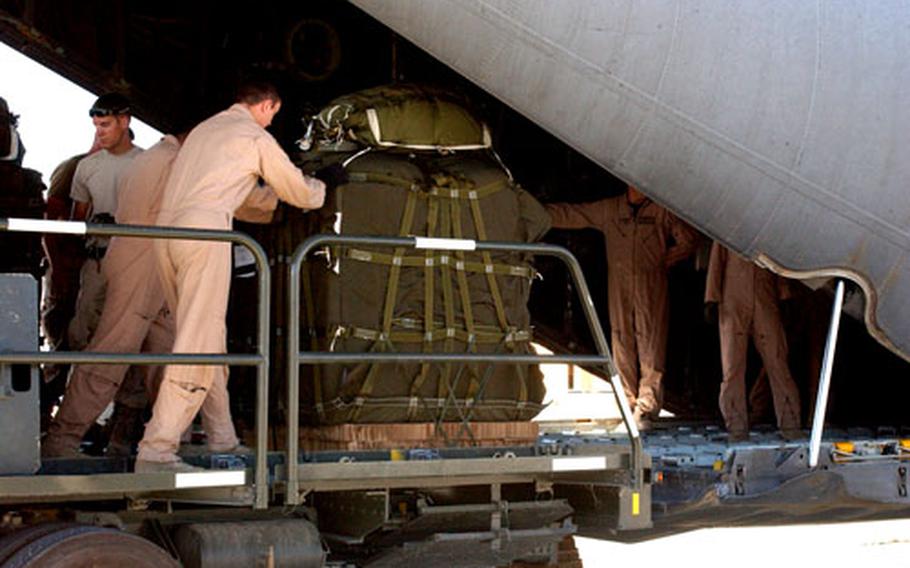 Servicemembers at Bagram Air Base push a pallet full with humanitarian aid supplies into a C-130 on Oct. 13. (Matthew Oda / U.S. Army) 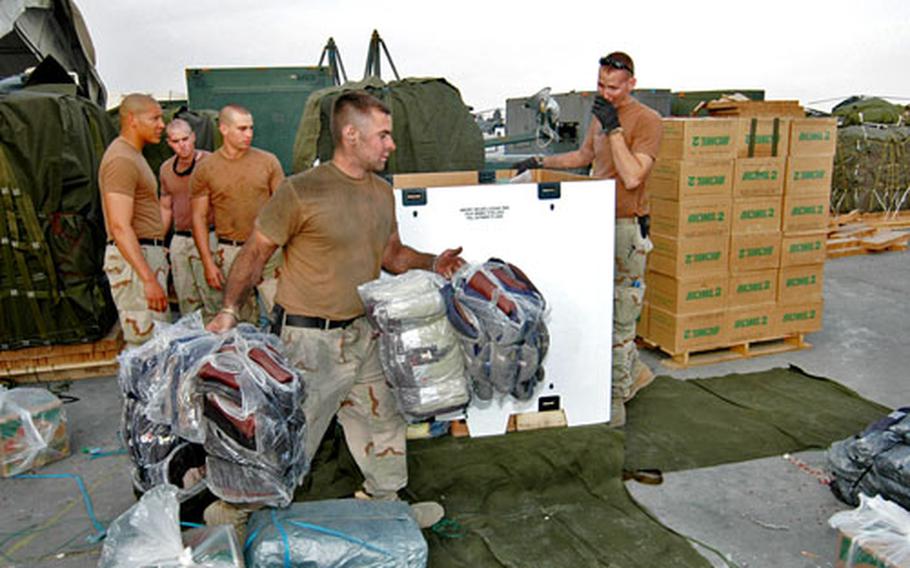 Spc. Bryan Jackson, front, and other parachute riggers with Logistical Task Force 307, based out of Bagram Air Base load pallets with humanitarian supplies this week. The supplies are supposed to be air-dropped into remote areas of Pakistan ravaged by the recent eathquake, but the mission has been delayed four times so far. (Adrian Schulte / U.S. Army)

BAGRAM AIR BASE, Afghanistan &#8212; U.S. military airdrop missions out of Bagram to Pakistan, bound for victims of the Oct. 8 earthquake, have been canceled since Saturday because of weather and coordination issues with Pakistani government officials.

Bad weather in Pakistan scrubbed missions scheduled for Saturday and Sunday. Flights set for Monday and Tuesday were canceled as well while issues are being worked out among officials.

&#8220;The issue is coordination between governments to make sure the supplies are dropped where [the Pakistanis] want them,&#8221; said U.S. Marine Corps Maj. Jeff Sammons, a public affairs officer with the Disaster Assistance Center in Islamabad, Pakistan&#8217;s capital.

The first and only airdrop mission so far from Bagram was Oct. 14 when a U.S. Air Force C-130 parachuted about 20,000 pounds of supplies into Pakistan. A C-130 airdrop mission scheduled to depart Bagram early Monday morning was canceled minutes before takeoff.

Despite the delays, significant U.S. military relief has reached Pakistan. Two U.S. Air Force C-17 Globemasters and three C-130 Hercules aircraft have transported more than 141,300 pounds of supplies, according to a press release. Navy Helicopter Sea Combat Squadron 26 sent two aircraft and 25 sailors to Pakistan on Saturday and Sunday, according to a press release. Days after the earthquake, an Air Force C-17 from Bagram landed in Islamabad and unloaded supplies.

Since the earthquake, nearly 1.2 million pounds of relief supplies have been delivered to Pakistan through the assistance center, Sammons said. U.S. Navy ships have arrived in Karachi and are unloading engineering equipment to be used in repairing Pakistani roads, Sammons said.

A total of 18 aircraft from the U.S., German and Afghan governments are on hand at the center. Helicopters have evacuated 2,730 casualties, Sammons said.

According to The Associated Press, more than 55,000 people died in the 7.6-magnitude quake that rocked Pakistan, India and Afghanistan. Of those, 54,000 died in Pakistan.

Crews at Bagram have been working around the clock to prepare loads to be airdropped into Pakistan. U.S. troops from the 307th Forward Support Battalion, 82nd Airborne Division, out of Fort Bragg, N.C., have spearheaded the preparation. The U.S. Army&#8217;s 24th Quartermasters, the 3rd Special Forces Group and members of an Air Force expeditionary squadron assisted.

The troops rigged 21 pallets and put parachutes on another 51 bundles in less than six hours during the evening of Oct. 12. The task would have taken roughly 12 hours without the additional help, said Chief Warrant Officer 1 Daniel Christy, airdrop systems technician with the 307th.

Being part of a humanitarian aid operation is part of the overall mission out of Afghanistan, said Pfc. Jason Brannon, 26, from the Pittsburgh area.