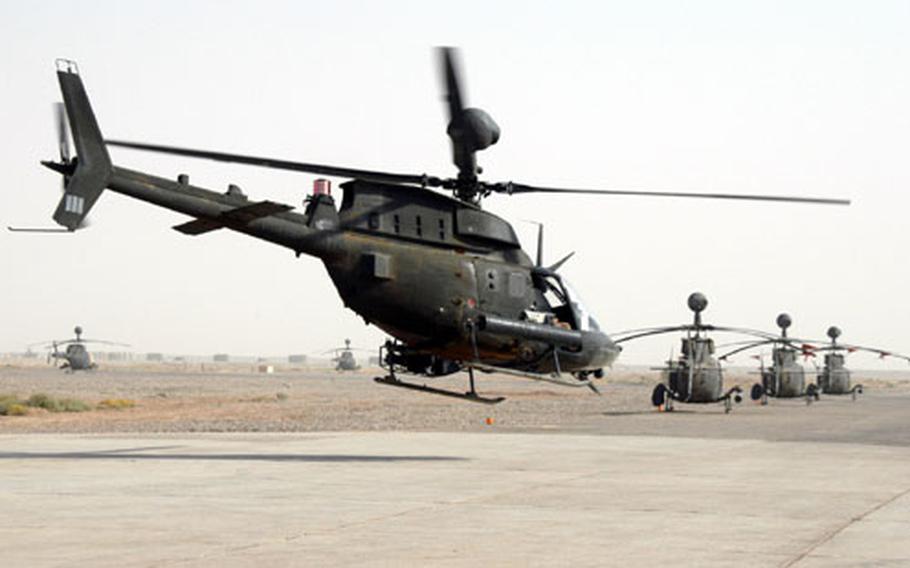 A Kiowa Warrior takes off from FOB McKenzie in central Iraq Tuesday morning, despite a growing dust storm. The pilots at McKenzie, who are with the 1st Squadron of the 17th Calvary of the 82nd Airborne, contend with hazy, sand-filled air that has canceled some missions. (Teri Weaver / S&S)

FOB MCKENZIE, Iraq &#8212; In a place where the June weather can be summed up as hot, hotter and too bleeping hot to politely describe in newsprint, Army pilots here are constantly asking about conditions outside.

Sandstorms and sand-filled haze have been blowing in from the west for the last week or so, forcing crews to shorten and even cancel missions, according to officers here.

It&#8217;s a frustration that cannot be avoided. If visibility drops below a certain distance, the squadron&#8217;s Kiowa Warrior helicopters must stay home and be on standby to answer emergency calls. If the sand really starts whirling, then the squadron commander has to make the tough call to keep the crews grounded until the haze clears.

He sounded optimistic, but the truth was, the commander hadn&#8217;t flown in four days, and he, too, was getting antsy to be in the air.

First Squadron&#8217;s job is to keep ground patrols safe. The pilots do their own presence patrols, flying low and looking for roadside or vehicle bombs, rocket-launching sites and insurgents planning ambushes.

The squadron schedules missions 24 hours a day. They want to be in the air to look for signs of the insurgency and to answer any calls for help from ground troops. They fly Kiowa Warriors, two-seat helicopters that are nimble enough to hover only a few dozen feet from the ground.

The view from that vantage point pays off. First Lt. Timothy Harloff, 25, of Sebastian, Fla., found five rockets rigged with a timed detonation device aimed at their own base.

The squadron has been in Iraq since December, flying over a swath of land the size of West Virginia. They&#8217;ve logged more than 15,000 flight hours in their helicopters, four times the amount they&#8217;d be flying back home at Fort Bragg, N.C., according to Muth.

They&#8217;ve never had to cancel a mission because of a faulty aircraft.

Muth was set to go on a late afternoon mission this week for a four-hour patrol. He and his crew knew the flights would be cancelled, but they continued to have mission briefings, prepare the aircraft, and check and recheck the weather reports, just in case.

They finally admitted defeat about halfway through their scheduled flying time.