Weary of bloodshed, a Taliban leader in Afghanistan weighs reintegration 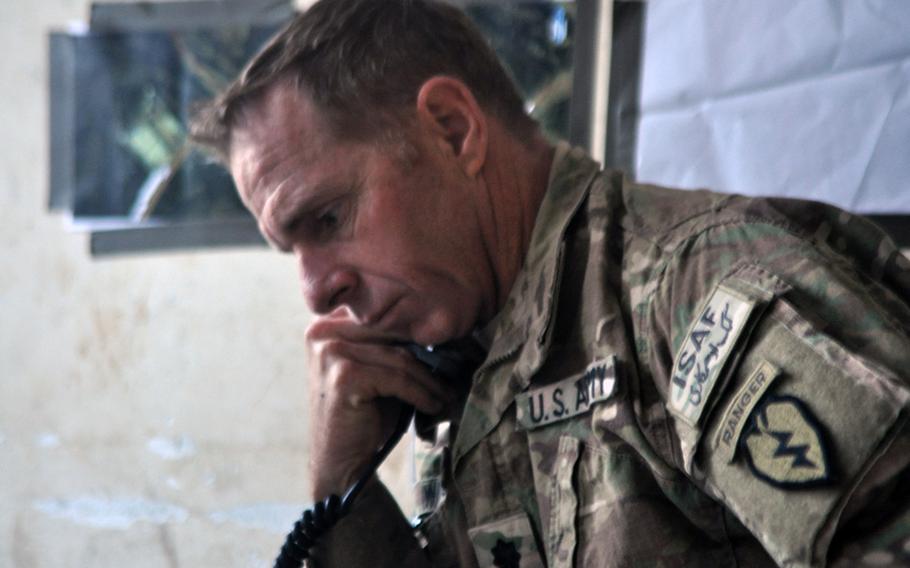 Lt. Col. Dan Wilson visited the district center of Nishigam in Kunar province days after a Dec. 9 suicide bombing outside a nearby mosque killed six people. ''I would tell you to not get discouraged,'' he said to local officials. (Martin Kuz/Stars and Stripes)

NISHIGAM, Afghanistan &mdash; The Taliban leader hid his face beneath a black ski mask as he rode in the back seat of an Afghan army pickup truck. He knew to avoid needless risk.

If the wrong person saw him, his life might end before he could convert from insurgent to peacemaker.

The truck rattled into the parking lot of the Nishigam government center in the Ghaziabad district of northern Kunar province. The walled compound sits five miles from Pakistan in one of Afghanistan&rsquo;s most violent regions.

The man had agreed to meet here with Lt. Col. Dan Wilson, commander of the 2nd Battalion, 27th Infantry Regiment.

Wilson wanted to persuade the commander to &ldquo;reintegrate.&rdquo; The term refers to enemy fighters who receive amnesty in exchange for aiding coalition forces and publicly renouncing the Taliban.

The nationwide program has lured few insurgents in Kunar. There is a powerful deterrent: Repudiating the Taliban carries the threat of death for an ex-militant and his family.

Recent events had magnified the urgency of the covert meeting.

Five days earlier, on Dec. 9, a suicide bomber killed six people outside a mosque a quarter-mile from the government center.

The victims included the Ghaziabad police chief and an Afghan intelligence officer.

The assailant, a 12-year-old boy, had crossed the border from Pakistan and found sanctuary in Nishigam.

The attack cut deep for Wilson, 48, of San Diego.

He worried that the bombing imperiled the fragile progress his unit had made against the Taliban-led insurgency in Kunar&rsquo;s borderlands.

The battalion, stationed at Forward Operating Base Bostick, about 15 miles north of Nishigam, patrols a 40-mile stretch of the Kunar River Valley, a winding seam in the Hindu Kush mountains.

Coaxing an adversary to switch sides could reduce the unrest in Ghaziabad and, he hoped, nurture a wider perception of an enemy in decline.

&ldquo;If he reintegrates, other [militants] could do the same, and then people in the villages start to feel like they can stand up to the Taliban.&rdquo;

Afghan soldiers guided the insurgent from the truck into an unlit room. He pulled off his mask.

His thick black hair, swept to one side, nested above small, almond-colored eyes. Deep lines rutted the cheeks of his narrow face and disappeared into an ample beard.

He had the coarsened skin and sinewy build of a man who had devoted years to roaming the Hindu Kush, hunting soldiers.

Wilson entered. At 6 feet 2, he stood several inches taller than his rival commander, who wore a white shalwar kameez under a green camouflage jacket that swaddled him like a blanket.

The two shook hands not far from where their men have often sought to kill each other.

&ldquo;I am glad we can talk,&rdquo; Wilson said. He patted his chest with his right hand, a gesture of sincerity in Afghan culture.

&ldquo;It is important for us to find a way not to fight.&rdquo;

The insurgent tapped his chest in turn. &ldquo;Thank you for this meeting,&rdquo; he said. He spoke Pashto and had a high, grating voice, as if he were being gently choked.

&ldquo;It is good to talk with the Americans.&rdquo;

They sat on the floor as twilight&rsquo;s shadows blackened the room.

Wilson asked him to recount his path to war.

He recalled fighting against the Taliban before the U.S. invasion in 2001. He laid down his gun after the Islamic regime fell, only to wind up in jail years later when Afghan officials accused him of working with the Taliban, an allegation he denied.

His family paid a fine for his release. He pursued his revenge on the government by engaging in the activity for which he had been arrested. He joined the insurgency, leaving behind his village to move into the mountains.

At 45, he has tired of bloodshed. Night raids by coalition forces have killed six members of his family, he told Wilson.

&ldquo;Everything in the mountains has been destroyed,&rdquo; he said. He spat into a clay goblet he had lifted to his lips. &ldquo;We are coming back to the villages. We want to have our lives again.&rdquo;

The insurgent said he controlled upward of 100 fighters in Ghaziabad, a number confirmed by U.S. and Afghan sources.

&ldquo;I am the commander of this area,&rdquo; he said. &ldquo;No one will fire on you if I tell them not to.&rdquo;

Wilson nodded. &ldquo;I want to bring good things to your people,&rdquo; he said. &ldquo;If we can build a trust, I think it is possible.&rdquo;

He discussed details of reintegration, explaining that funding exists to create jobs for former insurgents to provide village security and build roads, bridges and other civic works. He emphasized one caveat. &ldquo;I can&rsquo;t bring projects and good things to your district without you going public,&rdquo; Wilson said. &ldquo;Are you aware of that?&rdquo;

The fighter understood. But he was not ready. He needed to ensure his family&rsquo;s safety.

Wilson replied that he would wait. &ldquo;I will never lie to you,&rdquo; he said. &ldquo;I promise you that.&rdquo;

The men agreed to talk again. They shook hands once more, and the Taliban commander offered a promise of his own.

&ldquo;I guarantee you I will bring you 1,000 people to be on the side of government,&rdquo; he said.

Wilson patted his heart. &ldquo;Thank you for coming,&rdquo; he said. &ldquo;If we can work this out, you and I will fight together.&rdquo;

The lieutenant colonel left the room. The insurgent stayed a few more minutes. When it was time to go, he put on his mask.