Soldiers at a Mass in the field in Vietnam in November, 1966. (Allen Fasoldt/Stars and Stripes)

Soldiers at a Mass in the field in Vietnam in November, 1966. (Allen Fasoldt/Stars and Stripes) 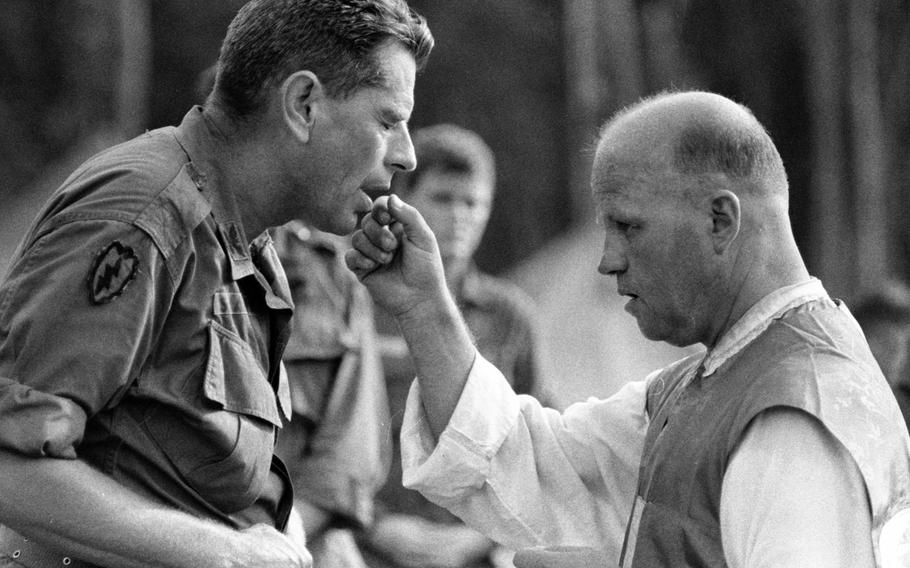 Father Michael S. Filip of Detroit gives Communion to a soldier in the field in Vietnam in NOvember, 1966. (Allen Fasoldt/Stars and Stripes)

PLEIKU, Vietnam — The day after the bloody battle of Dragon Gulch the men of the 25th Inf. Div.'s A Co., 1st Bn., 14th Inf., "Golden Dragons" were having a well-earned rest.

Some were already old pros prior to tackling the tortuous trek across the densely-wooded slopes of the central highlands where, in a fierce fight, they killed 24 enemy and captured two. Some were raw rookies. Now all were combat veterans.

The leg-weary infantrymen recalled brave deeds and miraculous escapes. They told of how Lt. Terence O'Brien of Vicksburg, Miss., led a small group of men forward in the face of heavy fire and began lobbing grenades on the enemy until the firing ceased.

"Wasn't Hennan blessed?" said one youth. He was referring to PFC David M. Hennan of Farmington, Minn., who had the heartstopping experience of having a "live" grenade dropped in his lap. The trooper coolly returned the explosive to the sender and none too soon. His swift action probably saved his life and the lives of four companions close by.

Capt. Michael D. Sparago, of Brooklyn, N.Y., battalion surgeon, was not his usual jolly self. Doc had just lost one of his medics.

"He was one of the very best," he said. He was "shot in the back while attending the wounded."

The battalion's Catholic chaplain, Father Michael S. Filip of Detroit, celebrated Mass and said special prayers for those brave men who had paid the supreme sacrifice.

Capt. Ora L. Boss of Green Forest, Ark., A Co. commander, chatted about the previous day's action. He had a special word of praise for each man.

Lt. Col. Gilbert Procter Jr., of Nogales, Ariz,, the battalion commander, also checked to see that his men were being well taken care of.