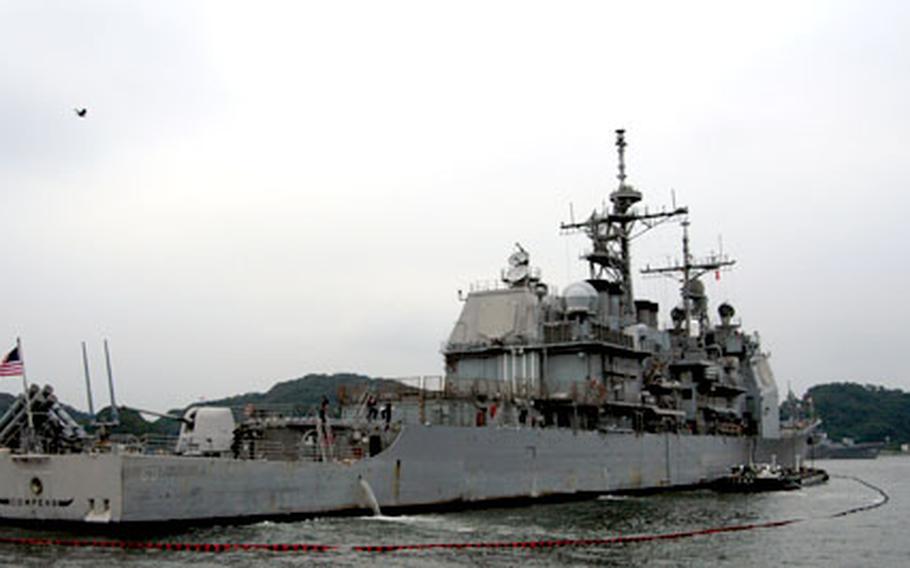 The USS Cowpens prepared to head to sea Friday evening ahead of typhoon Yagi, which was forecast to pass near Yokosuka Naval Base this weekend. (Allison Batdorff / S&S)

Yagi strengthened briefly into a super typhoon overnight Thursday before weakening Friday but picking up forward speed as it tracked northwest toward the Tokyo area.

Meanwhile, 7th Fleet assets set sail from Yokosuka Naval Base as a precaution, though the storm didn&#8217;t appear to be a threat to land.

But Yagi was forecast to curve sharply northeast and churn well east of Tokyo.

Forecast closest point of approach to Yokosuka is 285 miles southeast at 4 a.m. Sunday.

A base spokesman said Yokosuka should feel little of Yagi&#8217;s Category 2 sustained winds of 100 mph and 127 mph gusts at its center.

A handful of 7th Fleet vessels pulled out to sea starting Friday afternoon.

Officials were waiting to see what Yagi might do before deciding to send the aircraft carrier USS Kitty Hawk or the 7th Fleet flagship USS Blue Ridge out of port.

Further inland, Yokota Air Base remained in TCCOR 4 Friday evening. Capt. Warren Comer, 374th Airlift Wing spokesman, said the base was bracing for wind gusts of up to 35 mph on Sunday afternoon, with 1&#189; inches of rain.

Yagi is forecast to pass 315 miles southeast of Yokota at 4 a.m. Sunday.

Once past Yokosuka and the Tokyo-Kanto Plain area, Yagi is forecast to track rapidly east-northeast before gradually dissipating in the north Pacific, according to the Joint Typhoon Warning Center.