‘We will never back down,’ president says 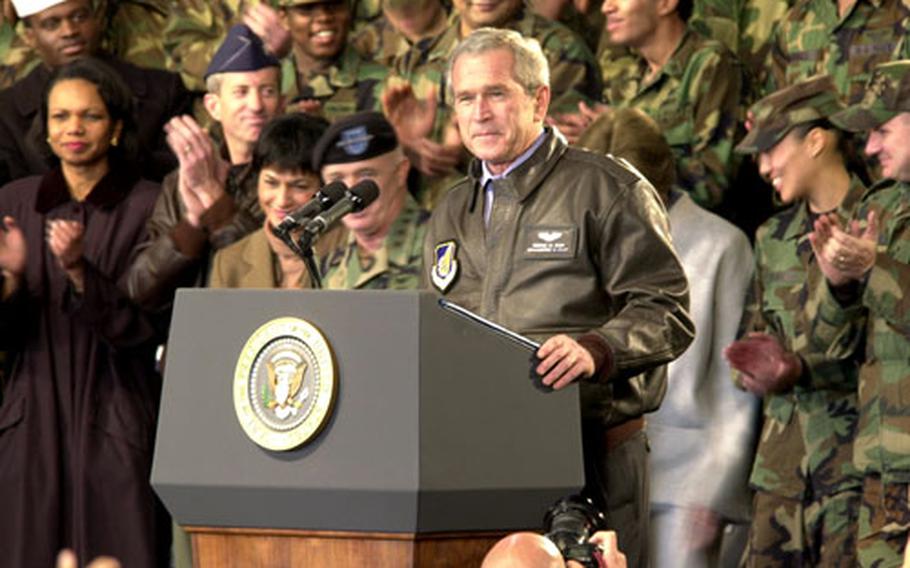 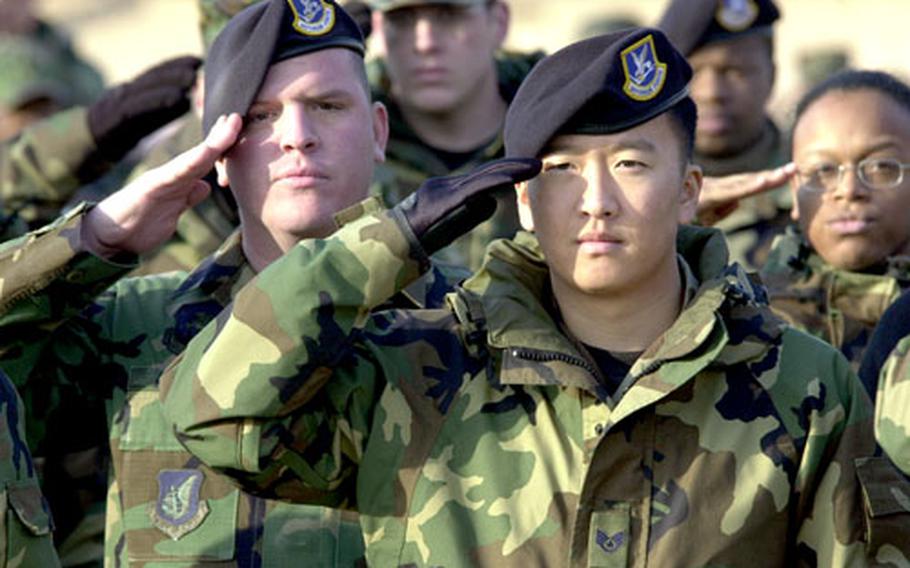 Airmen salute during the National Anthem prior to the president’s arrival. (T.D. Flack / S&S) 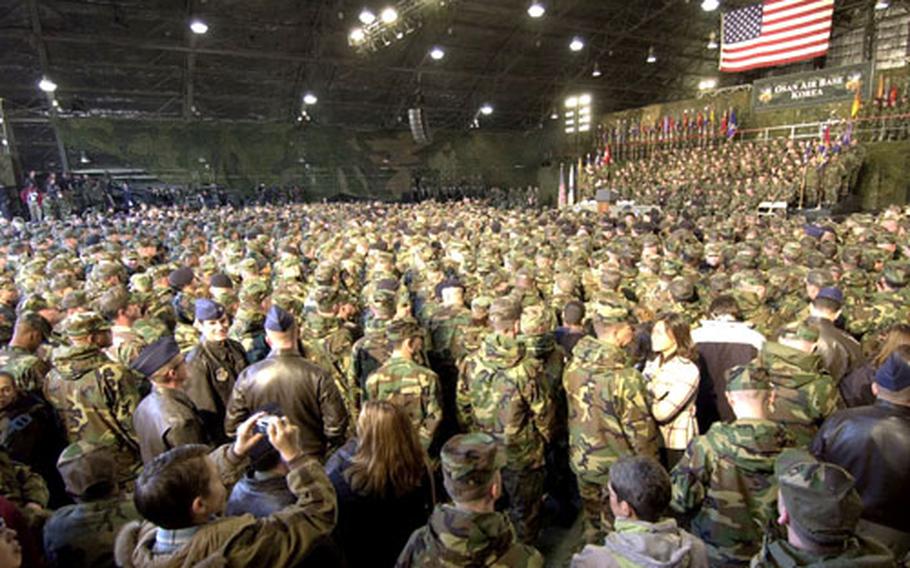 Members of all the services crowd into a hangar Saturday while awaiting the president’s arrival. (T.D. Flack / S&S) 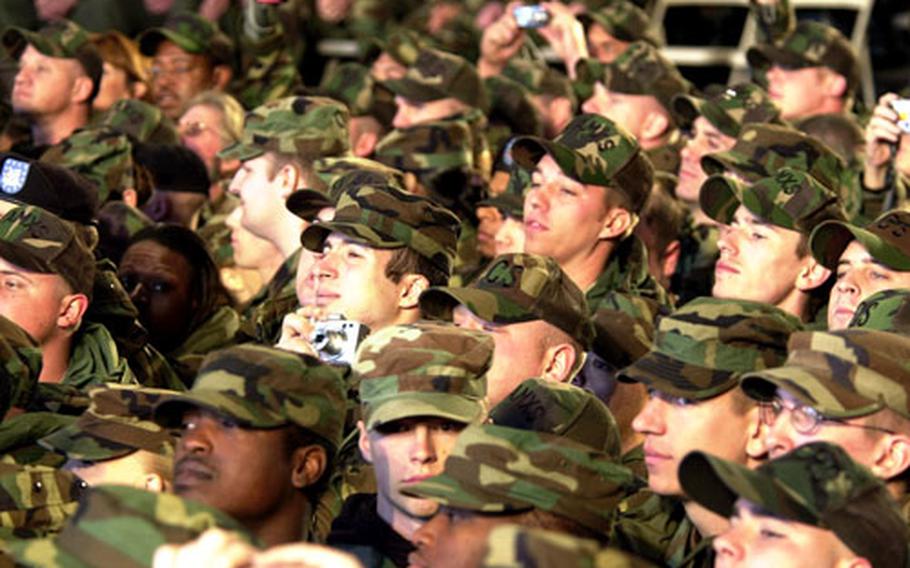 Troops strain to catch a glimpse of Air Force One as it lands at Osan. (T.D. Flack / S&S) 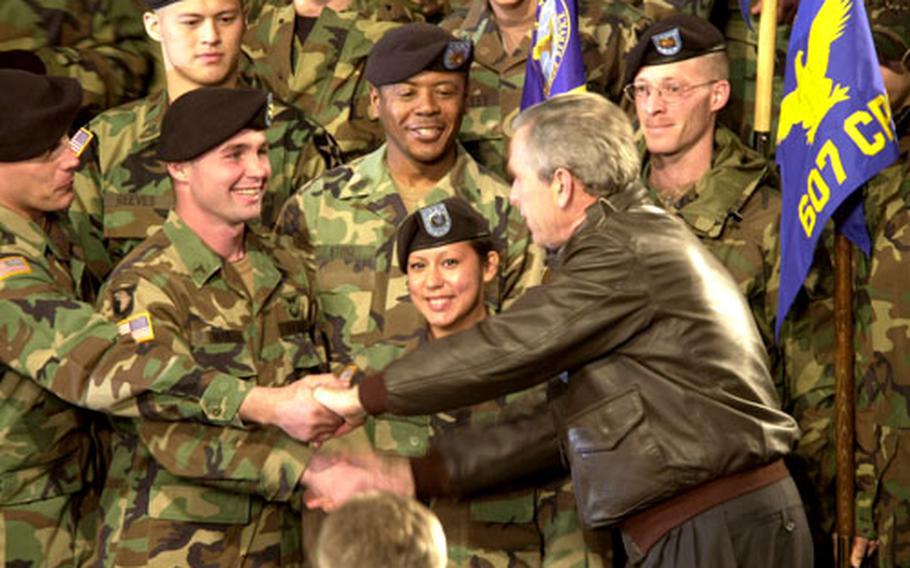 OSAN AIR BASE, South Korea &#8212; The United States will stay in Iraq until there is &#8220;complete victory&#8221; despite calls by some in Washington to withdraw troops, President Bush told a crowd of cheering U.S. servicemembers here Saturday afternoon.

Bush, in South Korea for the annual summit of the Asia-Pacific Economic Cooperation forum, stopped at Osan, headquarters for the 7th Air Force and home of the 51st Fighter Wing. More than 4,000 troops from across the peninsula stood in the cold for hours waiting to get into the hangar where Bush spoke.

The president&#8217;s commitment that &#8220;we will stand and fight and we will win the war on terror&#8221; was his first public comment on his stance since House Republicans and Democrats began battling last week over a proposed resolution to withdraw U.S. troops from Iraq.

On Thursday, Rep. John P. Murtha, a Pennsylvania Democrat and decorated Marine Corps veteran of the Korean and Vietnam wars, proposed the United States begin pulling out. He called for a rapid-reaction force to stay in the region and for diplomacy to be accelerated to achieve stability in Iraq, according to a Los Angeles Times report. Murtha also said the withdrawal should begin only when it could be accomplished safely.

&#8220;In Washington, there are some who say that the sacrifice is too great and they urge us to set a date for withdrawal before we have completed our mission,&#8221; Bush told the troops gathered at Osan. &#8220;Those who are in the fight know better.&#8221;

Bush quoted Maj. Gen. William Webster, a top commander in Iraq, as saying setting a deadline for U.S. troop withdrawal would be &#8220;a recipe for disaster.&#8221; Bush said an exit strategy must be &#8220;driven by the sober judgment&#8221; of commanders on the ground.

Terrorists &#8220;want to use the vacuum that would be created by an American retreat to gain control of a country, to build a base from which to launch attacks on America and to conduct their war against non-radical Muslim governments,&#8221; he said.

He said America must consider Iraq &#8220;as a central front in our war against the terrorists.&#8221;

&#8220;Against such an enemy, there&#8217;s only one effective response: We will never back down, and we will never give in, and we&#8217;ll never accept anything less than complete victory,&#8221; Bush said to cheering and applause.

He said the U.S. strategy is to stand down when the Iraqis stand up. &#8220;When our commanders on the ground tell me that Iraqi forces can defend their freedom,&#8221; he said, &#8220;our troops will come home with the honor they have earned.&#8221;

Bush also thanked the troops &#8212; a sea of green-camouflage uniforms filling the hangar and spilling outside &#8212; for their service.

He also talked about the transformation of the military and how leaders will take advantage of technology to help reshape the U.S. footprint overseas.

&#8220;As South Korea has grown more free and prosperous, it&#8217;s built an increasingly capable military that is now ready to assume a larger role in defending its people,&#8221; he said. &#8220;By assuming some responsibilities that have traditionally been shouldered by American forces, South Korea will strengthen the deterrent on the Korean peninsula and free up some of our combat forces to help us win the war on terror.&#8221;

He ended the speech by saying, &#8220;we don&#8217;t know the course our own struggle will take or the sacrifices that might lie ahead. We do know, however, that the defense of freedom is worth our sacrifice. We know that the love of freedom is the mightiest force in history. And we do know the cause of freedom will once again prevail.&#8221;

Senior Airman Kenneth Johnson, based at Osan, said he follows Bush&#8217;s speeches but Saturday&#8217;s &#8220;just really kind of hit home personally&#8221; because the president talked about South Korea. Johnson agreed that America must stay the course in Iraq.