‘We thought she was safe’ 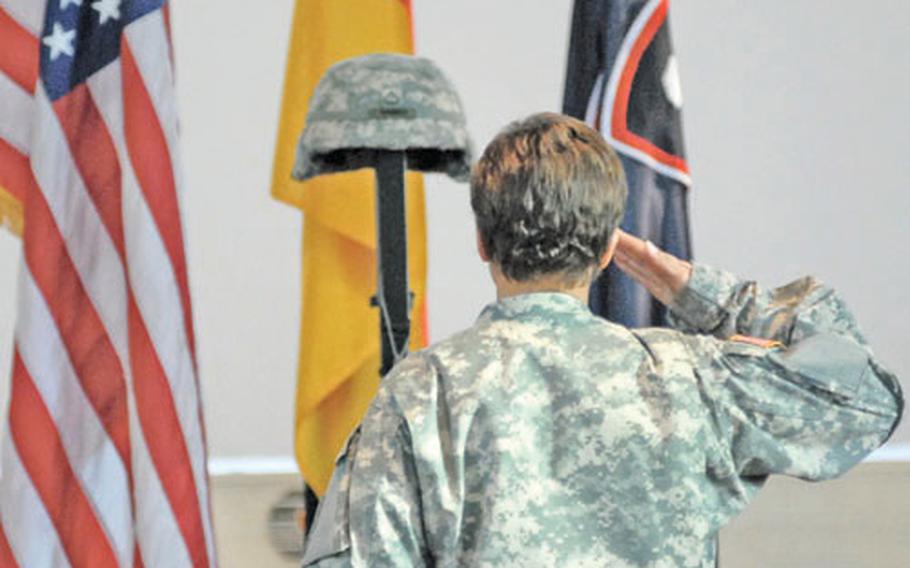 She was her mother&#8217;s fourth-born but the first to graduate from high school. She was athletic, very sociable and possessed the drive and imagination needed to take her all the way from the west side of San Antonio to the boulevards of Paris.

Valerie Gamboa&#8217;s mother worried when her lively, headstrong daughter decided to become the first in the family to join the U.S. Army. Valerie wanted to see the world.

Last April, straight out of the Army&#8217;s course for human resources specialists, Gamboa was sent to the Headquarters Company of the 1st Personnel Command, in Schwetzingen, Germany &#8212; and, her mother thought, to safety.

But on Sunday, two Army officers showed up at Posada&#8217;s door. They told her that her daughter, a 19-year-old private first class, full of life and laughter and recently home for the holidays, was dead.

The Army had released little information about what happened in Gamboa&#8217;s Tompkins Barracks room early Sunday morning. Public announcements had said she was stabbed, that two others suffered knife wounds and that a suspect was in custody.

On Thursday, Pfc. Mario Antwain Lesesne was charged with one count each of murder, attempted murder and assault, U.S. Army Europe officials said in a press release issued late Friday. Lesesne is assigned to the U.S. Army Medical Activity in Heidelberg.

German police said Lesesne was 26 and had been Gamboa&#8217;s boyfriend. The German police arrested him at about 7 p.m. Sunday while walking near the barracks in Schwetzingen after police were tipped he was there, Heidelberg police spokesman Harald Kurzer said.

It was the same man, her mother said, who had wooed her daughter with roses and nice meals. Later, though, Posada said, he had tried to control her.

Lesesne was being held at the Mannheim detention center.

A woman seriously injured in the attack, according to German police, was Gamboa&#8217;s roommate. She and an unidentified man, who was slightly wounded had risked &#8220;their own lives to come to the aid of another,&#8221; according to a chaplain at a military memorial service on Friday.

More than 200 people gathered at the Patrick Henry Village chapel in Heidelberg to mourn and remember Gamboa, who had worked in the personnel shop. &#8220;She brought a lot of life to that shop,&#8221; said 1st Sgt. John Daugherty.

Daugherty said that the company of 162 soldiers and civilians was shaken by what the company commander, speaking at the service, called an &#8220;atrocity.&#8221;

Sgt. Ingrid Ryan-Perry told the mourners that Gamboa was relentlessly curious and full of questions, which at first was funny, then annoying, then endearing to her older friends. &#8220;We had to love her because she was 19 and eager to learn,&#8221; the sergeant said.

Ryan-Perry said that if she, Sgt. Melissa Pontillo and Gamboa weren&#8217;t together, they always knew where one another was.

Gamboa went to a high school that was more than 97 percent Hispanic in a district so poor that the district, the Mexican American Legal Defense and others brought a lawsuit in 1984 before the Texas courts to reform the state system of public-school finance. The lawsuit changed how Texas public schools were financed by compelling the sharing of state property-tax revenues, said district spokesman Mario Rios.

Posada said her daughter had been happy in Germany, impressed with the castles and the beauty and had loved the travel &#8211; to Spain, France and the Netherlands.

She&#8217;d always hated being alone, so living in the barracks, always having a group of people to be with, suited her.

Gamboa&#8217;s body was expected to arrive in Texas on Thursday night, her mother said. She was to be buried Saturday.